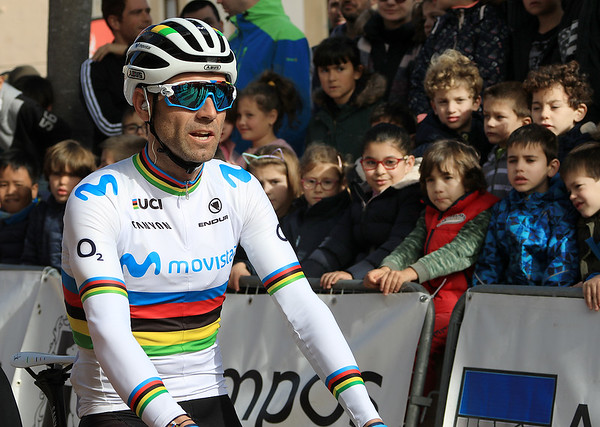 The brilliant world champion, Alejandro Valverde, will be honoured in La Vuelta 19 by wearing bib number 1. The 22 teams that will commence the 74th edition of La Vuelta on the 24th of August at the Salinas de Torrevieja have already submitted their pre-registration forms to the organisation.

Alejandro Valverde won La Vuelta ten years ago. This year, he will start La Vuelta 19 as one of the three ex-winners of the race competing for a new title, along with Fabio Aru (2015) and Nairo Quintana (2016). The Movistar Team has a solid team – with several possible leaders in its midst – among them, the Giro 2019 winner, (Richard Carapaz) and the winner of the Paris-Nice 2018 (Marc Soler) as spearheads. They will ride supervised by an elite duo consisting of Alejandro Valverde and Nairo Quintana.

The Spanish Grand Tour’s 74th edition will also have an important list of South-American candidates with options to win the race: Miguel Ángel López (Astana Pro Team), 3rd in 2018; Esteban Chaves (Mitchelton-Scott), 3rd in 2016 and the potent EF Education First trident formed by the young Daniel Martínez and Sergio Higuita, who will ride with the experienced rider, Rigoberto Urán.

On paper, Movistar Team’s main threat came from Jumbo-Visma, represented by Primoz Roglic and Steven Kruijswijk, third in the last editions of the Giro and the Tour, respectively. On flat stages, they will be protected by Tony Martin and in the mountains by George Bennett, Robert Gesink and Sepp Kuss.

Jakob Fuglsang, winner of the last editions of Liège-Bastogne-Liège and of the Critérium du Dauphiné, had to abandon the last Tour de France due to a fall, and is now seen as Astana’s second card to play. Rafal Majka, 3rd in La Vuelta 15, returns with Bora-Hansgrohe accompanied by the Austrian Tour of Turkey winner (Felix Großschartner). Wilco Kelderman will lead Team Sunweb. Pierre Latour, best young rider in the Tour de France 2018 and practically absent this season following a long convalescence, will lead AG2R-La Mondiale. The Team Ineos opts for the British rider Tao Geoghegan Hart, who will have the opportunity to recoup following his Giro fall.

Tireless rouleur and stage winner in the three Grand Tours, Thomas De Gendt, prepares to face his 3rd three-week race this season following a spectacular stage win in Saint-Étienne in this past Tour de France

Last, but by no means least, is the presence of the Slovenian diamond in the rough, Tadej Pogacar (UAE Team Emirates), winner of last year’s Tour de l’Avenir and of the Tour of California this season. La Vuelta 19 will be the first grand tour for this promising rider.
@ASO

With Richard Carapaz’s victory in the Giro d’Italia and Egan Bernal’s victory in the Tour de France, Latin American riders have two Grand Tours under their belts in 2019, equalling almost those accumulated by their predecessors over the last three decades (Herrera’s La Vuelta 1987 and Nairo Quintana’s Giro 2014 and La Vuelta 16). The 74th edition of La Vuelta could set a new record for the continent and Nairo Quintana, Rigoberto Urán, Miguel Ángel López and Richard Carapaz are some of the riders hoping to win it.

Chris Froome, Geraint Thomas and Simon Yates: in 2018, three different British riders were able to win the three Grand Tours of the annual cycling calendar. An impressive record, unprecedented until now for a single country, and a true challenge to replicate. But what will happen in 2019? Ecuadorian rider Richard Carapaz and Colombian rider Egan Bernal have wiped the British slate clean and have set the podiums of Verona and Paris to the Latin-American rhythm, as they wait for Madrid to crown the winner of La Vuelta 19 (74th edition, which will be held from the 24th of August to the 15th of September).
Back in his hometown of Zipaquirá to celebrate this historical triumph, Bernal will not be the first Colombian to win two Grand Tours in the same season, after becoming the first cafetero to ride through the Champs Elysées wearing yellow. But his countrymen are firm candidates for the final victory after three weeks and almost 3300 km of competition. After two and a half months of not competing since the Giro, Richard Carapaz, whose personal history is split between Ecuador and Colombia, showed signs of strong form in the Vuelta a Burgos (3rd) before heading down to the Costa Blanca for the start of La Vuelta 19, departing from Salinas de Torrevieja.
Heading the Movistar team, Carapaz could become the fourth rider in history to win both the Giro and La Vuelta in the same season; the first since Alberto Contador in 2008. The Ecuadorian participated in his first grand tour in La Vuelta 17 (he came 36th) and, following his surprising and unexpected victory in the Giro 2019, is now a favourite to win La Vuelta. His triumph in Italy showed his capacity for making the most of the opportunities that present themselves in any type of terrain, bringing out the Movistar team’s best strategic side, and he now returns to La Vuelta better-prepared.
The team from Navarre, that will depend on the veteran rider from Murcia, Alejandro Valverde, also has the last Latin La Vuelta winner in its ranks: Nairo Quintana, crowned in Madrid in 2016. Even though Bernal snatched his sueño amarillo from him, the ‘Cóndor de Tunja’ continues to be the pioneer who paved the way for a new generation of riders who wish to fulfil the dreams of Lucho Herrera and Fabio Parra. In the last Tour de France, Quintana showed his strength and pride by obtaining an undisputable stage victory alone after climbing the Col du Galibier.

In Paris, Quintana admitted the “pride” he felt watching Bernal wear the yellow jersey for Colombia. He also pointed out how hard it is for Latin American riders to compete beyond the Atlantic Ocean and head to Europe. In his case, he proved it by winning La Vuelta (2016), the Giro (2014) and by being the only Latin American rider to make it to podium in all three Grand Tours. Within his hands (and his legs) remains the possibility of writing a new page in La Vuelta’s history and in his continent’s victory tally before leaving the Movistar team, which sponsored him in his European beginnings back in 2012.
Three weeks separate the birth of Quintana from that of Esteban Chaves, who leaves behind the physical misery of his recent seasons in order to defend the ambitions of Mitchelton-Scott. The Australian team hopes that the smiley Colombian succeeds his colleague Simon Yates on the final Spanish podium. Absent from the last edition of La Vuelta, Chavito accompanied Quintana on the Madrid podium in 2016 (3rd), a year after obtaining his first stage victories in a Grand Tour, on the summits of Caminito del Rey and the Cazorla Mountain Range.

Among the veterans of Colombian cycling, Rigoberto Urán (EF Education First) participates in his sixth La Vuelta at just 32 years of age. The Spanish grand tour has been a constant frustration for Rigo (Warren Barguil beat him to the finish-line by just millimetres on the 16th stage of La Vuelta 13, as determined by the photo-finish). Last year, the experienced Colombian proved to be in better shape by placing 7th in the general classification and showed amazing regularity in the mountains, as well as admirable legs during the final week (he finished 4th and 5th in the two last mountain stages held in Andorra).

In the ranks of the American team, will be two young Colombian talents: Daniel Martínez, who missed the Tour due to an unfortunate fall during training in the month of June, and Sergio Higuita, who joined the ranks of the Euskadi Foundation this season but took the leap into the World Tour category in May. Since then, he has accumulated a 2nd prize in the Amgen Tour of California and a 4th place in the Tour of Poland, his two only races with the EF Education First Team. For his first Grand Tour, Higuita will try to avoid the traps that ended the opportunities of Miguel Ángel López during the first week of La Vuelta 16. The Colombian climber discovered three-week races and suffered several falls at the start of the competition. Since then, his progress has been incredible: 8th with two stage victories in 2017 and 3rd in La Vuelta 18. “This third place was the least we could have hoped for”, he declared at the time.

The old continent will present another ex La Vuelta winner, Italian Fabio Aru. The Jumbo-Visma team brings together leaders of the Giro and the Tour: Primoz Roglic (3rd in Italy), who may become the first Slovenian to win a Grand Tour and Steven Kruijswijk, who hopes to improve his 3rd place in the Tour’s general classification and thus celebrate the 40th anniversary of Joop Zoetemelk’s La Vuelta victory (1979), as well as Jan Janssen’s victory (1967) – the two only Dutch triumphs in the history of La Vuelta. But before that, they will have to face the Latin American army that seems to have taken over the reins of this year’s Grand Tours.