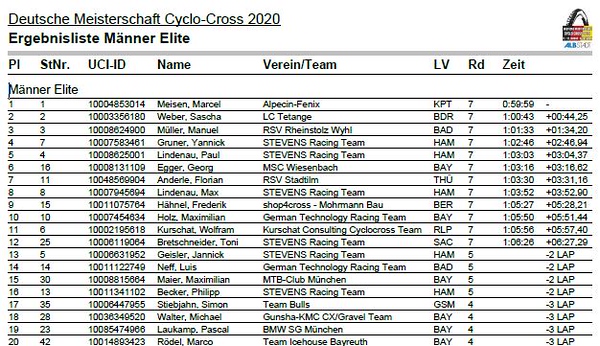 Spratt outfoxed surprise medallist Justine Barrow (Roxsolt Attaquer) on the home straight after the pair figured in the lead group for nearly the entirety of the race. Spratt’s teammate Grace Brown (Mitchelton-Scott) took bronze.
“This is just as special if not more special (than my first one), I owe this one to my team, they rode incredibly well,” said Spratt, 32, who added to her 2012 and 2016 victories.

The final day of the 2020 Federation University Road National Championships began with 78 riders setting out on the 104-kilometre race which took in nine laps of the infamous 11-kilometre Mt Buninyong course.
A crash on the opening lap brought down a group of riders including the highly favoured Tiffany Cromwell (Canyon SRAM Racing) and Lauren Kitchen (FDJ-Nouvelle Aquitaine). The group quickly fell more than two minutes off the peloton, effectively ending their day.
Mitchelton-Scott set the pace early at the front of the race before Brown launched a surprise attack on the third climb of the day which was answered by Spratt, with Barrow pouncing on the opportunity.
“We wanted to have a surprise tactic, normally everyone is waiting, waiting, so we thought why not turn it on its head and go on the third lap,” said Spratt. “We had Gracie Elvin riding really hard from the start and then Grace Brown launched an attack third time up the climb.
“When Justine came across, we were expecting more people but we thought ok, and knew we would have to go hard up the climb.”
Powered by Grace Brown, the trio quickly moved to a lead of nearly one minute on the peloton, before extending that gap to over two and a half minutes at the halfway point of the race. With a disorganised chase group heading a splintering field, the trio’s lead blew out to nearly six minutes by race end before Spratt held off Barrow in a sprint to the line, with Brown eleven seconds back.
“It was a dream race. It was a bit unusual I came in as the sole leader, but we had a solid plan and grateful for the team backing me and gold I could pull it off,” Spratt explained. “I owe a lot to Grace Brown, she annihilated herself for me so it was really pleasing to see Grace on the podium.
“Justine Barrow was very impressive, I tried to attack on the climb and I couldn’t get away from her. I felt confident if it came down to a sprint, but I think she had an incredible ride so I was very impressed, especially when she was matching me on the climb.”
It continues the career-best form from Spratt, who last September became the first Australian woman to win two career World Championship road race medals after winning bronze at the 2019 World Championships.
“I was so emotional over the line,” the Blue Mountains cyclist said.“I put so much work in and I did feel a lot of pressure today, so it’s also that pressure and that build-up of energy.
“I felt more nervous than I have in a while this morning. You just now you really, really, really want it, so just as special. It doesn’t get boring, put it that way.”
@Cycling Australia

Cameron Meyer (Mitchelton-Scott) finally won the elite men’s road race title at the 2020 Australian Road Championships in Buninyong, Victoria, on Sunday afternoon, having gone so close so many times before.

The Western Australian attacked just ahead of the final climb, shedding his rivals and soloing to an emotional victory, coming home almost a minute ahead of teammate Lucas Hamilton, with Marcus Culey (Team Sapura Cycling) – who’d spent much of the day at the front of the race in the main breakaway – taking the bronze medal ahead of WorldTour riders including Jay McCarthy (Bora-Hansgrohe), Nathan Haas (Cofidis) and Chris Harper (Jumbo-Visma).
@cyclingnews