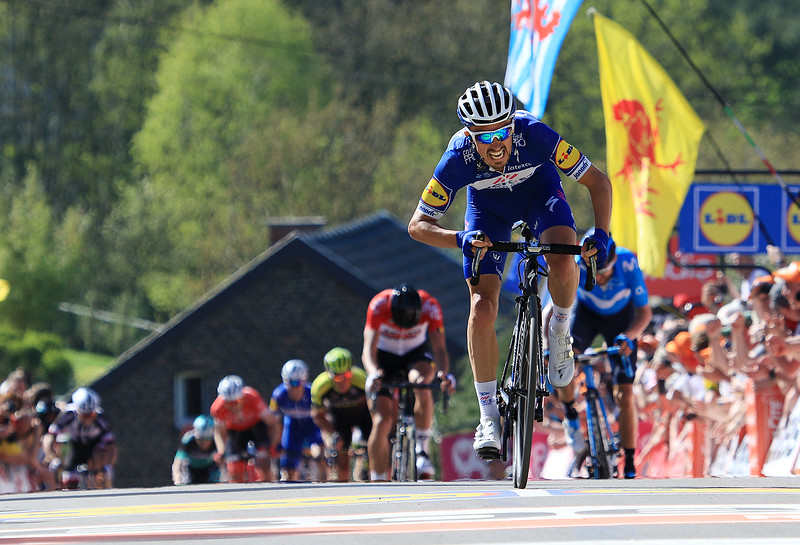 Key points:
 Alejandro Valverde and Julian Alaphilippe have won the Flèche Wallonne eight times between them and remain undefeated on the Mur de Huy since 2014. „Bala“ and „Alaf“ meet for the last time on the Ardennes Classics, as the former Spanish world champion has decided to retire at the end of the 2022 season.
 The two Flèche Wallonne experts will face stiff competition on Wednesday, April 20th on the final metres of the 86th edition. Tadej Pogacar has made the Ardennes campaign his last races before immersing himself in the preparation of the Tour de France while the Ineos Grenadiers team will be in force behind Thomas Pidcock.

 As for French concerns, recent races have seen riders like Benoit Cosnefroy and Valentin Madouas rise to the level of the best, just like Warren Barguil who already performed well in Huy.
It has been six years since the up-and-coming rider Julian Alaphilippe was only spotted by the most experienced of observers and came close to a major exploit the day he discovered the Mur de Huy.

In 2015, the newcomer finished runner-up to the master, Alejandro Valverde, who won the third of his five victories at the top of the Chemin des Chapelles. Since then, the two kept improving and sharing the Flèche Wallonne spoils, except in 2020 when Marc Hirschi took top honours, on a Wednesday in September when neither the Spaniard nor the Frenchman participated! Last year, after a breath-taking final, „Alaf“ won for the third time, while „Bala“ finished 3rd, for his eighth podium result on the Flèche Wallonne. Time goes by, but for their last duel in the Flèche, the „Balaf“ duo is still at the top of the bill. The champion from Murcia doesn’t want his final season to be a farewell tour. Even though his season hasn’t, so far, been the most flattering of his career, Valverde already has three victories in 2022 to his credit and a runner-up result in the Strade Bianche, which wouldn’t be realistic for an ageing pre-retiree. The world champion has already won a stage on the Tour of the Basque Country and rarely makes miscues when preparing for his races. The two Flèche Wallonne specialists should still be able to break late in the race.

However, Valverde and Alaphilippe’s hold on the Flèche Wallonne is not guaranteed. As in most cycling circles, the Slovenian camp’s rise to power could also involve conquering the Ardennes. If Primoz Roglic, 2nd in 2021, will not come to the Flèche Wallonne this year, Tadej Pogacar should not have any qualms after his victory in Liège last year. His near-absolute domination in 2022 on the Italian roads (Strade Bianche, Tirreno-Adriatico), leaves little doubt about his ability to excel if he takes the measure of the tricky last kilometre. Many riders want to mix it up with the Slovenian ogre and the established leaders in the big puncher’s race. Ineos Grenadiers has a near-complete team of contenders: Thomas Pidcock took an encouraging 6th place in his first go in 2021, Michal Kwiatkowski just won the Amstel Gold Race for the second time and finished third in 2014, Dani Martinez recently won the Tour of the Basque Country, and Carlos Rodriguez won a stage at the age of 21 and is an expected future Spanish champion. The French delegation could also create a stir, considering the recent results of Valentin Madouas (3rd in Flanders) and Benoit Cosnefroy (2nd in the Amstel Gold Race). Warren Barguil, who picked up a stage on the Tirreno-Adriatico, and won the Grand Prix Miguel Indurain, has four top-ten finishes in the Flèche Wallonne (4th in 2020). It will be a complete field at the bottom of the Mur de Huy.