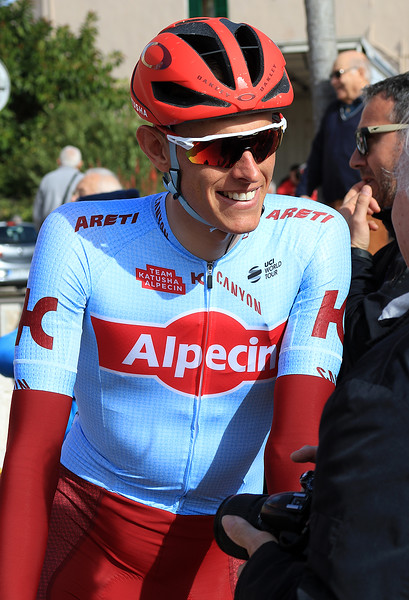 Nils Politt showed pure determination and solid resolve in his race of the 117th Paris-Roubaix on Sunday, taking second place on the boards of the velodrome in Roubaix with a time of 5:58:02 to match that of winner Philippe Gilbert (Deceuninck-Quick Step). In a straight up sprint to the finish line, Gilbert dove down to the inside of the track to take the win after almost six hours of racing in France. It was a spectacular result from Politt, 25, moving up from seventh place last year to stand on the 2019 podium in his second participation in the cycling monument.
Nils Politt: “So close, but even second in Roubaix at my age I still can’t believe it. I was feeling good from the first moment I woke up this morning. For the whole race the team did a great, great job and I think we’ve had such a good classics season. It’s unbelievable to me to get second in Roubaix.” Politt placed fifth in last week’s Tour of Flanders.
Team Director Dirk Demol, winner of 1988 Paris-Roubaix, expressed his excitement for Nils and Team KATUSHA ALPECIN after the race: “Second place in my favorite race! We were in the game the whole day. The team did a good race and a smart race. In the past weeks we’ve seen that Nils was growing toward his top form and this was the race for him we’ve been aiming for these past few months. He really didn’t make mistakes. He’s going to win some day. He has the capabilities. He is born for this type of race. The confidence he takes away from getting second in this race will have him coming back for more.”
It was a brilliant performance from Team KATUSHA ALPECIN with aggressive riding all day long. Alongside Deceuninck, KATUSHA ALPECIN were the strongest team during the race with Nils and teammate Marco Haller in the front group when the peloton splits happened after the first pavés. Haller pulled, as did Mads Würtz Schmidt while Politt took stock of his race surroundings and who was strongest in the field.
The 257k course from Compiègne to Roubaix featured 29 sectors and 54.5km of cobbles and was fast from the outset. Politt was attentive throughout, putting himself in an early breakaway group before the cobbles, and then later reading the intentions of the eventual winner with just over 60k still to go.
Politt: “I saw in the feed zone that Gilbert wanted to go, so I went with him. With Peter Sagan and his group coming back to us, I didn’t have to go so deep. At the end it was a little bit of bad luck for me that Gilbert’s teammate was coming back to us on the velodrome. Gilbert was willing to gamble a bit. But I still have some years and I hope I can one day win this race.” Rounding out the podium was Gilbert teammate Yves Lampaert at 13-seconds.
Teammate Marco Haller rode in service of Politt today, earning himself a fine 16th place finish, and expressed his great pride at the success of Nils: “The team just finished on the podium in a monument. I am so happy and proud to have been part of it. It was six hours of stress and fighting. It feels like a win, absolutely. We told Nils last night at dinner that this might be the last time he could fly under the radar, so we told him he’d better go out and take it. I think he did that. He rode such a perfect race. He’s a brilliant bike racer.”