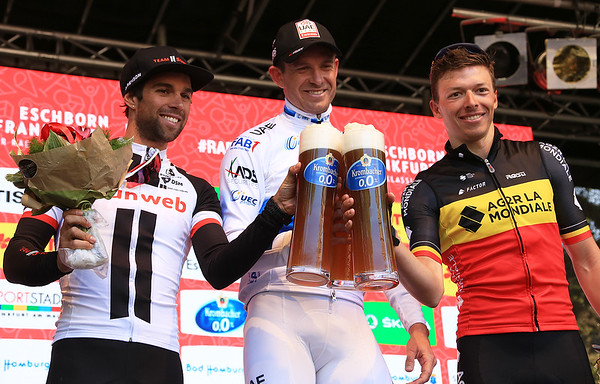 Alexander Kristoff und Oliver Naesen 2 heiße Favoriten für Paris-Roubaix am Podium bei Eschborn-FRA 2018.
Foto: Gerhard Plomitzer
Oliver Naesen is ceasing to be a dark horse and becoming a full-fledged favourite. After finishing second to Julian Alaphilippe in Milan–San Remo, Oliver Naesen has put on a good showing in the cobbled classics, coming third in Gent–Wevelgem and overcoming a bout of bronchitis to finish seventh in last Sunday’s Tour of Flanders. Buoyed by the prospect of a race more open than in previous years, the AG2R La Mondiale leader is heading into his fifth Paris–Roubaix full of ambition and confidence.

Have you managed to get rid of your bronchitis?
I feel much better now, my bronchi aren’t bothering me any more. I’m almost at 100% and, at any rate, it won’t be a problem for Roubaix, it’s not going to hold me back.
Looking back a few days ago, how would you rate your performance in the Tour of Flanders?
Last Sunday, I did what I could with what I had. I got a decent placing despite not being at my best. I have good reason to be happy considering the circumstances.
In 2018, you fell short of your potential with a finish in 12th place. What happened?
Last year, I was at the back with the cars all day long! I didn’t even catch a glimpse of the lead group. In general, my performances in Paris–Roubaix have been quite disappointing. However, things might be changing this year. I’d rather not get ahead of myself because everything could go completely pear-shaped again on Sunday.
How do you think you have improved since last year?
I reckon I’ve got better in every respect since last year. I’m still quite young, so I’ve matured physically and begun to reach my prime. Experience has also sharpened my tactical acumen. For example, I shouldn’t bet the farm on a sprint finish. As for confidence, it’s hard not to feel confident when I’m riding at this level.
„It’s not now or never. I’ve still got plenty of seasons ahead of me to win races“
After trouncing the opposition in previous years, Sagan and Van Avermaet seem to have come back down to earth. Do you expect a more open race?
I still see them as the two favourites. At any rate, it would be foolish to rule them out. Let’s not forget that Sagan is a three-time world champion and the winner of last year’s race, while Greg is an Olympic champion. However, it’s true that there are a lot of riders at a similar level. This could make it an even more tactical race.
Do you think this could be the year you win the major classic that is still missing from your collection?
Perhaps, but it’s not now or never. I’m still learning and getting stronger. I’m confident that I’ve still got plenty of seasons ahead of me to win races. However, it’s true that it’s never too early to keep an eye on all the young riders who are getting better or even at the same level.
Do you agree that you will enjoy the support of the best AG2R team that you have ever had on the cobblestones?
Yes, I do. Stijn Vandenbergh is as strong as he was before his crash in the Four Days of Dunkirk in 2017. Sylvan Dillier, who was second in the velodrome last year, has got even better since then. I think Paris–Roubaix is better suited to our strengths than the other cobbled classics. Teammates struggle on the climbs, whereas Paris–Roubaix is more conducive to team dynamics. Also, my teammates ended up strewn all over the place in every cobbled sector when we reconnoitred the course last year, whereas this time round I’m the one who’s suffering!

Would you rather have a wet race or a dry one?
Anyone who hopes for rain is out of his mind! Only the spectators enjoy it.