THE 77TH EDITION OF LA VUELTA WILL TAKE PLACE FROM THE 19TH OF AUGUST TO THE 11TH OF SEPTEMBER 2022, WITH AN OFFICIAL DEPARTURE FROM THE NETHERLANDS

La Vuelta 22 will take off on the 19th of August with a team time trial through the streets of the Dutch city of Utrecht. The second stage will be held on the 20th of August between ‘s-Hertogenbosch and Utrecht. On Sunday the 21st of August, the peloton will continue to ride through the North Brabant Region in a circuit stage, both commencing and concluding at Breda. The team presentation will take place on Thursday the 18th of August in the centre of Utrecht. This act will inaugurate Holland’s official La Vuelta departure.

La Vuelta 22 will pass through 34 Dutch municipalities over three stages. The local organising committee, led by the cities of Utrecht, Breda and ‘s-Hertogenbosch and the provinces of Utrecht and North Brabant, is made up of a group of public institutions led by Sharon Dijksma, Mayor of Utrecht. “We have finally an official date. We were looking forward to get back on track with La Vuelta Holanda’s project and now we can’t wait to get back to work. We’re putting together a wonderful program for residents and businesses as well as for all our international guests. Our aim is to further reinforce the special link that already exists between Spain and the Netherlands”.

This vision is shared by Javier Guillén, General Manager of La Vuelta: “We’re establishing new dates for a project with almost 6 years of work behind it. These extra months of waiting haven’t reduced one bit our eagerness to work together, nor the enthusiasm and ambition we have put into organising this official departure from the very first day. This departure will go down in history, marking an important milestone for both Spanish and Dutch cycling.”.

The activity program connected with the official departure of La Vuelta from Holland will commence much earlier. The events that have been designed to entertain the regions and cities visited by the race will begin several months before it takes off, making the La Vuelta Holanda project a concept that goes far beyond just the three days during which it will host the stages. The organising committee has woven a contact network featuring sports clubs, schools, cultural institutions and local entrepreneurs in order to build a vast idea and activity program revolving around cycling, a healthy urban lifestyle and sustainability.
The official departure of La Vuelta from Holland also coincides with a very special occasion for the city of Utrecht, which celebrates 900 years since it was officially recognised as a city. 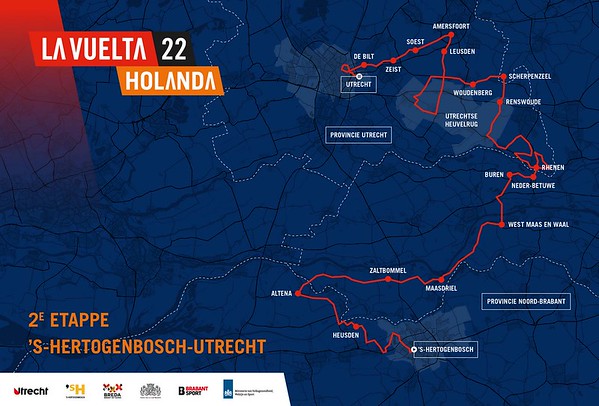 Holland will once again embark on the journey towards fulfilling its great project – to host the official departure of La Vuelta 22. The Dutch city and province of Utrecht and its neighbouring North Brabant will be the protagonists of the start of La Vuelta’s 77th edition. The Netherlands were already prepared to host the first three stages of the 2020 edition but the COVID-19 health crisis forced the organisation to cancel any stages held outside Spanish territory.
The preparations that were in place for the 75th edition of the Spanish tour will, therefore, be carried out in the 77th. Utrecht will be the star of the team presentation, the initial time trial and the finish-line for the second stage, that will begin in ‘s-Hertogenbosch, capital of the Province of North Brabant. The third stage will cover said province with the departure and finish-line both located in the city of Breda.

A NEW OFFICIAL DEPARTURE FROM THE NETHERLANDS, 13 YEARS LATER

The Dutch municipalities of Breda, ‘s-Hertogenbosch and Utrecht, as well as the province of the same name and neighbouring North Brabant, are thrilled to take up this project again. La Vuelta thus celebrates an official departure from The Netherlands again, thirteen years after the last time the race’s peloton passed through Dutch territory.
The Director of La Vuelta, Javier Guillén, expressed his enthusiasm for the official departure of La Vuelta 22. “To return to The Netherlands, which is the quintessential cycling nation, is something we’ve been wanting to do for a very long time. Holland is a guarantee for success in terms of organisation and I have no doubt that, despite the complexity of the current situation, we will be able to carry out the event safely and successfully”. “In 2020 we were forced to make a decision that we never wanted to make, but which we were compelled to make given the circumstances. Despite everything, the Netherlands’ commitment and wish to host La Vuelta hasn’t changed a bit since then. It’s a pleasure for us to work with institutions that are so committed and that love cycling as much as they do”, he explained.
The 2022 edition will be the second edition of La Vuelta to take off from The Netherlands, after Assen 2009, and the fourth to take off from abroad, after Lisbon 1987, Assen 2009 and Nîmes 2017. The city of Utrecht will act as the local coordinator. Both Utrecht and the Province of North Brabant have vast experience hosting large sporting events in general, and cycling events in particular.

The official departure of La Vuelta 22 is even more special, if that’s possible, due to the close historical links between Spain and The Netherlands, and the current common projection they both have in terms of environmental protection and sustainability policies. Both of these criteria are, undoubtedly, decisive when it comes to organising the official departure in Holland.

A COMMON PROJECT
The official departure of La Vuelta 22 is the fruit of an intense and continuous process carried out by all the relevant institutions. Besides guaranteeing the reception and organisation of an elite sporting event, such as the launch of the Spanish tour’s 77th edition, the organising committee of ‘La Vuelta Holanda’ and all its partners work together to create an extensive festive and sports activity program that will surround the peloton of La Vuelta 22 in its official departure from The Netherlands.
The five municipalities and provincial institutions involved have joined forces to fulfil this project and will continue to work together in order to bring it to life. The private sector will also be closely linked to the event’s financing and will formally request a state subsidy from the Dutch Government’s Ministry of Health, Wellbeing and Sports.