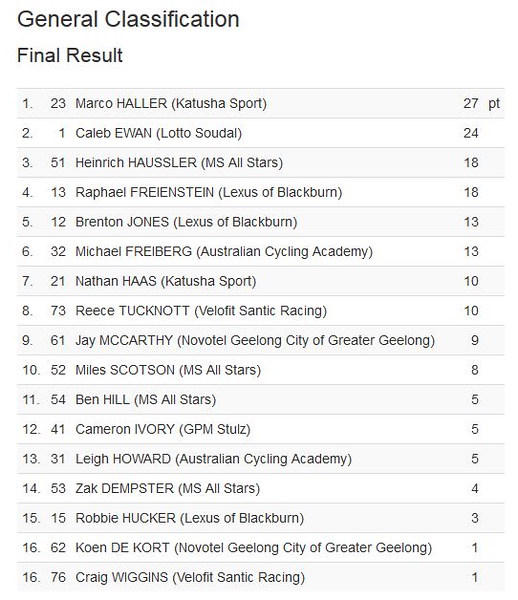 01.01.2019
Marco Haller wins the opener of the Australian Bay Crits

Marco Haller started the season successfully. The 27-year-old Austrian rider won the first race of the Lexus of Blackburn Bay Crits on New Year’s Day in Geelong, Australia. Haller was the fastest rider after a sprint from a five-man squad. The German Raphael Freienstein was second, ahead of Miles Scotson (Groupama-FDJ).

„Everybody was pretty excited for the Bay Crits. Winning a race on January 1st is just a perfect start for the team and of course for myself,“ said Marco Haller.

Haller was joined by his teammates Alex Dowsett, Nathan Haas and two „national level“ riders. Tom Chapman from South Australia and Dylan McKenna of Victoria were the lucky winners of a competition launched by KATUSHA Sports in mid-December. The five-man special team raced in customized KATUSHA Sports kits in collaboration with Pushys.

„Nathan (Haas) already warned me that the Australian riders are pretty good in shape that time of the year where the Nationals and the Tour Down Under is just around the corner. It was a very tough race and it was unexpected that our five-man group made it to the finish. But the break was strong (Miles Scotson was sitting in there) and immediately we got some time to the bunch. In the end it was man against man and I’m happy I did it,“ added Haller.
For Marco, the victory is a boost after losing a large part of the season in 2018. In April he broke his kneecap in training in a collision with a car and was out for six month of racing.
The Bay Crits continues tomorrow in Geelong with another criterium on a 650m lap course.