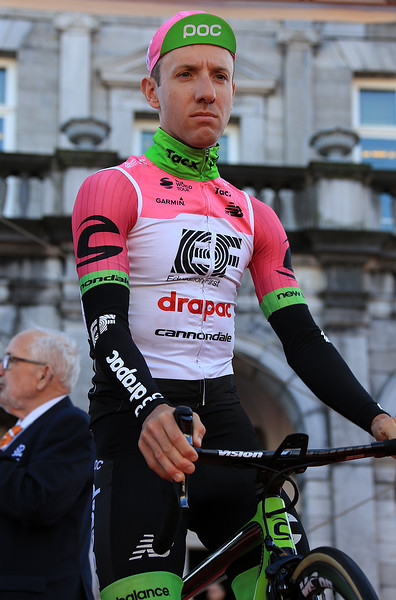 Mike Woods was working at a running-shoes store in Ottawa, Canada when he began to borrow his dad’s bike. He was one of the best runners in the country, but he’d injured himself by overtraining. And so he had some time on his hands. He needed to do something. Anything.
Riding, turns out, proved cathartic. And talent doesn’t just go away.
Friends convinced him to try his hand at bike racing, and Woods soon discovered an innate talent. Local race wins earned him a spot on Canada’s national team for Tour de Beauce. His performance at Canada’s oldest stage race garnered him a UCI continental team contract two years after he first picked up a bike.
Three years later, in 2016, Woods was pulling on argyle, making the leap up to the WorldTour.
EF Education First Pro Cycling is thrilled to announce Woods has signed a multi-year extension with the team.
“The direction of the team, the idea of exploring the world — it all really meshes with what I believe in,” said Woods. “I feel very fortunate to be on a team that values what I naturally value – education, exploration, community.
“Riders can be themselves on this team,” added Woods. “They can be individuals. They can speak their minds. It makes for a fun environment, an interesting environment. I have good friends on this team because of how Jonathan Vaughters has chosen to build the roster. It’s an interesting group of guys not just on the bike but off the bike as well. I could go on for ages about how great this team is, how great the guys are. I’m really happy here, and I’m super stoked to stay.”
Woods enjoyed a breakout season in 2018, finishing second at Liège-Bastogne-Liège, winning his first Grand Tour stage at the Vuelta a España and taking the bronze medal at the 2018 Road World Championships in Austria. 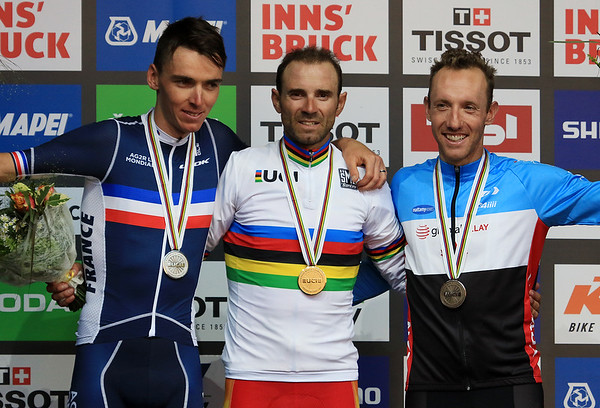 It was after that Vuelta stage that more people would come to understand both Woods’ talent and his story: Woods publicly dedicated that emotional victory to a stillborn son, Hunter, he and wife Elly had lost two months prior.
“There were so many people on side of the road today just screaming my name. My director Juanma [Garate] was on the radio and in the last 500m he said, do this for your family,” Woods said that day, tears welling up in his eyes. “I wanted to win so bad for him, and I did … I did.”

Woods was lovingly dubbed the “Rook” when he came onboard. He proved a quick study.
“I came to the team not knowing who I was as a cyclist and what I was capable of,” Woods said. “I didn’t fit the typical neo-pro role. I’m lucky to have had the directors and team managers believe in me.
“I had no experience in the WorldTour when I joined the team, but JV said I could win an Ardennes Classic,” added Woods. “Knowing what I know now, that was a bold prediction for him to make about me at the time. I had not shown anything that truly indicated I could win a Classic – but he was right. I haven’t won one yet, but with the results I got last year, these are races we know I can win.”
Standing on the top step of the podium at one of the Ardennes races is high among Woods’ future ambitions. He hopes to start the 2019 Tour de France, and he’s excited about the opportunities on offer at the 2020 Olympic Games in Tokyo.
“I really want to try to win some big races now,” said Woods. “I’m starting to figure out how to win in the WorldTour. That doesn’t mean I’m going to win every race, have success in every race. I know I will have some big failures […] but I’m much more consistent now. I have a better understanding of my fitness and can better predict how I will perform.”
Since joining the team in 2016, sport director Juanma Garate has worked closely with Woods.
“I have to laugh when you ask me about Mike’s future because I have said the same sentence to him over and over since his first month with the team,” said Garate. “I always repeat to him ‘You don’t know what your limit is.’ It was true then, and it’s still true now. He doesn’t know. We don’t know. He’s kind of a new rider with the maturity of a 31-year-old. He’s progressing all the time.“
A latecomer to professional cycling, Woods played hockey growing up before finding success in running. He set the Canadian junior record in the mile (3:57:48) and the 3km (7:58:55). Both records still stand today. Woods earned a track scholarship to the University of Michigan, competed for the Canadian national team and harbored ambitions of becoming one of the world’s best milers.
Running’s loss quickly became cycling’s gain.
“We had our eyes on Mike for a long time before we actually signed him. His talent was clear based on his running, but it’s a rare runner who can figure out the bike handling and nuance of bike racing,” said EF Education First CEO Jonathan Vaughters. “But at Tour of Utah in 2015, I felt he had a certain extra determination to get over those hurdles. He was a gut feeling signing. I’m so happy to see him progress so far.”
“Performance wise, the sky’s the limit for Mike,” Vaughters added. “That’s exciting for the team. But beyond that, he’s just a fantastic person to have on the team. Mike Woods is all heart. He gives all he’s got to his teammates. And I couldn’t be happier to have him on the team.”
Both the team and Woods are growing together.
“I’m really pleased with the progression of the team since I joined it,” said Woods. “I had a lot of fun the first year, but it’s nothing compared to the kind of fun I’m having now. As an organization, the team is far more organized, far more focused, far more clear in its goals. I’m really proud to be a part of this team, especially now with the partnership with EF.
“I’m hoping the team’s approach and my performances over the last year will inspire more kids to get on bikes and more fans to cheer for a Canadian kicking it in the WorldTour.”
Text: EF Education First
Fotos: Gerhard Plomitzer – www.plomi.smugmug.com

Villella is Vuelta King of the Mountain; Woods rides to seventh overall

The #GreenArgyle Vuelta a España squad closed out the final three-week Grand Tour with seventh overall and the polka dot King of the Mountains jersey.

Canadian Mike Woods rode what he described as “the best race of my life to date” to contend with the sport’s top general classification riders. En route to seventh overall, 8’27 down on 2017 Vuelta winner Chris Froom, Woods recorded four top ten stage results, including third place atop Cumbre del Sol.

“I think the biggest lesson learned here is that I’m able to ride with some of the best riders in the world,” said Woods. “Prior to this race, I thought I might have the legs. I was putting out numbers that showed I was capable of having a performance like this, but I didn’t yet have it between the ears. And now I do – and a lot of that has to do with the experience I’ve gained here and the good guidance the team has provided. I really found my mojo during this race.”

Woods arrived at the Vuelta harboring ambitions to win a stage. It was only after his performance during week one and his subsequent rise to eighth overall that the team fully committed to general classification ambitions.

END_OF_DOCUMENT_TOKEN_TO_BE_REPLACED

Liège-Bastogne-Liège. La Doyenne. The Old Lady. The third of the Monuments. The last Ardennes. The unofficial shift from one-day classics to stage racing.

Cannondale-Drapac hope to surprise in the 103rd running of the Belgian classic. The team of eight will back a single leader despite multiple cards to play.

“Over the last few weeks, we’ve seen the best guys appearing early,” said sport director Tom Southam. “If the best guys appear early here, I’m not worried about that. We’ll be there with the right guys. We have a lot of guys in good shape coming out Basque Country, coming out of Trentino, and we plan to back one of them. I don’t want to say any more than that.”

END_OF_DOCUMENT_TOKEN_TO_BE_REPLACED

Rolland to lead, Craddock and others seek opportunities

“We’ll be centering the team around Pierre Rolland, as this back-end loaded Tour de France uniquely suits his diesel-like qualities,“ Slipstream Sports CEO Jonathan Vaughters said. „He may not be the most explosive rider, but come the last few days of the Tour de France, he will surprise a few folks. We’ll also be helping Lawson Craddock realize his potential in his first Tour, and looking for opportunities to animate the race. We go into this race as a hungry mongrel of a team. But I’ll take that over a poncy, over-fed poodle any day.“

The Tour team is versatile, and capable of stage hunting as well as protecting Rolland. Navardauskas is a past stage winner, and Rolland has won two himself.