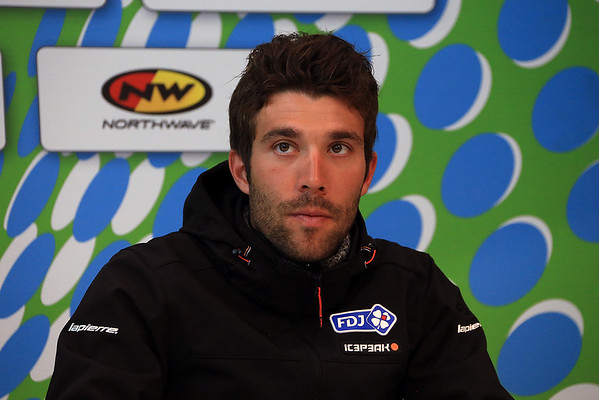 Sep Vanmarcke won a small group sprint in Mandelieu-la-Napoul, France on Friday. The Belgian benefited from an adaptable team prepared to react to any scenario on the opening stage of Tour de Haut Var. With the stage win came the yellow race leader’s jersey.
“I’m really happy to win,” said Vanmarcke. “It’s my first win in nearly three years. It feels so good to be back on the top step.”
Groupama-FDJ showed their cards early, taking control of the pace-setting in the peloton behind the three-rider breakaway. The 154-kilometer stage offered up undulating terrain, and EF Education First Pro Cycling Team had discussed several different plans to approach the tricky route.
“There was a false flat part with 30-kilometers to go,” said sport director Ken Vanmarcke, Sep’s older brother. “If the gap to the breakaway was small, we wanted to anticipate action with Sep and Matti [Breschel]. The gap wasn’t small enough to do anything then, but on the second to last climb, the gap was down to 40-seconds and Lachlan [Morton] tried to go across. The climb was too short for that.”
With initial efforts thwarted, EF Education First regrouped ahead of the last climb.
“Normally the final would be hard for me with a five kilometer climb,” said Sep. “But I felt really good all day, and I wanted to give it a try.”
Only 20 riders remained in contention over the top, Vanmarcke and Hugh Carthy among them. Crashes and splits on the technical descent further reduced the group. Fourteen riders hit the four-kilometer flat run-in to the line.
“Hugh knew Sep had a big chance to win the sprint, and immediately started riding in the front of the group to keep the pace high,” said Ken.
“He pulled into the last corner,” Sep added. “I could focus on the sprint. My timing was good. I made it a long sprint and could hold on to take the win.”
The younger Vanmarcke brother is EF Education First’s Classics captain.
“I think we see that Sep is on a really good path for the Classics,” said team CEO Jonathan Vaughters. “I don’t want to overstate anything because of course the Tour of Haut Var and the Tour of Flanders are completely different things, but he’s obviously in a good place.”
“A lot of the things we’ve been working on for two or three years now are coming to fruition. There’s no magic thing that just started happening. We have the same directors, and a lot of the same riders. It’s just that little by little we’re able to build on things,” said Vaughters. “The serenity of having EF’s support allows us to better execute and plan for the future. Everyone isn’t worried about where their next paycheck is coming from; they’re looking at how to win the race. And that’s showing.”
The Tour du Haut Var continues on Saturday with a hilly 200-kilometer day between Le Cannent-des-Maures and Mons.
“We will enjoy the jersey, but we have to be realistic,” said Ken. “Sep won’t have the jersey on Sunday evening. We will try to keep it on the team but on different shoulders.”
“Tomorrow will be another hard day, and on Sunday the final is on a longer climb,” said Sep. “I want to give something back to Hugh. He’s our strongest climber here, and I suspect well work for him this weekend.”
“As always, Sep worked this winter,” said Ken. “He’s on the right track towards the Classics.”
The Haut Var victory is the team’s fifth win in the still young season. Last year, the team recorded six victories in total.
@EF