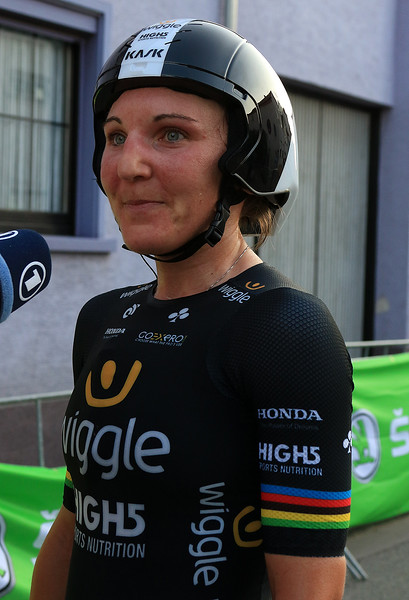 Aware of the magnitude of the occasion, the riders in the women’s peloton are gearing up for the first edition of Paris-Roubaix Femmes, scheduled for Saturday 2 October, after their debut on the cobblestones of northern France was frustrated in October 2020 and again last spring. The world of cycling is awash with questions about the favourites to win the inaugural edition, wondering what it takes to shine in this race and whether the decisive attributes are exactly the same as in the men’s competition. Five of these favourites, particularly excited about this momentous event, tell us more about their relationship with the Queen of Classics as the countdown to their initiation on the cobblestones ticks away. The powerful Lisa Brennauer hails from Bavaria, like her friend John Degenkolb (winner of Paris-Roubaix in 2015) and the trailblazer Josef Fischer, first winner of the Hell of the North, in 1896. She can only dream of making history!

A DREAM IS BORN
Paris-Roubaix is coming, and Lisa Brennauer can already feel “goosebumps” as she thinks of “riding the last cobbles in Roubaix, the ‘nice’ ones, and going into the entrance of the velodrome. Iconic is really a word that fits this race well.” The passionate German champion is already familiar with the Hell of the North and its folklore: “It’s a brutal race that we’ve all followed many many times on television, and now we finally can take on this challenge ourselves. So I think it’s a cool step for women’s cycling and I’m excited to be part of it. I like the style of the race. I think it’s also something that suits me as a rider. So I’m extra motivated for this first edition.”

CUT OUT FOR THE COBBLESTONES?
There are many requirements to do well on the cobbles, especially on the way to Roubaix. “You need a lot of power, first of all, and of course you need to be able to ride over the cobbles”, Brennauer begins with. “But I also think you need a team, and you need to have the ability to never give up.” The German rider relies on her teammates to put her in the best position to show her abilities, and she notably counts on Maria Giulia Confalonieri: “She has been riding super well in last week’s World Championships.” Brennauer’s stellar TT record shows she has the power and resilience. With several podium finishes in cobble classics such as the Ronde van Vlaanderen and Gent-Wevelgem, she’s already proved her abilities perfectly fit hard racing in difficult conditions: “I really think it’s a race that suits me.”

PREPARING FOR THE BIG SHAKE
Straight off the world championships, Brennauer went to Roubaix for another recon of the cobbles. “I came pretty early, already last year when we were allowed to travel again. We had perfect Roubaix weather then – it rained”, she describes with a laugh. “I had two days there to ride on the circuit, test the equipment, and I had another two days after the Worlds. I think I know the good way to go, the lines to choose or, at least, the ones not to, to try and make it over the cobbles as smooth as possible.” Hailing from Bavaria, Brennauer has also spoken with John Degenkolb, winner of the 2015 Paris-Roubaix: “We’ve known each other from races since we’re under 15, so his victory is my favourite Roubaix moment. His main advice was to always be in the front and to never give up until you really are at the finish, because everything can happen in this race.”

THE IDEAL SCENARIO
“I think a lot of people see me as a rider who often waits for the finish because I’m quite fast, but I don’t think this is how you will win Roubaix in the end”, Brennauer warns. “Of course, it would be best to arrive alone, or in a very very small breakaway group to be able to win this race, and, yes, it’s a scenario I hope I will be able to create.” To do so, she aims to “save as much energy as possible in this first part of the race, to then be able to be in an attack or launch an attack in the finale. This is where I see myself.” It could lead her to a second victory on French roads, 8 years after she took her first pro win during the Tour Languedoc Roussillon. Raising her arms in Roubaix this Saturday would make for a major landmark in her career and in cycling history.