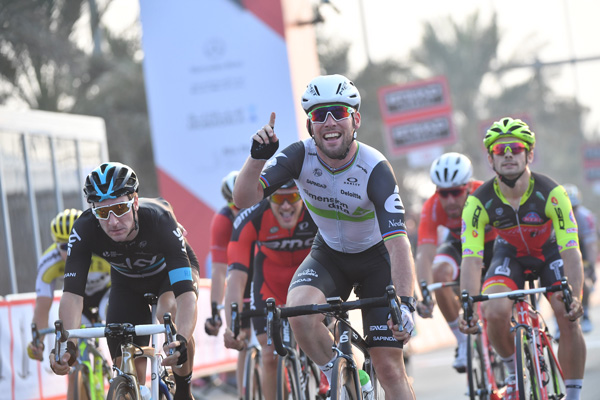 Speaking seconds after the stage finish, the winner Mark Cavendish said: „I’m happy with that. We wanted to win today. I felt good. It was a very chaotic sprint in which I lost my lead out in the second last corner. I thought ‚that’s it‘, but we got back on. I followed Giant. I didn’t want to go down, I had to brake at some stage. I was happy to be behind Sky in the last corner and pass them. It was incredible to pass through all the iconic sites of Abu Dhabi. It was impressive to see the buildings, the Grande Mosque, and the towers, and to finish in Al Marina“.

TOMORROW’S STAGE: Stage 3 – STRATA STAGE / AL AIN – JEBEL HAFEET (150KM)
The third stage comprises both urban surroundings and mountains. The first part, inside Al Ain city, is all on wide roads with roundabouts and speed humps and is followed by a second part in the desert along wide and predominantly straight roads. At 15km to go, the route starts to rise slightly towards the final ascent, culminating in an uphill finish at an altitude of 1025m, following an 11km climb featuring slopes with an 11% gradient.

Last km
The final climb is on wide-ranging bends on a three-lane roadway. The gradient is mostly around 8-9% with a peak of 11% at 3km to go. There are short descents in the last kilometres before the final ramp with a straight finish on asphalt.

Abu Dhabi Tour Media Kit
From the official online pressroom the media can download high resolution pictures of the 2016 race, the various press conferences, the opening ceremony and the UCI Cycling Gala. In order to download the pictures, just go to http://pressroom.rcssport.it/ (username: press / password: press), select “Scarica contenuti/Download contents” on the top right, choose “2016” from the menu on the left, then “Ciclismo”, and then “Abu Dhabi Tour”. The photos are free of charge for editorial use, as long as both the Abu Dhabi Tour and the photographer’s name is quoted. 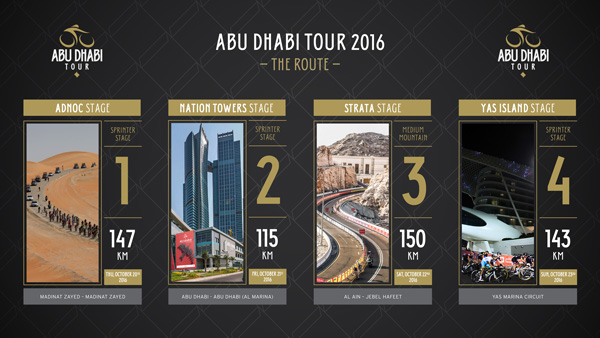