• La Vuelta 20 will take off from the Basque Country with the stage Irun – Arrate. Eibar – and will end up in Madrid.
• Following the cancellation of La Vuelta 20’s official departure, originally going to be held in the Netherlands, Unipublic has decided not to replace the first three stages, and has consequently informed the UCI and the RFEC (Royal Federation of Spanish Cycling) in the aim that the cycling regulatory body would be able to reorganise the calendar with a Vuelta consisting of 20 days, instead of the original 23.
• With this new configuration, the 75th edition of La Vuelta will be a historical one. 18 stages in total: the first one in the Basque Country, almost five decades later.

The La Vuelta organisation, in accordance with the UCI (International Cycling Union), agreed to delay the race’s 75th edition. La Vuelta 20 was originally going to take place from the 14th of August to the 6th of September, departing from the Netherlands. However, the necessary reorganisation of the annual cycling calendar, due to the global health crisis caused by COVID-19, has forced these plans to change. In the end, La Vuelta 20 – whose new dates haven’t been determinate by the UCI yet – will consist of 18 stages and will take off from the Basque Country.

Following the official cancelation of La Vuelta 20’s official departure from the Netherlands, Unipublic, as the race organiser, has decided not to replace the three first stages – which were going to travel through the Dutch regions of Utrecht and North Brabant – and instead begin the Spanish tour with the Irun – Arrate. Eibar stage. This is what has been communicated to the UCI in the aim that the cycling regulatory body could be able to reorganise the calendar with a Vuelta consisting of 20 days, instead of the original 23.
This decision has been motivated by the exceptional situation brought about by the health crisis currently affecting every industry, including sports. “Obviously, when you design the race, you hope to never have to make changes of this magnitude, but we have to be sensible with the current situation and we have to accept that it is very difficult to replace an official departure at this late stage, given all the institutional and logistic planning that it involves”, stated Javier Guillén, Director of La Vuelta.

A HISTORICAL EDITION
With its new configuration, La Vuelta’s 75th edition will be a historical race in many aspects. It will be the first time in the past 35 years that it consists of fewer than 21 stages. The last time this happened was in 1985, with an edition featuring 19 stages. It will also be the first time since Unipublic took over control of the race in 1979 that La Vuelta will take off from the Basque Country. It has been almost five decades since Euskadi last hosted the race’s official departure. In 1961, La Vuelta took off from San Sebastián, with a team time trial featuring both the starting-line and finish-line in the city.
“To have that passion for cycling that is so present in the Basque Country from the very first day makes this change in plans much more pleasant”, added Guillén. “In any case, we only hope that this unprecedented health crisis is resolved soon, that we can all return to normal, including La Vuelta – that will again consist of its traditional format and duration of 21 stages and two rest days in 2021”, he concluded.
More information about La Vuelta : www.lavuelta.com
@Unipublic/ASO

La Vuelta 20 will not take off from the Netherlands. Due to the exceptional situation caused by the COVID-19 crisis, the organising committee of La Vuelta Holanda has been forced to cancel the official departure of the race from the Dutch regions of Utrecht and North Brabant.
The local organisation committee and Unipublic have been forced to make this decision as a result of the reorganisation of the 2020 cycling calendar announced by the UCI (International Cycling Union) on the 15th of April and due to the measures that have recently been implemented by the Dutch government forbidding the celebration of sporting events until the 1st of September. All of this now places the celebration of La Vuelta after the Cycling World Championships and not during its original dates (14th of August – 6th of September).

Despite both parties’ wishes to try to maintain the official departure from Utrecht, it has not been possible to find a new date in which to hold said project, given the new constraints. “The departure of La Vuelta 20 from Holland was a project that had been designed as a big summer party. Faced with the impossibility of ensuring the planned development of the race’s official departure, with all of the required guarantees for an event of these characteristics, La Vuelta Holanda has preferred to request the official departure’s cancellation”, they have stated.

La Vuelta Holanda Director, Martijn van Hulsteijn: „It is clear that there is great disappointment in Utrecht, Breda, ’s-Hertogenbosch and the provinces of Utrecht and Noord-Brabant. We were ready to organize a fantastic event in the weekend of the 14th, 15th and 16th of August. Since we heard of the change in the UCI calendar, we have discussed with all parties to find out if the start in the autumn would be possible, but it turned out to be too difficult of an assignment. Moving three stages, on three days, through 34 municipalities with start and finish places in various places turned out to be a bridge too far. For example, we did not have all the needed infrastructures at our disposal. In addition, a lot of road works were carried out around the 34 participating municipalities in the autumn. The impact would be too great. Even if you leave the desirability and uncertainty in Corona time out of the discussion“.

Jan van Zanen, mayor of Utrecht, on behalf of the three cities and two provinces involved in the organization of the official start: „We were all looking forward to celebrate a Spanish fiesta in all the participating municipalities. But it turns out not be technically feasible and we have concluded there is too much uncertainty about the development of the coronavirus. A huge disappointment, but health comes first.”

“The change to the calendar resulted in a modification of the original program. We discussed this with our Dutch partners, with whom we have worked in absolute harmony and in complete collaboration. We realised that it would be impossible to carry out this project under these new constraints”, explained the General Director of Unipublic, Javier Guillén. “It is a complicated decision, one you never want to make, but which we have found ourselves compelled to do due to the complex circumstances we are currently living, which surpass any foreseeable expectation”, he added.
LA VUELTA 22 ON THE HORIZON
Unipublic and La Vuelta Holanda are working on the possibility of the Netherlands hosting the official departure in the very near future. The first potential start date being discussed for the country to host the La Vuelta departure is 2022, but with no certainties. In this sense, Javier Guillén has insisted that resuming the departure from Holland is “a priority” for the organisation. “We have seen so much enthusiasm and a very high degree of involvement. It is a pleasure to work like this. The very least we can do is to begin exploring the possibility of departing from the Netherlands in the near future, and we trust that we will be able to do so as soon as possible”, he specified. 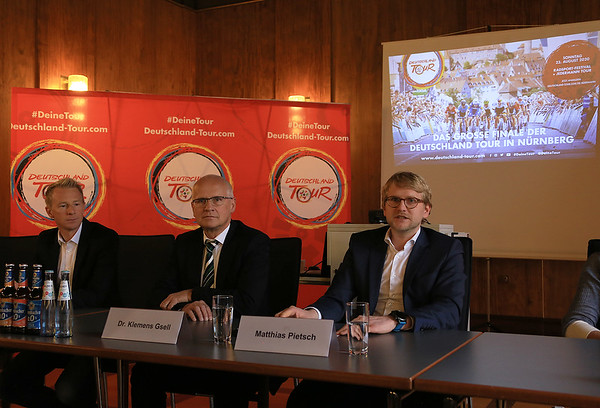 Following the President’s address on Monday evening, where large-scale events were banned in France until mid-July as a part of the fight against the spread of COVID-19, the organisers of the Tour de France, in agreement with the Union Cycliste Internationale (UCI), have decided to postpone the Tour de France to Saturday 29th August to Sunday 20th September 2020.

Initially scheduled to take place from the 27th June to the 19th July, the Tour de France will follow the same route, with no changes, from Nice to Paris.
Over the last few weeks, there has been constant communication between riders, teams, the organisers as well as other relevant third parties all with the support of the UCI, who are responsible for arranging a new global cycling schedule, in which the Tour de France takes pride of place.

The organisers of the Tour de France are in regular contact with and have reached agreement with all of the different parties involved, from the local communities to the public authorities.
The women’s event, La Course by le Tour de France avec FDJ, which was initially scheduled to take place on the 19th July on the Champs Elysées, will also be postponed to a date that is still to be determined, but it will take place during the Tour de France 2020. Equally, the 30th edition of the Etape du Tour cyclosportive, originally schedule to take place on the 5th July, will be postponed to a date yet to be determined.

We would like to thank all of cycling’s stakeholders, the Tour de France’s partners, its broadcasters as well as all of the local authorities for their reactivity and their support. We all hope that the 2020 Tour de France will help to turn the page on the difficult period that we are currently experiencing.
@ASO