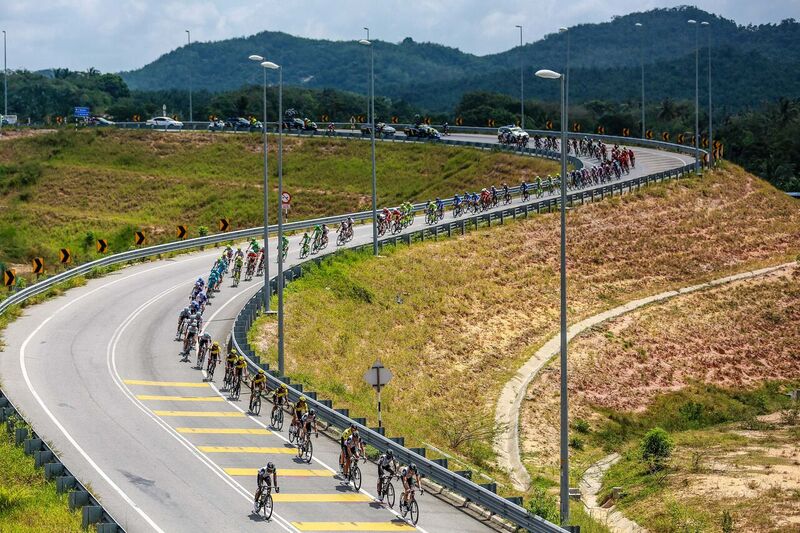 PARIT SULONG – Astana’s Andrea Guardini claimed his 21st victory at Le Tour de Langkawi in stage 7 of the 21st edition of the event. The Italian outsprinted his compatriots Jakub Mareczko of Southeast and Andrea Palini from Skydive Dubai in a tight finish at Parit Sulong where Reinardt Janse van Rensburg (Dimension Data) retained the overall lead on the eve of the grand finale in the historical city of Melaka.

The longest stage of this year’s race happened to be more eventful than anyone expected it to be. Juraj Sagan of Tinkoff was all fired up after finishing second in stage 6. He initiated a front group of six riders with Tanner Putt (Unitedhealthcare), Karol Domagalski (One Pro Cycling), Ma Guangtong (Hengxiang), Laurens De Vreese (Astana) and Meher Hasnaoui (Skydive Dubai). Former leader Miguel Angel Lopez of Astana who was avid of taking his revenge after losing the yellow jersey because of a mechanical rode flat out in the first hill of the day. He crested Bukit Miku (km 28) in first position with the aim of taking time bonus at the intermediate sprint in Johol (km 46) but Janse van Rensburg also made the front group of 25 riders that was formed after catching the initial attackers.

Six riders went clear before Johol, most of them for the second time of the day: De Vreese, Sagan, Putt, Domagalski, Gong Hyo Suk (KSPO) and Agung Sahbana (Pegasus). Several attacks occurred in that front group and at the head of the peloton led all day by Dimension Data. The maximum lead was 5.20 at km 145 when De Vreese, Putt and Gong were the remaining breakaway riders, rejoined by then by a Chinese duo from Hengxiang with Ma and Zheng Zhang. For most of the stage, De Vreese who was 2.05 adrift on GC was the virtual leader of Le Tour de Langkawi but Janse van Rensburg never panicked.

De Vreese was the last man to surrender with 5km to go, which gave a free ride to Astana’s sprinter Guardini who leapfrogged Mareczko in the last 50 metres. “After what happened yesterday, it’s normal that Miguel Angel was a bit angry but that’s cycling”, the Italian explained. “Astana had such a good tactic today with a strong rider [De Vreese] in the breakaway. Nobody wanted to pull strongly in the finale but it turned out to being a bunch sprint and it was a very good one for me. With 200m to go, I passed in a very small gap between two other riders but a bit of luck is always needed for winning a bunch sprint. To reach 21 victories at Le Tour de Langkawi is really amazing. It’s never simple to win.”