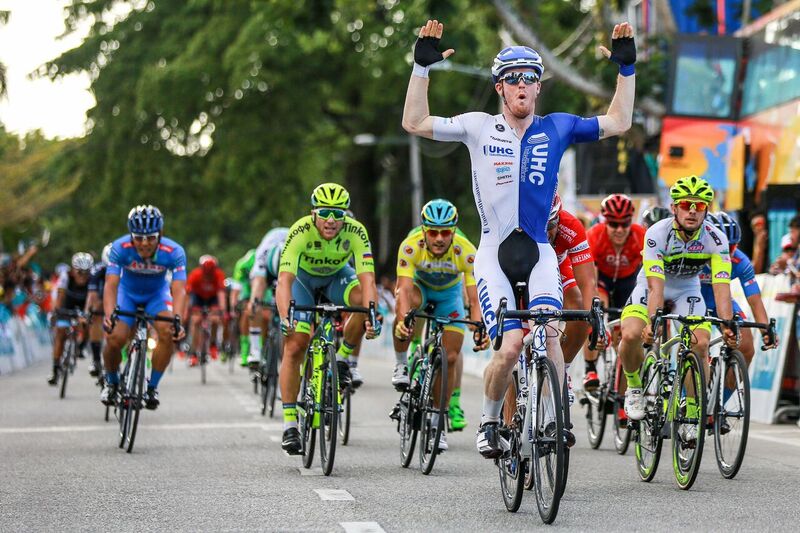 Wang, Loh, Ho and Goh passed the first category climb of Ringlet in that order. Wang and Goh were the last two breakaway riders caught by the main peloton in the final climb to Tanah Rata. With 5km to go, Lopez attacked in the steepest part of the climb. Johnny Clarke of Unitedhealthcare bridged the gap so the Colombian had to accelerate once again 3km before the line while his compatriot Daniel Jaramillo, also from Unitedhealthcare, chased him down but had to be content with the second place.

“It was a very fast stage”, Lopez commented. “I had to justify my team-mates’ dedication. With one rider less, it wasn’t easy to do so much work to make me win up here, but I attacked where I was told to do so. This is a very important victory for me. To start the season well will give me a lot of confidence and serenity for my further goals, the main one being the Vuelta a España.”

“Miguel Angel did a really good job and I’m happy for him because he’s a really good guy”, Guardini echoed after he retained the teal jersey of the points classification. “We wanted to play our cards as soon as possible in Le Tour de Langkawi, even though it’s hard to catch all the breakaways.”

For the first time, a Malaysian became the best Asian rider after the queen stage. “I thank my coach Adam Szabo, my team Terengganu, my family and my wife who came to watch me racing today”, said Adiq Hussainie Othman. “I wouldn’t be here without them. I’ve worked hard and lost a lot of weight to do well in this queen stage of Le Tour de Langkawi. I prefer long climbs like this one than steep ones like Genting. I did my best to stay in the first group. Now I’ll try to make history in becoming the first Malaysian to win the best Asian competition.”

Stage 5 will take the riders from Tapah to Kuala Lumpur with a detour in town under the iconic towers and the traditional finish at Dataran Merdeka. This is considered the sprinters’ queen stage. “It’s my favourite finish”, Guardini warned. “I’ve won it three times out of three. I want to make it four.”

Organised by Ciclista Sports Sdn Bhd, the 21st edition of Le Tour de Langkawi (LTdL) from 24 February to 2 March, 2016 is set to cover more than 1,100km over 8 stages, the UCI 2.HC (hors category) race featuring again as one of the biggest events on the UCI Asia Tour calendar.