However, the traditional stage finish at Izmir is complicated this year by the insertion of a Category One climb which peaks just 26 km from the finish line. After yesterday’s revolution, could the General Classification change yet again today? We will find out this afternoon. 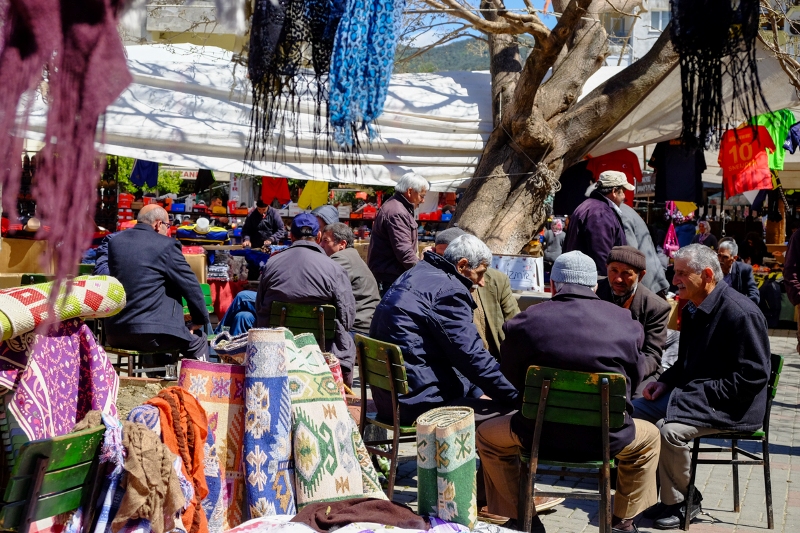 Among the historical and cultural jewels of the stage worth looking out for are the following:

km 115 – 50.5 to go – Niobe (38° 36′ 20.0″ N, 27° 25′ 24.9″ E): The historical figure on whom the mythological Tantalus was based – possibly the ruler of an Anatolian city named „Tantalís”, corresponding to modern-day Manisa – is said to have come from here. Tantalus was remembered for his eternal punishment in Tartarus. He was made to stand in a pool of water beneath a fruit tree with low branches, with the fruit ever eluding his grasp, and the water always receding before he could take a drink. Tantalus was a son of Zeus and the nymph Plouto, and father of Pelops, Niobe and Broteas. Hence the verb ‘to tantalise.’

km 125 – 41 km to go – Kadifekale (38° 24′ 49.4“ N, 27° 08′ 44.0” E): literally „the velvet castle“ in Turkish. A legend told by Pausanias narrates how Alexander, during a rest after hunting under a plane tree, was approached during his sleep by the two Nemeses worshipped by the Smyrneans, who bade him found a city on that very spot. The famous oracle in Klaros told Alexander;

Three and four times happy shall those men be hereafter, who shall dwell on Pagus beyond the sacred Meles.

Izmir
Izmir is the third largest city in Turkey and the biggest and most important settlement in the Aegean Region.

As the race nears its conclusion we take a ride out into the wild west of this years route, where the big guns will fight it out for glory in Izmir.

Slurping salty yoghurt (Ayran) and chewing away on a rather fine doner kebab made for a great start for my final day, and the race’s final day in the southern Aegean region of Turkey.
Gazing around the bazaar where old men sat playing board games, sipping tea and generally making the most of life I couldn’t help but feel a tad sad and sorry to be leaving this amazing region of Turkey.
As much as the journey had been about dissecting the race route and taking in the incredible and varied scenery, it was the people, their cultures and welcoming nature that was tugging away at my heart strings.
I’m fortunate enough to get to travel the world over, yet there are very few places where so many people are so genuinely warm and welcoming, particularly in the outreaches of the countryside. It had been a real treat to sit drinking tea, nibbling flat bread, and gesturing away with them during the past days.
There really is so much more to discover when the race has passed by, and it’s not too hard to make the most of it.
Pondering done with and I hit the road once more; destination Izmir, a bustling metropolis and long established major port.
It’s very much a case of out with the old and in with the new from here on in The bewilderingly varied sites of Ephesus a the many ancient ruins of the south coast gradually faded out of view as I approached the urban corridor towards Manisa and ultimately rolled over the hills to Izmir.
This is the wild west of the route, modern day Turkey, its industrious and mechanised, although there are some pretty impressive mountains thrown in along the way.
A fly by of Vestel City is quite poignant in many ways. Not only are Vestel a race sponsor, they are also gleaming success story for modern Turkey, and have become not only one of Turkey’s biggest brands, but also one of neighbouring Europe’s leading electrical appliance suppliers.
The bells will be ringing in my ears tomorrow as I drop into Istanbul for the final lap of the race, and although I’m a little sad to bid “hosca kalin” (goodbye) to the south I’m also looking forward to discovering the delights of this fascinating city.

Side ride – The section between Torbali and Kemilpasa does make for a challenging and scenic ride, which is also traffic light and a wide road.

The climb from Selcuk up to the stage 6 finish is also a must ride, if you have a mountain bike you can descend part way down and then turn right onto the trail which traverse the hillside, drop down and cross the main road and loop back to Selcuk on a back road.
There is also some sweet riding through the olive groves on the road from the coastal town of Kusadasi and Kirazli.

Turkish delight – Forget those cheesy 1970’s adverts for chocolate wrapped Turkish Delight, there is of course only one place to indulge on the real stuff, and that’s right here.
Lokum is how it’s called here, and you will see it being sold in countless varieties all over the place, which can be dangerous if you have a sweet tooth.
Made from a gel of starch and sugar and often seasoned with rose water and then powdered with icing sugar is how it’s usually delivered.
Pistachios, walnuts, dates and hazelnuts are also found in some lokum. Oranges and mint are also used to colour and flavour at times.
History has it that Bekir Efendi (Haci Bekir) came up with the concoction in 1777 after performing the Haji. The Haci Bekir confectionary company still makes lokum today.