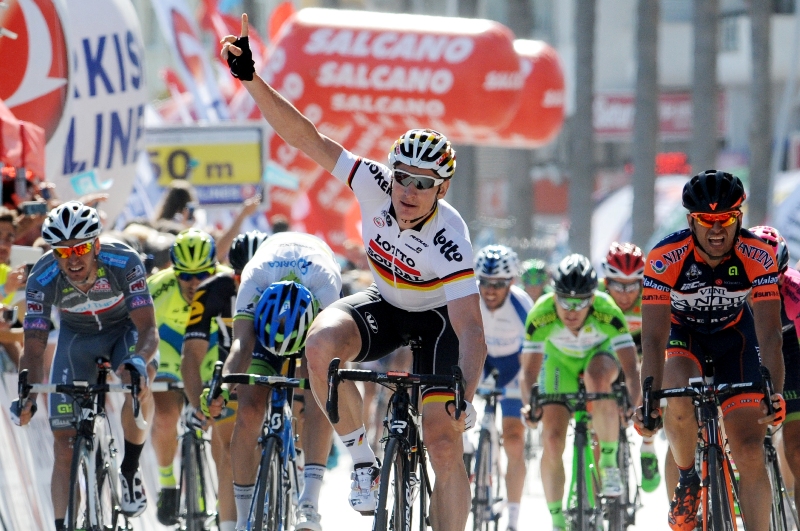 After every stage of the 2015 Presidential Cycling Tour of Turkey, you can download photos from this link; http://tourofturkey.org/photo

Marmaris, 29 April 2015 – André Greipel has taken the tenth stage win of his Presidential Tour of Turkey career at the stunning seaside town of Marmaris. Opening his account at this year’s edition, he burst from a restricted group at the end of a gruelling stage to win by three bike lengths. Second was Daniele Colli (Nippo – Vini Fantini), third was Daniele Ratto (UnitedHealthcare).

Going into the stage, none of the six had any points in the mountains or Beauties of Turkey sprints competitions, so the effect of the breakaway was to open up entirely new fronts in these two races within the race.

On the road leading to the intermediate sprint after 48.9 km, the 6 leaders were caught by the front part of peloton. Feillu held on to win the sprint, which ended:
1. Brice Feillu (Bretagne – Séché Environnement, 83) 5 pts
2. Adam Phelan (Drapac Professional Cycling) 3 pts 124
3. 1 pt 13
For the time being, at least, the lead of Mark Cavendish (Etixx – Quick Step) in the Green Jersey competition, sponsored by the Turkish bicycle marque Salcano, was safe.

The Beauties of Turkey sprint at km 100.8, dedicated to the rare and beautiful loggerhead turtles which nest in the area, ended: 1. Pozzo, 2. Planet, 3. Seeldrayers.
1. Mattia Pozzo (Nippo – Vini Fantini, 156), 5 pts.
2. Charles Planet (Team Novo Nordisk, 167), 3 pts
3. Kevin Seeldraeyers (Torku Şekerspor, 201), 1 pt
Pozzo’s sprint win was the clearest possible expression of his desire to defend the Beauties of Turkey sprints title that he won last year. He joined two other riders, José Gonçalves (Caja Rural – Seguros RGA, 94) and Mark Cavendish (Etixx – Quick Step), on 5 points, the latter by virtue of his stage 2 stage win. ready to challenge the leader of the White Jersey competition: Lluis Mas (Caja Rural – Seguros RGA), and his closest rival, Federico Zurlo (UnitedHealthcare), both with 8 points. Despite their absence from today’s breakaway, the riders of Caja Rural – Seguros RGA are still excellently positioned in the Beauties of Turkey sprint competition, sponsored by the Turkish manufacturer of household appliances Vestel.

Lotto-Soudal and CCC led the peloton but, with 30km to go, but the tall riders from Etixx – Quick Step appeared at the front, an indication that Mark Cavendish had regained the group and was positioned in the group for the end game. With 18 km to go, as Etixx – Quick Step forced the pace at the front, a crash occurred halfway down the peloton, affecting the riders the dossards 22, 153, 161, 204, and one or two more.

The group of six was caught by the peloton with 11.5 km remaining. By then, Etixx – Quick Step had disappeared front he front of the peloton, and Renshaw had been distanced by some metres by the rear of the group. A t that moment, five riders attacked: Carlos Quintero (Team Colombia, 116), McCarthy (Tinkoff – Saxo, 15), Serge Pauwels (MTN – Qhubeka, 131), Lluis Mas (Caja Rural, 96) and Valerio Agnoli (Astana Pro Team, 51).

At the bottom of the final descent into Marmaris, with 5 km to go, three Lotto Soudal riders led their sprinter, André Greipel, at the front of the peloton. Just as the catch seemed imminent, Mas and McCarthy darted away from the leaders. McCarthy held on until the final 500m, but then the sprinters came past and André Greipel (Lotto Soudal) burst through, all muscle and vitality, to win the tenth stage of his already brilliant Tour of Turkey career.

André Greipel (Lotto Soudal), winner, stage four
Q: How was today different from yesterday?
A: The first two days are spent cruising around. Everyone is fresh at the finish and everyone can sprint. But I like this kind of finish. It’s hard just before the finish. We had a good plan, and I think it’s a deserved win.
Q: How important was your team today?
A: The breakaway was 5 or 6 guys, and they had a big gap, but the team was pulling to keep them withing striking distance. De Gendt was one of the riders who worked hard until 2 km to go, then Adam Hansen did a big pull to bring the attackers back, and Jasper de Buyst set me up for the sprint.
Q: How frustrating was riding the TUR with injury last year?
A: I wasn’t able to take part in the sprints last year, and it’s hard for a sprinter to hold back in the sprint.
Q: How good is your lead-out man today, De Buyst?
A: He has a good eye as he comes from the track, so he’s a really good guy for the future, and I hope I can continue working with him in the future.
Q: How did you get out of the box with 500m to go?
A: I just tried to have a free wheel, to set my sprint. I had to go early, but it was a good, long, fast sprint,
Q: What are your goals for the second half to TUR?
We’ll see day by day. It’s a bit harder in the second part than it used to be. It all depends on the breakaways.

Mark Cavendish (Etixx – Quick Step)
Q: How much more difficult was today’s stage than yesterday?
A: We knew it was going to be hard. The racing over the last climb was harder than last year. Perhaps we were too motivated. The team pulled to close the gap in the second from last climb, and then, in the last 5-600m of the final climb, riding into the headwind, we just missed it. Perhaps we were over confident, pushing more than 300W in the 10km before the climb. But that’s life, we gave it our best shot.
Q: What are your targets for the rest of this TUR?
A: Tomorrow’s sprint, and then we have a good team for the last stage, which has changed for last year. It suits us down to the ground. I’m here to pick up stages and build my form.

Davide Rebellin (CCC Sprandi Polkowice), race leader overall
Q: How was your day?
A: Relatively calm, although there is always tension in the group in stage races, especially when a sprint is imminent. There was some wind, so we worked at the front in order to avoid surprises.
Q: On the last climb, Jay McCarthy, 4th in GC, attacked. What were your thoughts?
I didn’t want to follow his attack because I didn’t want to waste too much energy. I knew that it would be hard for him to get there, riding into the wind on long, straight roads. I knew that Greipel would stay at the front with his team, and that a sprint was probably inevitable.
Q: How do explain such great form at your age?
A: What keeps me well is the life I live. I do things I didn’t do before: my diet, my rest and recuperation are all better than 10 years go, which is where my results come from. I’m doing all the controls that everyone else does.

Daniele Colli (Nippo-Vini Fantini), 2nd in the stage
Everyone wanted to be on André Greipel’s wheel, but he went early. When I started my sprint, I was already several lengths behind. He was impossible to beat. I knew the stage finish at Marmaris because I finished third here three years ago. I’m happy. We are a small team, and wqe re taking on some big names here. After this race, I’ll go to the the Giro d’Italia to help Cunego.

Daniele Ratto (UnitedHealthcare), 3rd in the stage
Let’s just say it was a lively sprint. I found Colli’s wheel at the last moment, and he was on Greipel’s wheel. Catching Greipel was in the realm of the impossible. I rode as hard as I could today. I’ve never had a team work for me the way UnitedHealthcare did today. I had one or two doubts about my condition after yesterday’s stage, but all my team-mates stayed around me and helped me all the way to the end. I have to thank them because, without them. I would have given up very early on in the sprint.

Lluis Mas (Caja Rural), leader in the Beauties of Turkey sprints competition
I attacked near the top of the last climb to allow my team not to work at the front. I feel good, so I go for it. We were still ahead 500m from the finish line, but we were caught. Then, my sprinter, Carlos Barbero, went into action [7e]. From tomorrow, I’ll have one more rival [Mattia Pozzo] to keep an eye on for the White Jersey.

km 139.0 – 20.9 km to go – the road that leads, 55 km away, to Aphrodisias (37° 42′ 30″ N, 28° 43′ 25″ E): settled during the Early Bronze Age, it became a small ancient Greek city named after Aphrodite, the Greek goddess of love, who had here her unique cult image, the Aphrodite of Aphrodisias. later became the home of a grand temple to Aphrodite, the goddess of love. Its white marble ruins stand amid fertile fields in a green valley.

km 159 – Stage finish – Pamukkale (37° 55′ 13.8″ N, 29° 7′ 15.6″ E): meaning „cotton castle“ in Turkish, Pamukkale is a World Heritage Site for its terraces of travertine, a sedimentary rock deposited by water from hot springs. 17 hot water springs in which the temperature ranges from 35 °C (95 °F) to 100 °C (212 °F). The water that emerges from the spring is transported 320 metres (1,050 ft) to the head of the travertine terraces and deposits calcium carbonate on a section 60 to 70 metres (200 to 230 ft) long covering an expanse of 24 metres (79 ft) to 30 metres (98 ft). When the water, supersaturated with calcium carbonate, reaches the surface, carbon dioxide de-gasses from it, and calcium carbonate is deposited. The depositing continues until the carbon dioxide in the water balances the carbon dioxide in the air. Calcium carbonate is deposited by the water as a soft jelly, but this eventually hardens into travertine.
The hot springs have been used as a spa since the 2nd century BC, with many patrons retiring or dying there. The large necropolis is filled with sarcophagi, most famously that of a local miller called Marcus Aurelius Ammianos, which has a raised relief depicting a Roman water-powered stone sawmill known as the Hierapolis sawmill, the earliest known example of a crank and rod mechanism.
Hierapolis (Ancient Greek: Ἱεράπολις, lit. „Holy City“) (37° 55′ 30″ N, 29° 7′ 33″ E) was an ancient city located on hot springs in classical Phrygia in southwestern Anatolia. Its ruins are adjacent to modern Pamukkale in Turkey and currently comprise an archaeological museum designated as a UNESCO World Heritage Site.