Click here for full stage results, or go to https://www.tourofturkey.org/2015/results

After every stage of the 2015 Presidential Cycling Tour of Turkey, you can download photos from this link; http://tourofturkey.org/photo

Istanbul, 3 May 2015 – Kristijan Durasek (Lampre – Merida) won the 2015 Presidential Cycling Tour of Turkey this afternoon, at the end of the eighth and final day of the Presidential Cycling Tour of Turkey. The stage, Istanbul – Istanbul, 124 km, took place in the monumental surroundings of one of the world’s great cities and spanned continents, crossing the Bosphorus Bridge between the European and Asian landmasses.

Lluis Mas (Caja Rural – Seguros RGA, 96) won a scintillating stage finish. With 1.3 km to go, and a sprint finish apparently inevitable, the Mallorcan darted away from the group and held on to finish ahead of Mark Cavendish (Etixx – Quick Step), second. Mas crossed the finish line wearing the White Jersey, sponsored by the Turkish white goods brand Vestel. His successful TUR concluded with victory in that competition, too. Mas make it alone, despite the chase by Cavendish
(Click through for Hi Res. Photo credit: Tour of Turkey/Brian Hodes)

Cavendish had to be content with 2nd place, and overall victory in the Green Jersey competition, sponsored by Salcano. Mas’s Caja Rural – Seguros RGA team-mate Carlos Barbero (92) was third in the stage, completing a truly excellent TUR for the Spanish team. The jerseys.
(Click through for Hi Res. Photo credit: Tour of Turkey/Brian Hodes)

The story of Stage Eight

The stage started beside the extraordinary Sultan Ahmed (or Blue) Mosque.

The leading quartet reached its maximum advantage of 2’15” at km 56 (68km to go). With 60 km to go, the lead stabilised at 2 minutes, as the Chinese rider Xu Gang (Lampre Merida, 28) led the peloton, taking turns with Iljo Keisse (Etixx – Quick Step, 3).

With 33 km to go, Belletti’s lead-out man, Alessandro Petacchi (Southeast, 147), had a wheel change. Three km later, the former race leader Davide Rebellin (CCC Srandi Polkowice), fell, and received medical attention while standing at the road side. He received heavy strapping to the left calf, and held his left ribs in a gesture that suggested pain. He then abandoned the race and boarded an ambulance. Eduardo Sepúlveda (Bretagne – Séché Environnement) moved into 2nd place overall, and Jay McCarthy (Tinkov – Saxo) into 3rd.

Southeast and Bardiani – CSF also sent riders to assist the indefatigable Xu and Keisse at the front of the peloton. With 20 to go, the gap was around 1’25”. Despite the hard work of the leading quartet, the peloton was locked onto them. With 4 sprint teams committed to a bunch finish, the quartet’s minutes at the front were numbered. Their gap dropped to 1 minute with 14.5 km to go.

The leaders were caught 4.9 km from the finish line. A bunch sprint looked inevitable, but, with 1.3 km to go, Lluis Mas (Caja Rural – Seguros RGA, 96) darted out of the peloton. Behind him, Miguel Ágnel López (Astana Pro Team), another of the revelations of this TUR, fell. Mas entered the final sprint ahead, with Cavendish chasing. But the Spaniard held on to win the stage wearing the White Jersey. Cavendish, lacking Tom Boonen in his sprint lead-out, had to be content with 2nd place, and overall victory in the Green Jersey competition, sponsored by Salcano. Mas’s Caja Rural – Seguros RGA team-mate Carlos Barbero (92) was third in the stage, completing a truly excellent TUR for the Spanish team. 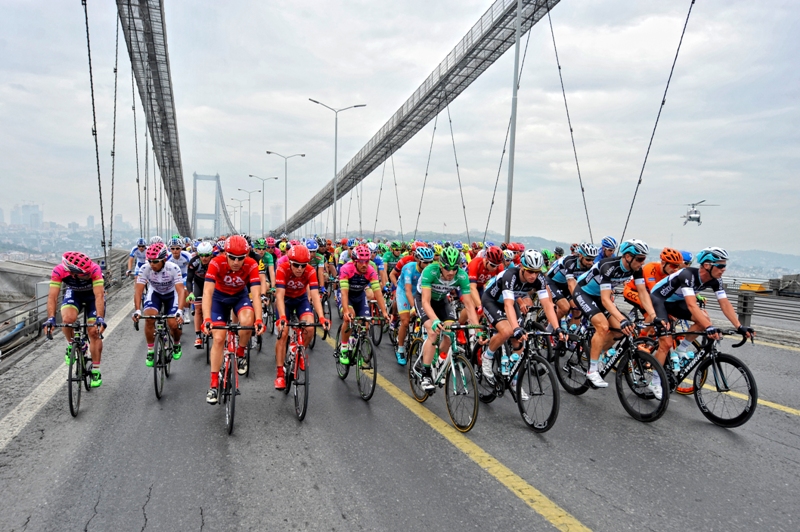 Crossing between continents: the peloton negotiates the Bosphorus Bridge
(Click through for Hi Res. Photo credit: Tour of Turkey/Brian Hodes)

Kristijan Durasek (Lampre – Merida), winner of the 2015 Presidential Cycling Tour of Turkey, and the Turquoise Jersey, sponsored by Spor Toto
Q: What does this victory mean to you?
A: It means a lot. It’s my second victory for Lampre and I’m very happy with it.
Q: You rode very calmly. Does that reflect your character?
A: Yes, normally I’m always calm, taking everything easy, int he race it’s like that. Always easy.
Q: Did you expect this victory?
A: I knew that I was going well, but it’s difficult to say ‘I’ll win it’ before the race, because you never know. I came here for victory, like at a lot of races, but this time I have done it.
Q: Were you ill last night?
A: I was really ill with a temperature of 38, a bad stomach and everything. I didn’t know if I’d start today or not. In the morning, I said to myself, I have to try. It was hard for me yesterday and today.
Q: What does this win mean for your career?
A: It doesn’t change a lot. The team knew my characteristics. In some races I have to help my team-mates, and in others I can ride for myself.
Q: What is your next race?
A: In theory, a Grand Tour. Now we have some ill riders, so I will see. Maybe the Giro d’Italia, but otherwise, Dauphine and Tour.
Q: Last week, there was a stage race in your native Croatia. Is it still more impotent to win an HC race like the TUR?
A: Yes. THe Tour of Croatia is a Category 1 race, and the Tour of Turkey is HC, so more this is important. I hope I can ride the Tour of Croatia next year, but they have to change the dates, because with the classics, Trentino and Turkey, there are a lot of races. If they want bigger teams, they will have to change the dates.
Q: What is your long term ambition?
A: I want to win a stage in a Grand Tour, it would be a dream come true, or a big classic.

Lluis Mas (Caja Rural – Seguros RGA), stage winner, winner of the White Jersey, sponsored by Vestel, and of the Teams Classification
Q: Was your final attack planned or instinctive?
A: My first job to work for Barbero, our sprinter. We knew that he could win today. He was 2nd the other day (ed. at Pamukkale in stage 5). But I was first around the last corner and my teammate said, ‘Don’t stop, don’t stop…!’ so I didn’t.
Q: You were attacking all week…
A: I feel fantastic. Today, I was thinking of my son, Lluis. I became a father in September, and this is the best present for him. It’s my first victory in a pro race. I won a race in Portugal 3 years ago, but this is my first, most important victory. I’m very happy. All the week, I worked every day to get into breakaways, and to win the Beauties of Turkey sprints competition, but this stage win is the best.
Q: Is it special to beat Cavendish?
A: I thought it was not a clear final for the sprinters. Their teams couldn’t work easily. In the last few kilometres, with 2 team mates, we worked to try and break the group, thinking of Barbero.
Q: How is the team spirit?
A: It’s a big family. At all the races, we are a really happy team. We work for each other, and when when one of us wins, the whole team wins. Without his puncture in stage 3, we came here thinking that Bilbao could win the overall. He had bad luck. We had options with Parra, a good climber, but he couldn’t stay in the front in the General Classifciaton.
Q: Are you ready for a bigger team?
A: I’m happy in this team but every rider wants to be in a big team.
Q: What are your ambitions for the rest of the season?
A: I like the classics. I’ll go to 4 days of Dunkirk next and I’ll try and be high in GC, then I have 3 weeks to relax, and then the team will name 10 names for the Vuelta. I’ll either relax in the summer and ride the Vuelta, or ride in the summer and relax during the Vuelta.

Mark Cavendish (Etixx – Quick Step, 1), 1st Points competition and Green Jersey, sponsored by Salcano
A: How happy are you to retain the Green Jersey?
Q: I’m super happy. When Greipel won (ed. at Marmaris in Stage 4), I expected to get over the climb and keep the green jersey. I’m glad to get it back not he last stage. I’d have liked to have won the stage. We tried our hardest.
Q: What did you think of this year’s Presidential Cycling Tour of Turkey?
A: It was similar to last year: a really nice race. A lot of World Tour races can take organisational ideas from the Tour of Turkeuy and put them to use. For me it’s one of the best organised races of the year, in a beautiful country. The riders come first here. It’s nice to come here. After my first time last year, I wanted to come back.
Q: What is your race schedule now?
I fly directly to the Tour of California, race there, then Suisse, British championships, the Tour de France, and after that, it is not yet settled.

Juan Pablo Valencia (Team Colombia), Mountains category leader, Red Jersey, sponsored by Turkish Airlines
Q: Do you have a dedication for the jersey?
A: Yes, I want to dedicate this to my uncle, Nemesio González, who sadly died on Thursday. He was one of the people who helped me and fed me when I was a child. And to the race organisation, and my team: we worked well together, we had a strong team. Sadly, we will not be at the Giro, but we will prepare ourselves for the Vuelta.
Q: How important was the team in wining this jersey?
A: Very important. Before the stage yesterday, in our team meeting, we decided to try to neutralise the 2nd climb. We knew Rebellin was a contender, and the Qhubeka guy (ed. Songezo Jim). We kept an eye on them, so the jersey belongs to all the team.

Peio Bilbao (Caja Rural – Seguros RGA), winner of Stage 6 and of the Teams Classification:
Just to be invited to the Tour of Turkey, with some of the best teams in the world, was an honour, and to go home with two stage wins and the Teams Classification is a fantastic result. Team work was the key to our success here. The TUR is the turning point in our season. We started the season in difficulty because of injuries and illness, but now, we are on the right trajectory. In theory, Caja Rural – Seguros RGA is a small team with limited resources. Winning here and in Italy (the Tour of the Apennines with Omar Fraile) in the same week is great for us.‘

Eduardo Sepúlveda (Bretagne-Séché Environnement), 2nd overall:
This isn’t the way I’d have liked to finish second in the TUR. It’s a shame about Rebellin. I hope he’s OK soon. To stand on the final podium, whether it is second or third, is a good result which will give me confidence. with this result, I can continue to work calmly for July 9ed. and his first Tour de France). My team with continue to gain points to keep the leadership of the Europe Tour, which is good.

Jay McCarthy (Tinkoff Saxo), 3rd overall:
I didn’t expect to be on the podium today. It’s a bit of a shame that Rebellin crashed. It’s part of bike racing I guess. Sometimes you can be on the lucky side of accidents but that’s not the way I wanted to make the top 3. Anyway, I’m happy with my week of racing here in Turkey. The hard work has been fruitful.

On behalf ot he Presidential Cycling Tour of Turkey, thank you for covering our race this year, and we look forward to your company at the 52nd TUR in 2016.