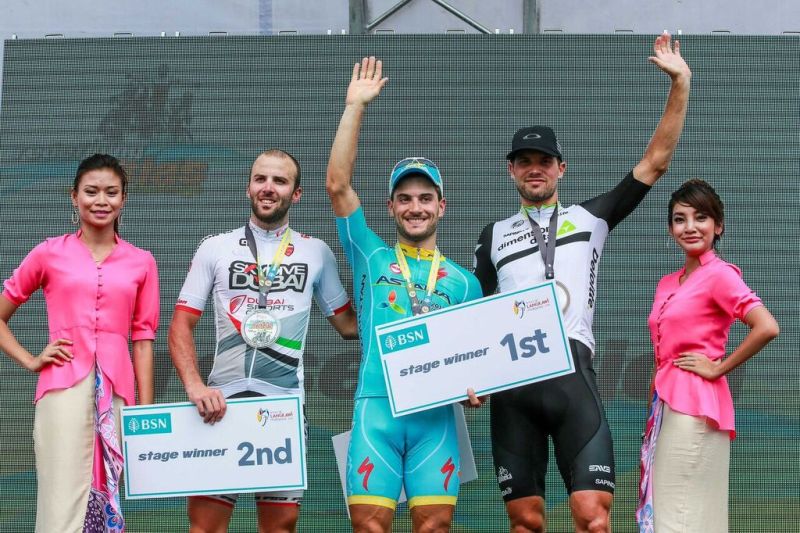 KUALA LUMPUR -Andrea Guardini became the first rider to reach the number of 20 stage victories at Le Tour de Langkawi – out of 37 in total in his six-year long pro career at the age of 26 – as he claimed the sprinters’ queen stage at Dataran Merdeka, Kuala Lumpur, making it four out of four on the race’s most prestigious venue. Coming third while stage 2 winner Andrea Palini finished second, South Africa’s Reinardt Janse van Rensburg who is second overall to Colombia’s Miguel Angel Lopez diminished his deficit from 29 to 23 seconds with three stages remaining.

It took 63 kilometres for the breakaway of the day to take shape. Beforehand, Guardini had to go for the first intermediate sprint against Janse van Rensburg to protect the overall lead of his team-mate Lopez. The Dimension Data fast man took two seconds there but sustained a flat tyre 2km before the second intermediate sprint, so Guardini could give way to the riders fighting for fifth place overall. Bardiani’s Luca Chirico and Jesper Hansen captured three and two seconds bonus respectively. Then it was time for breaking away.

Racing for the King of the Mountains competition, Wang Meiyin (Hengxiang) rode on the offensive again, and once again with Loh Sea Keong who was accompanied by another rider from Malaysia national team Aiman. Amirul Mazuki (Terengganu) and Kim Hyeonseok (KSPO) were the other members of the move before Carlos Manarelli (Funvic) rejoined them to compose a six-man front group. They had a maximum advantage of 3.20 at km 77.

In the finale, John Ebsen and Richard Handley, both from One Pro Cycling, came across to the two remaining leaders Loh and Amirul. They got reined in nearby the famous twin towers of Kuala Lumpur.

The inevitable bunch sprint was easily won by Guardini. “It’s a wonderful day for me and a perfect fourth win here on my favourite finishing line of Le Tour de Langkawi”, the Italian declared. “Every time I come to Kuala Lumpur, I win, it’s fantastic. With 20km to go, my mind was all set on this finish location. I could feel a lot of adrenaline in the run in. I knew exactly where I needed to pass my adversaries to outsprint them. We took control of the race and I had a really good sprint.”