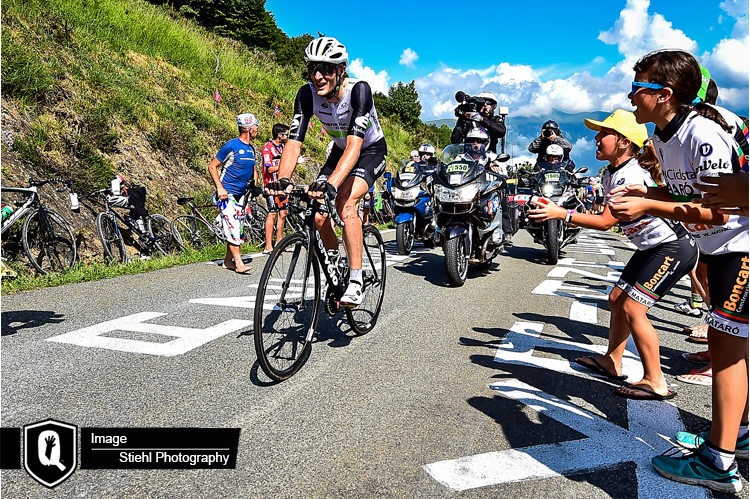 A dream 4th stage win for Team Dimension Data for Qhubeka at 2016 Le Tour de France
Steve Cummings won stage 7 of the Tour de France in typical Steve Cummings fashion, attacking from the original break of the day, to win solo in Lac de Payolle. Daryl Impey (Orica-BikeExchange) made it an even better day for African cycling as the South African finished in 2nd place. Daniel Navarro (Cofidis) was 3rd.

The 7th stage got off to a fast start with Mark Cavendish and Peter Sagan (Tinkoff) attacking from kilometer zero. 10 other riders joined the Green Jersey contenders but the peloton weren’t content on letting Sagan and Cavendish get away. As soon as their group was caught, the counter attacks started and Team Dimension Data for Qhubeka were fully switched on as Edvald Boasson Hagen made a new break with 3 others. Once again, a few kilometers down the road this break was also caught. The third escape would be the defining move of the day and 29 riders rode clear after 40km of racing, including Cummings.

Due to the constant attacking, nearly 50km were covered in the first hour and so when the break went clear, the peloton sat up for moment to regain composure which allowed the break to go 5 minutes clear. There were some big names in the escape group, with the yellow jersey race leader, Greg van Avermaet (BMC Racing) also present. With the stage ending after an ascent of the Col d’Aspin, the climbers in the breakaway like Vincenzo Nibali (Astana) and Navarro were definitely the favourites for the stage.

Cummings was not in favour of reaching the Aspin with this big group and so when Navarro, Antoine Duchesne (Direct Energie) and Matti Breschel (Tinkoff) got a 15 second gap on the lead group, Cummings rode across to the trio and injected some real pace into their attack. This caused a reaction in the chase and the big group split as 9 riders then tried to come across to the 4 leaders. The junction was just about to be made with 26km to go but before the chasers made contact, Cummings counter attacked and went solo.

The Col d’Aspin was a 12km category 1 climb that topped out 7km before the finish in Lac de Poyolle. The odds were stacked against Cummings as he was alone, being chased by 12 riders who were just 30 seconds behind him when the Aspin began. Everybody thought Nibali and Navarro would be able to bridge the gap to Cummings, and they tried, attacking on the very lowest slopes of the Aspin. Cummings held a consistent pace though and he was totally committed to the move.

In the end, Cummings even put time into his closest chasers on the Aspin. With the peloton still 4 minutes down on Cummings as he began the descent to the line, he just needed to stay upright to take an incredible victory. Cummings was able to do so with ease and the Brit was even able to savour the moment, crossing the line just more than a minute ahead of Impey. Another unbelievable day for our African Team, as we have now won 4 out of the first 7 stages, a feat we couldn’t have even dreamed of. Mark Cavendish retained the lead in Green Jersey points competition too, ensuring we had two riders on the stage podium today.

Steve Cummings – Rider
That was sweet. After what has already happened this week, it is just fantastic to have won. Of all my victories, I think this has to be my best one. I wasn’t confident in that big group and putting pressure on them, I thought, was my best option. The Aspin is also a climb that suits my characteristics. The group behind was obviously on the limit so I just carried on, as you do, and I was able to win. I am really happy for the team and thankful that they believe me. I hope that people are really starting to get that we are racing to put kids on bikes with Qhubeka, it just makes everything that much more special for us and has put the team on a high.