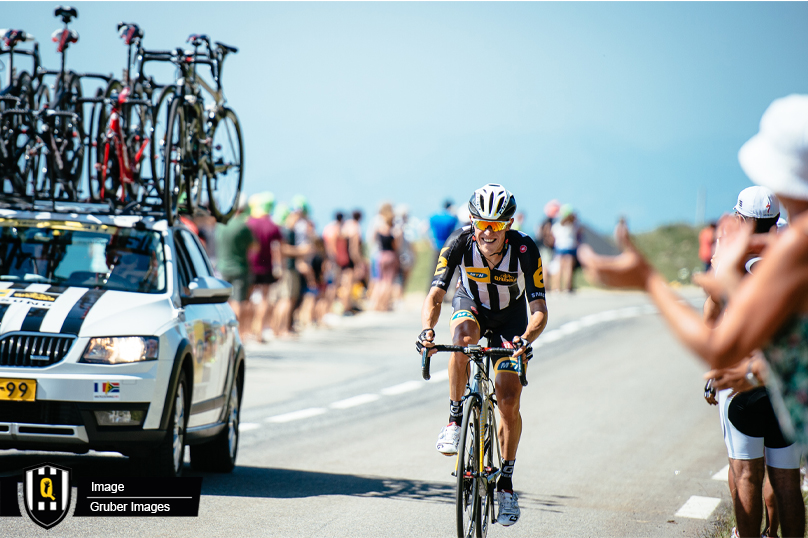 Pauwels stays 13th and MTN-Qhubeka p/b Samsung remain 5th team
The 20th stage of the Tour de France would be the final battle for the GC riders with Thibaut Pinot (FDJ) taking the spoils on Alpe d’Huez. Nairo Quintana (Movistar) would be the rider in 2nd place while Ryder Hesjedal (Cannondale-Garmin) completed the podium.

The race came down to the infamous Alpe d’Huez, where the break was absorbed back into the yellow jersey group and the climbers of this year’s Le Tour came to the fore. MTN-Qhubeka p/b Samsung still had Serge Pauwels in contention, with Steve Cummings also on hand to provide support as the team looked to defend Serge’s 13th position on GC.

Thibaut Pinot (FDJ) would be one of the main aggressors as he got the jump on the favourites group early on, on Alpe d’Huez. Quintana though had good legs and set off in pursuit of the Frenchman while race leader, Chris Froome (Team Sky) could not respond to the Colombians accelerations but rode within himself to hold on to his leaders jersey by the end of the stage.

Pinot would be rewarded for his opportunistic attack with the stage win while Quintana won over more fans with his attacking riding style to finish 2nd. Hesjedal, also won of the initial attackers on the final climb held on for 3rd. With Steve Cummings guiding Serge home 5 minutes down, and Daniel Teklehaimanot just a few minutes back, MTN-Qhubeka p/b Samsung easily held on to 5th place in the overall team competition.

Serge Pauwels – Rider
Today was really tough because I could start to feel that I was becoming pretty empty. It was already a big war on the Croix de Fer and luckily I could come back on the descent because I was actually dropped on the Croix de Fer itself. I was back in the yellow jersey group before the Alpe d’Huez started and then I just rode Alpe d’Huez at my own rhythm. My challengers for 13th position only really came back to me with 4km to go and then I had to give everything to stay on the wheel but I succeeded and I am super happy with the result overall.

Steve Cummings – Rider
It was a really good stage. I’ve never done Alpe d’Huez before so it was just a great way to wrap up what has been a great tour for us. There is not much else to say, it has been a great 3 weeks with the team.