„Egan will once again target the yellow jersey in France and we are very excited to give last year’s Giro winner, Richard Carapaz, his debut in this year’s Tour also,“ Brailsford said, announcing the selection decision on Wednesday morning.
„Geraint will target the Giro and take on the opportunity to double up his Tour de France win with another Grand Tour title, with the aim of being the first Welshman to win it.

Foto: Gerhard Plomitzer
„In turn, Chris Froome will target the Vuelta. Chris is a legend of our sport, a true champion who has demonstrated incredible grit and determination to come back from his crash last year. We want to support him to compete for another Grand Tour title and the Vuelta gives him that little bit more time to continue his progress to the top level.

„I am very proud that we have several current, and I am sure future, Grand Tour champions in the team. Selecting the right leader in the right race with the right support team is critical and has meant we have had to analyse all the latest information to make sure we are in the best position possible to optimise our performances in the coming months.“
Team Ineos will be known as the Ineos Grenadiers for the Tour de France.
They confirmed that their eight riders for the Tour will be:

„We have been analysing closely how we can win the Tour de France this year and we have a passionate team united by a common purpose, ready to get the job done,“ Brailsford said.

Sir Dave Brailsford said: „Chris’s current contract comes to an end in December and we have taken the decision now not to renew it. We are making this announcement earlier than would usually be the case to put an end to recent speculation and allow the Team to focus on the season ahead.

„Chris has been with us from the start. He is a great champion and we have shared many memorable moments over the years but I do believe this is the right decision for the Team and for Chris. Given his achievements in the sport, Chris is understandably keen to have sole team leadership in the next chapter of his career – which is not something we are able to guarantee him at this point. A move away from Team INEOS can give him that certainty. At the same time, it will also give other members of our Team the leadership opportunities they too have earned and are rightly seeking. I am excited about the talent we have right across the Team at the current time and all our collective focus is on preparing for the season ahead. Like everyone across the sport we are all looking forward to the start of racing next month.“

Chris Froome said: „It has been a phenomenal decade with the Team, we have achieved so much together and I will always treasure the memories. I look forward to exciting new challenges as I move into the next phase of my career but in the meantime my focus is on winning a fifth Tour de France with Team INEOS.“
@Team INEOS

Hope that I can set this straight, I was last at a training camp at the beginning of December. My recovery is going well and I will be heading to my next training camp on Thursday. Onward 👊 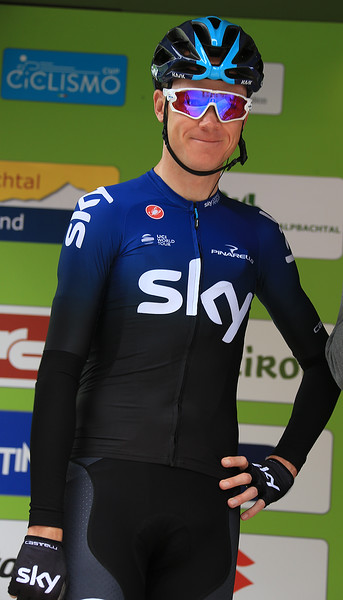 Chris Froome is ready to gauge his form at the upcoming Criterium du Dauphine as he continues to build towards July.
The six-time Grand Tour winner recently completed a second training stint in Tenerife and has pronounced himself happy with his form ahead of his fifth race outing of the year.
With three victories at the Dauphine already on his palmares, Froome has often used the prestigious event as a final build-up race to the Tour de France. He will be supported at the Dauphine by Vasil Kiryienka, Michal Kwiatkowski, Gianni Moscon, Wout Poels, Ian Stannard and Dylan van Baarle.
Speaking after returning from Tenerife, Froome told TeamINEOS.com: “This approach and build-up to July is something we’ve tried and tested quite a few times over the years now. Our camp went really well, and as always at the second camp in Tenerife I start to feel a lot more ready for racing. Now I’m looking forward to pinning on some numbers at the Dauphine.

“It’s hard to say where I’m going to be, given I haven’t done much racing recently, but I’d like to be there fighting for the overall win at the Dauphine. The Tour group as a whole is moving forward and looking really good and ready for the next couple of months ahead. So hopefully we’ll have a really strong outing at the Dauphine as well.
“I think it’s a pretty good, well balanced route. There are a few lumpy days, a time trial and then some big mountain days. We’ll definitely get a good gauge of where we’re at after doing this Dauphine as there’s a bit of everything there.”

For Froome and fellow Dauphine team members Kwiatkowski, Poels and Van Baarle, time spent in Tenerife enabled them to put in those crucial kilometres and hone form.
“I’m really happy with where I’m at currently,” Froome added. “I was probably a bit eager earlier this season in Colombia and probably did a little bit too much. I feel like this camp has been very different to that and I’ve been able to do exactly what I need to do. The feelings are quite different now having come back from Tenerife, if I compare them to how I felt when I got back from Colombia.”

Froome’s Tour build-up is markedly different to a 2018 season which saw him battling hard across three weeks at the Giro d’Italia – eventually emerging successful.
On reverting back to a more traditional Tour run-in this year he admitted: “It was quite nice in a way watching the Giro on the TV and actually not racing. Also remembering my feelings coming out of the Giro last year – it’s so different to how I feel right now. Hopefully I’ll be a lot fresher now coming into this next block and more ready to race, as opposed to being on the back foot trying to recover from the Giro.”
Froome also reserved praise for young Team INEOS team-mate Pavel Sivakov after watching him ride to a superb ninth place in Italy.
“Pavel was very, very impressive. For a 21 year old to have ridden a top 10 in just his second Grand Tour – that takes some doing and it goes a long way to showing what kind of engine he has for the future.”
@Team INEOS

END_OF_DOCUMENT_TOKEN_TO_BE_REPLACED

Vuelta a Espana #12: So close yet so far as Omar Fraile comes 2nd
Team Dimension Data for Qhubeka down to 4 but fight on
Tomasz Marczynski (Lotto-Soudal) won his 2nd stage of this year’s Vuelta a Espana by taking the spoils on stage 12 today. Omar Fraile came close for Team Dimension Data for Qhubeka once again but had to settle for 2nd place. Jose Joquin Rojas (Movitar) finished 3rd.

END_OF_DOCUMENT_TOKEN_TO_BE_REPLACED

Team Dimension Data for Qhubeka finished off this year’s Tour de France with another podium performance by Edvald Boasson Hagen who sprinted to third place on the final stage of the race.

Per tradition, the day started out with smiles and laughter as the riders left Montgeron and headed towards Paris. However, as the peloton entered the iconic circuit on Champs-Élysées, the faces of the riders were now very focused and ready to race hard.

Multiple riders tried to escape as they started on the eight laps and ultimately, a strong group managed to distance the peloton. Jaco Venter and Steve Cummings helped to set the pace in the pack and with 10 km left to go, it was all back together again.

The remaining Team Dimension Data for Qhubeka riders always kept Boasson Hagen near the front and together with Reinardt Janse van Rensburg, the fast Norwegian entered the final corners in a good position.

Dylan Groenewegen (Team LottoNL-Jumbo) started his sprint early and quickly opened up a small gap. Boasson Hagen tried to close the gap but at the end, he had to settle for third place. In addition to his impressive victory on stage 19, this was the fifth time Boasson Hagen finished in Top3 during this Tour de France.

END_OF_DOCUMENT_TOKEN_TO_BE_REPLACED

In Paris on Sunday evening, Uran climbed onto the podium as the 2017 Tour de France runner-up to Froome, who secured his fourth Tour title.

“Finishing second to Froome at less than a minute seems pretty good to me,” said Uran. “It’s a quality final podium in Paris, so this is the greatest success of my career. This result is dedicated to my family, friends, my team and everyone who has supported me during the last three weeks.”

While the 22-kilometer lone effort out on the roads of Marseille determined the final general classification order, it was, of course, a culmination of work done up until that point to put Uran in a position to capitalize on a strong penultimate stage time trial.

A stage win into Chambery on the final day of the first week announced Uran as contender. From there, Uran’s star rose alongside his results as he cannily pocketed bonus seconds, 22 in total, and carefully metered his efforts.

“We knew it would be difficult to win the Tour but not impossible, so we gave it everything,” said Uran. “It’s been a great Tour.”

At Uran’s disposal as the race unfolded was a Cannondale-Drapac squad that included three Americans and four Tour debutants, a team selected largely to target stage wins, breakaways and animate the race. The squad punched above their collective weight, particularly in the final two weeks of the Tour when general classification ambitions became more realistic, more poignant.

“Many things came together for us to end up here,” noted head sport director Charly Wegelius. “Rigo finally had a clear run at a three-week race without hiccups, on a route that suited both him and our style of racing. His teammates all rose to the occasion and made up for their lack of experience – we had four Tour rookies! – with heart and hard work. I’m very proud of them.”