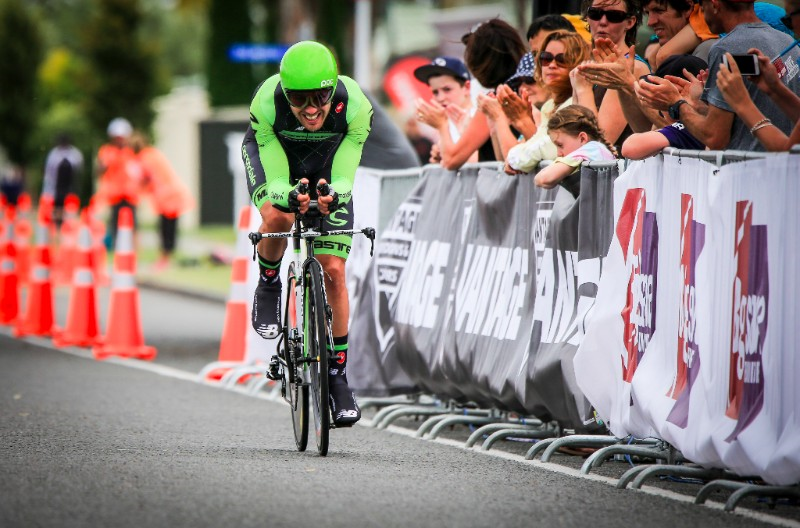 Paddy Bevin has been billed as one to watch in his first year in the WorldTour and on Friday he showed the rationale behind the hype as he stormed to victory in the individual time trial at the Big Save Elite Road Championships in New Zealand.

Best known for his prowess in the fast finishes, Bevin wouldn’t be the first Kiwi name to spring to mind for a top time trial result, but the technical nature of the 40-kilometer course worked to his advantage.

The 24-year-old targeted the race against the clock as his first early season goal, and with a time of 52:21, he easily overpowered his opposition. Thomas Sully (Drapac) was 1:13 back in second place. Bevin’s former teammate, Joe Cooper (Avanti IsoWhey), rounded at the podium at 1:41.

“It’s a great way to get a run on the board in the first day of the year,” said Bevin. “For me, coming up, making the step, it’s just nice to come in straight away and put my hand up and say: ‘Look, here I am.’ Personally, it was really good to take the win. It was an early season goal and fits in nicely for how the season builds. Obviously for the team, it’s a positive way to start the season.”

“Versatility is a strength I need to have as I make the step up,” Bevin added. “Races get harder and harder and harder. Even if you want to be a sprinter, you have to be good just to make it to the finish. Part of it is training, goal selection, race selection. This time trial is one I circled. It suits me.”

Bevin posted the quickest times from start to finish but said even when he had 20 seconds up at the first intermediate split, he couldn’t relax. The tough course was demanding until the very end.

“It was a really tough day,” said Bevin. “The way you saw the splits come away was a testament to that. It was never sealed. You could have a bad moment and lose time at any point. It was about keeping the rhythm and making sure you had enough to go the whole distance because you had to make something of every meter of that course.”

While doing the double is rare, Bevin remains upbeat about his chances to defend his road title in Sunday’s race.

“It’s a hard one to read,” Bevin noted. “Compared to Christchurch [last year], it opens up a multitude of different ways it can be raced, it can be ridden and it can be won. You have the team aspect and the course aspect, but someone has to cross the line first.”