The 99th edition of the Corsa Rosa beings today with a 9.8km ITT and a host of stars in the line up. Today’s favourite are the specialists Tom Dumoulin, Fabian Cancellara and Bob Jungels. 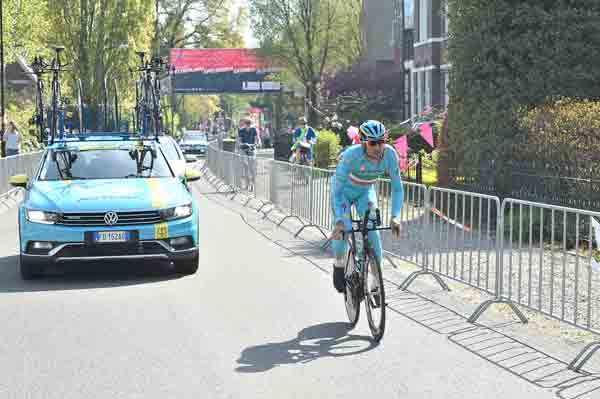 Apeldoorn, 5 maggio 2016 – Good morning from Stage 1 of Giro d’Italia, from 6 to 29 may and organised by RCS Sport/La Gazzetta dello Sport, the Apeldoorn – Province of Gelderland – 9.8km Individual Time Trial.

The first rider to start is Fabio Sabatini (Etixx – Quick Step) at 13.45. The other riders follow at 1′ intervals, with the last rider, Michael Hepburn (Orica GreenEdge), at 17.02. 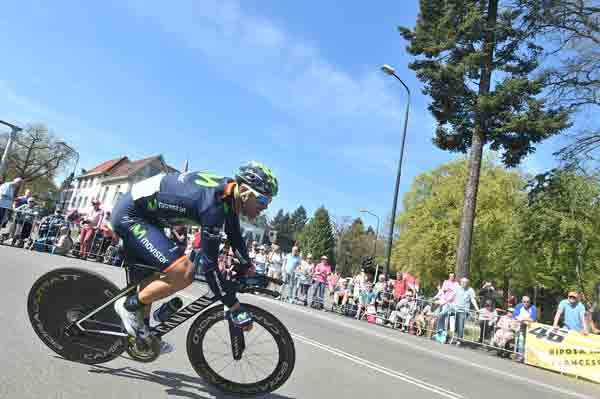 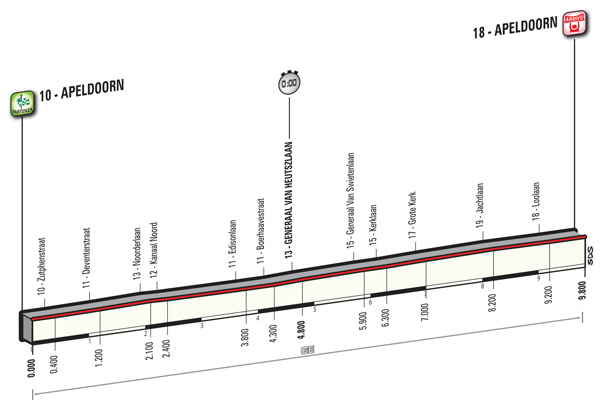 ROUTE
Stage 1 – Apeldoorn (Individual Time Trial) 9.8km
This Individual Time Trial runs through the town centre along wide, straight avenues with a few 90-degree bends. Street furniture including speed bumps, roundabouts will be found throughout the route. Split time is taken at km 4.8. 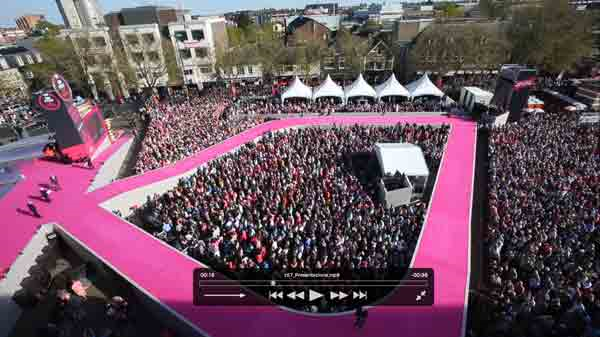 POINTS OF INTEREST
APELDOORN – km 0
The route runs entirely through Apeldoorn, a charming city in the province of Gelderland, with a population of 160,000. Close to its distinctive centre lies the 150-hectare Hoge Veluwe National Park, the largest conservation area in the Netherlands, where stags, mouflons and many other wild animals live. The park is also home to the Kröller-Müller Art Museum, which hosts a valuable and considerable collection of paintings by the great Dutch painters Vincent van Gogh and Piet Mondriaan and by Pablo Picasso. Visitors can explore the park’s pathways using one of the 1,700 white bicycles provided free of charge.
The start zone is set in the Omnisportcentrum. Opened in 2008 the complex hosts an indoor velodrome with a capacity of over 5,500 spectators along with many other sporting facilities and venues for different events, such as concerts and exhibitions.
The route passes through the heart of the town, with long, straight roads and runs along the Kanaal Noord (52km) which flows from Hattem to Dieren, and into the IJssel River. The stage course then crosses the Deventerstraat bridge and runs along the other side of the channel.

APELDOORN LOOLAAN – km 9.8
The route ultimately reaches the finish in Loolaan. Apeldoorn is an important historic city. The magnificent Het Loo Palace was a summer residence of the Royal Family. The castle was built starting in 1648, as commissioned by William III of Orange and his wife, Mary II Stuart, Queen of England. It is one of the major Dutch Baroque buildings, built drawing inspiration from the Palace of Versailles. It now houses a national museum, hosting valuable historical objects, art and collectors’ items.

Major landmarks also include the elegant, distinctive and modern structure of the Orpheus Theater, with different venues to host cultural events. Notable sights also include the Oranje Park, the modern, distinctive City Hall building, and the magnificent, grandiose cathedral – or Grote Kerk in Dutch – and bell tower.

The city is rich in parks, gardens and venues for leisure and cultural activities, such as the Drakenbootfestival, an event featuring boat races at the Channel each June.

Leisure and learning combine at the Apenheul Primate Park. Younger children will love the Julianatoren Amusement Park, while other venues for social gatherings or leisure make Apeldoorn a major domestic and foreign tourist destination that can easily be visited by bicycle, just as the residents do. 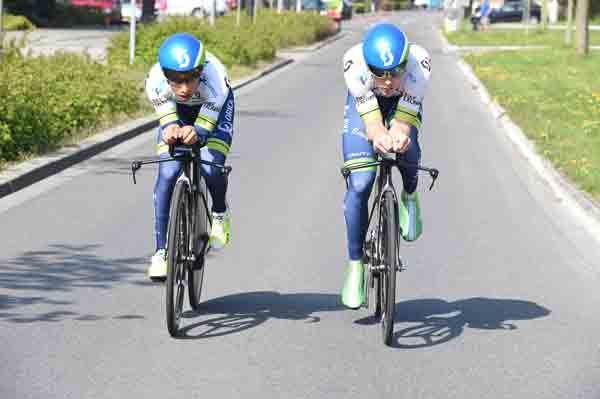 JERSEY AND TIME BONUS NOTES
Maglia Rosa (pink), General Classification, sponsored by Enel, and Maglia Bianca (white), Young Rider Classification (born after 1/1/1991), sponsored by Eurospin.
Time bonuses: Intermediate Sprints: 3″, 2″ e 1″ at 1st, 2nd and 3rd classified. Finish line: 10″, 6″ and 4″ at 1st, 2nd and 3rd classified. Time trial stages (1, 9 and 15) don’t have time bonuses. In each other stage there will be one intermediate sprint awarding time bonuses each and a maximum possible 13 seconds of time bonuses. The maximum possible time bonuses for the whole race is 234 seconds.

Maglia Rossa (red), general individual classification by points leader, sponsored by Algida.
Stages are divided into categories, according to each category different points will be awarded:

Maglia Azzurra (blue), King of the Mountains classification leader, sponsored by Banca Mediolanum.
NOTES: According to each climb category, different points will be awarded. Here is the list of Giro’s climbs and how many points they award:

The maximum possible mountain points for the whole race is 504.

TV COVERAGE
TV coverage of the 99th Giro d’Italia will reach all four corners of the world: 184 countries will see the Corsa Rosa on 29 different networks, 24 of them live.

ITALY
RAI – Radio Televisione Italiana, the longstanding host broadcaster, will guarantee extensive coverage of the Corsa Rosa. The action will be presented live in three separate programmes: “Prima diretta” („Pre-Live“) on Rai Sport 1, “Giro in diretta” („Giro Live“) at 15:10 – 16:15 in simulcast on Rai 3 and Rai HD, and “Giro all’arrivo” („Giro on the Finish Line“), showing the last hour of racing until 17:15. The traditional post-race analysis programme „Processo alla Tappa“ („The Stage on Trial“) ends at 18:00.
When the race reaches Italy, the stage start will be covered in Rai Sport 1’s „Giro Mattina“ („Giro Morning“), showing the signing in ceremony, with interviews, the start of racing, and local colour. The strand „Journey through the Italy of the Giro d’Italia“ will show historical and cultural anecdotes and features.
For viewers unable to watch the stage live in the afternoon, the evening show TGiro („Giro Bulletin“) will tell the story of the day’s racing from 20:00 on Rai Sport 1, followed by Giro Notte („Late Night Giro“), with 90’ of stage highlights from 22:45 on Rai Sport 2. The Corsa Rosa will be streamed on the website www.rai.tv.

AROUND THE WORLD
In Italy the Giro can also be seen live on Eurosport, broadcasting to 53 countries across Europe from 14:15, with race commentary in 19 languages.
In France, the stages will be shown live exclusively on beINSports, with reports and features from the scene.
The Dutch public broadcaster NOS will be showing three hours of live racing of the first three stages in the Netherlands, as well as the final 90 minutes of the weekend stages in Italy, plus daily highlights of every stage.
Free to air race coverage can be seen live in Flemish via VRT, in Danish on TV2 Denmark, in Switzerland via SRG SSR, in Spain via Teledeporte and EITB and in Kazakhstan via highlights on Kaz Sports.
The Corsa Rosa will be shown in Latin America live on ESPN, with Portuguese commentary in Brazil, English commentary in the Caribbean and Spanish across the rest of South America. Colombian fans have a wide range of options, with live coverage on RCN and Señal Colombia. TDN is showing the race live in Mexico and Central America. beIN Sports will cover the Giro in the United States of America and RDS will provide French-language coverage in Canada.
The Giro d’Italia will also appear on the small screen in the Middle East and North Africa thanks to live coverage on beIN Sports, while in South Africa and Sub-Saharan Africa the Giro will appear on the Supersport channels.
In Asia, the Corsa Rosa will be shown in 16 countries via Eurosport Asia Pacific; J Sports will cover the race live and exclusive in Japan. LeTV will do the same in China.
Race highlights will be shown on FPT Telecom in Vietnam, while the Thai public will be able to enjoy the key parts of the stage on both True Visions and NOW26.
The huge interest that Australia has shown in the Giro continues in 2016: SBS will show all 21 stage live, while Fox Sports will show highlights. In New Zealand, Sky is showing the race live and in highlights.
Finally, the Corsa Rosa will be shown worldwide via SNTV – Sports News Television and Sport24, the 24 hour sports channel for airline and cruise ship passengers.