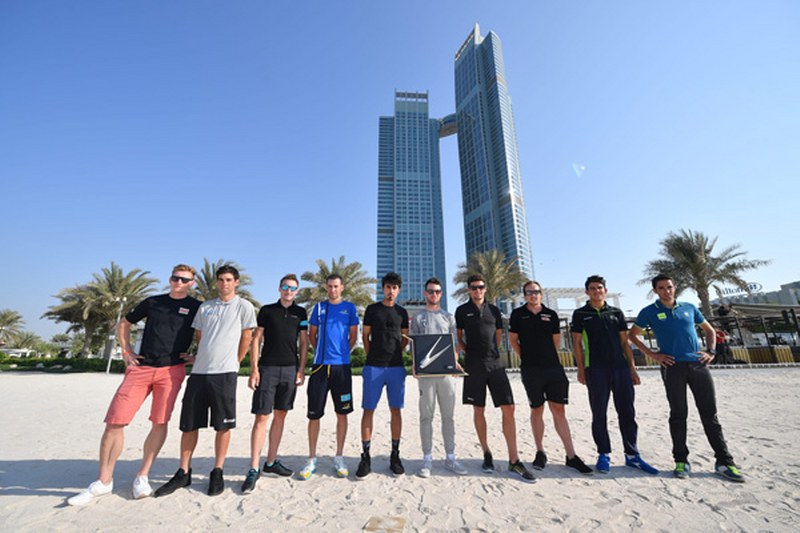 Before the press conference, the attending riders took time to have a photo session on the beach in front of Nation Towers in Abu Dhabi. You can download the pictures from the link below. 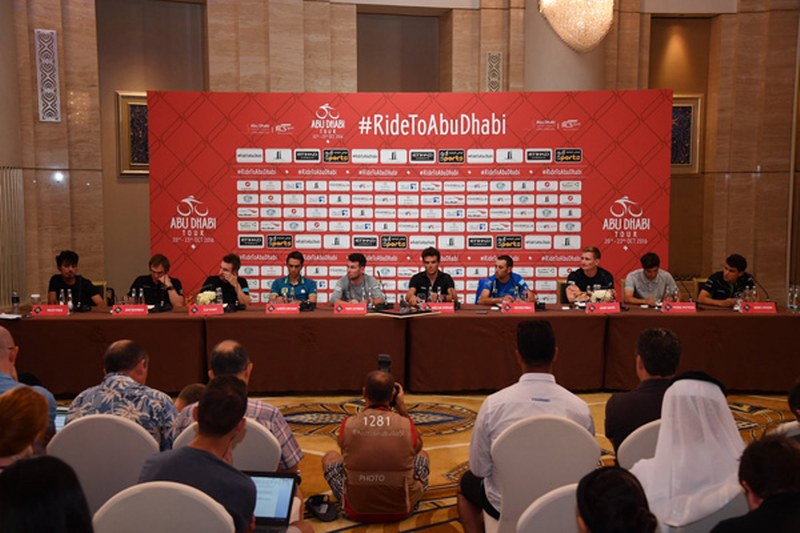 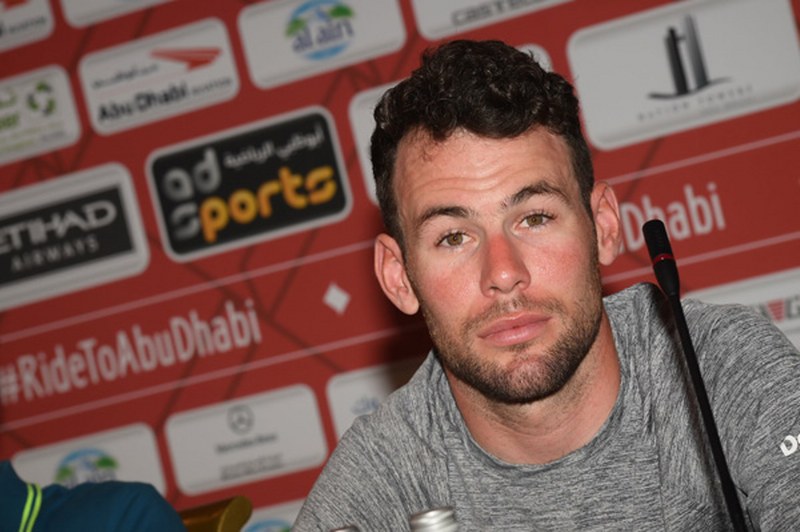 1) Mark Cavendish (British Isles – Team Dimension Data) Abu Dhabi Tour Official Ambassador
The world’s most successful sprinter ever and 2011 UCI Road World Champion Mark Cavendish, 31, added four Tour de France stage victories this year to his account to make it 30 up to date, only four down on all-tine record holder Eddy Merckx. A points classification winner in all three Grand Tours, he also wore the yellow jersey for the first time this year and claimed his first ever Olympic medal with the silver in the omnium track race, before finishing second at the UCI Road World Championships – just a bike’s length away from reclaiming his title.
Cavendish said: „I’m proud to be the ambassador of the Abu Dhabi Tour, and event that has incredible sponsors and a great future, being elevated to one of the pinnacle races in cycling already for next year. The caliber of riders here is similar to the Tour de France.“ 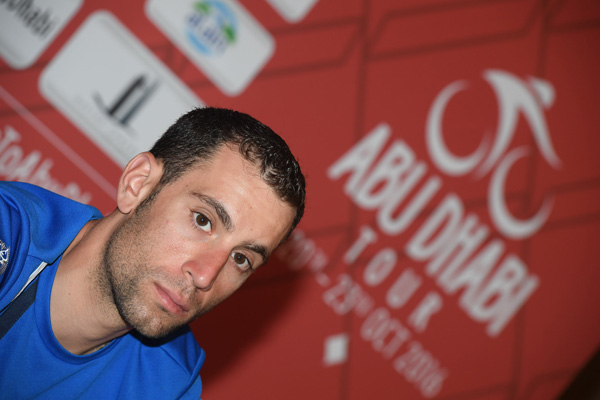 2) Vincenzo Nibali (ITA – Astana Pro Team)
Vincenzo Nibali, 31, nicknamed “The Shark”, was already one of the six riders who won all three Grand Tours (France, Italy, Spain) in the history of cycling before he won the Giro d’Italia once again this year, as well as the Tour of Oman.
Nibali said: „Abu Dhabi is a fantastic location with a great hotel to host us. This is only my third race after my accident at the Olympics, following the Tre Valli Varesine and the Tour of Almaty. I’m looking to regain good race condition.“ 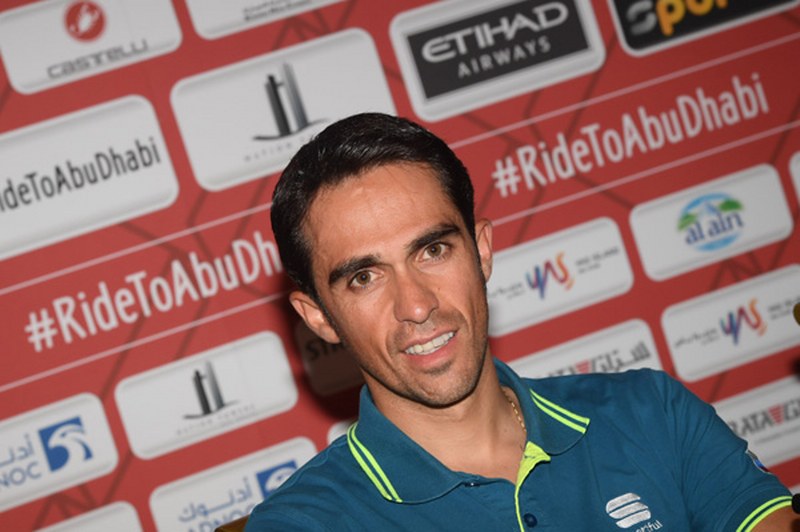 3) Alberto Contador Velasco (ESP – Tinkoff)
With seven overall Grand Tour victories (Tour de France 2007 and 2009, Giro d’Italia 2008 and 2015, Vuelta a Espana 2008, 2012 and 2014), Alberto Contador, 33, is a legend of his own lifetime. He won the Vuelta al Pais Vasco and the Vuelta a Burgos this year.
Contador said: „I’m happy to be here at the Abu Dhabi Tour as our team is motivated for the flat stages and possibly for the mountain with Jesper [Hansen].“ 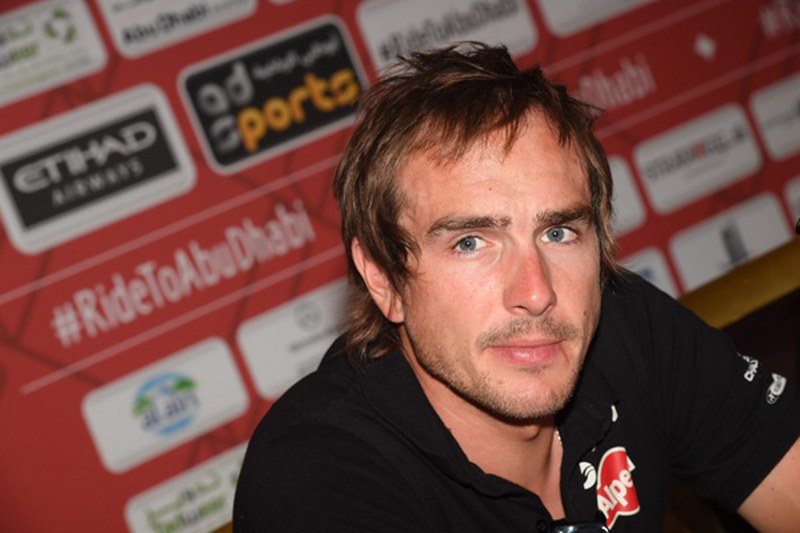 4) John Degenkolb (GER – Team Giant-Alpecin)
A winner of two monuments, Milan-Sanremo and Paris-Roubaix, in 2015, John Degenkolb, 27, suffered a life threatening accident while training in Spain in January, yet has has bounced back to excellent fitness and form with two victories in 2016, at the Arctic Race of Norway and the Münsterland Giro in Germany.
Degenkolb said: „As I started the season later than usual due to the accident, I’m still motivated, especially because this is my last race with my friends from Giant-Alpecin.“ 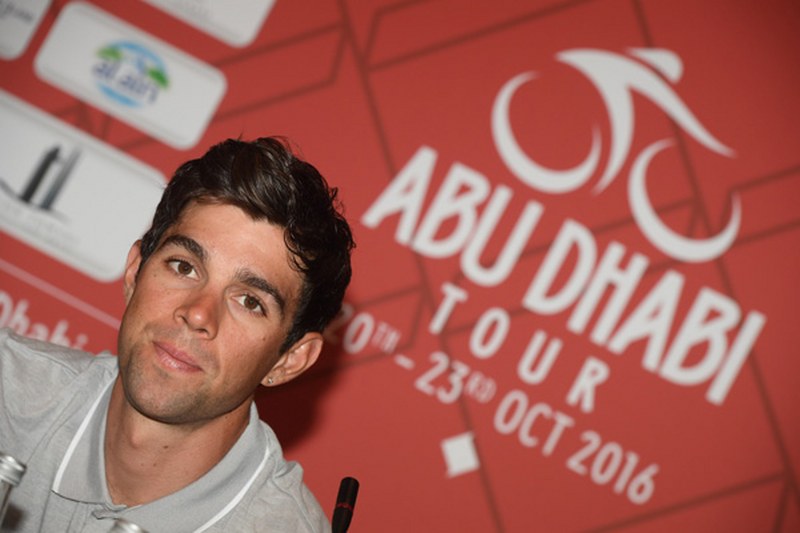 5) Michael Matthews (AUS – Orica BikeExchange)
Michael Matthews, 26, who was already a multiple stage winner at the Giro d’Italia and the Vuelta a Espana, put a Tour de France stage victory under his belt this year, and shows great late-season form, finishing fourth at the UCI Road World Championship in Doha.
Matthews said: „I will definitely enjoy the Abu Dhabi Tour more than last year, as I’m more used to the weather after having prepared for the World Championships in Qatar – so I expect my performances to be better.“ 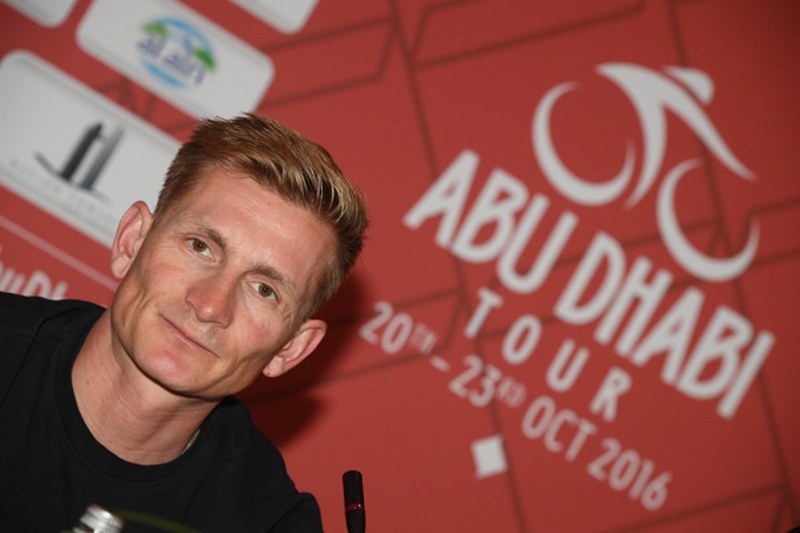 6) André Greipel (GER – Lotto Soudal)
André Greipel, 34, is the winner of the prestigious conclusive stage of the Tour de France on the Champs-Elysées for the second straight year. With 21 stage victories in all three Grand Tours combined, “The Gorilla” is undoubtedly one of the best sprinters of his era.
Greipel said: „Our team has a bit of lack of a lead-out, but I’ll try to put myself into other lead-outs and we’ll find out how well it can work.“ 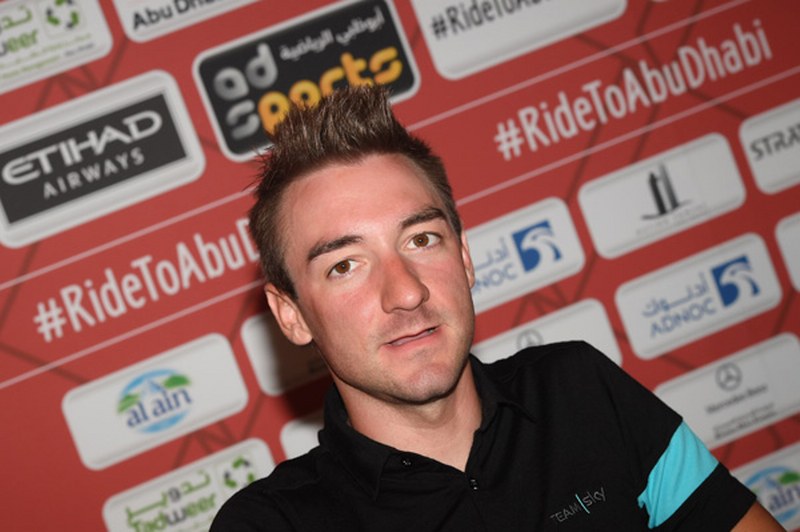 7)Elia Viviani (ITA – Team Sky)
The 2016 Rio Olympics Omnium champion Elia Viviani, 27, is one of the stars of the 2016 season as well as a double stage winner of the inaugural edition of the Abu Dhabi Tour in 2015. Viviani has won stages at the last two Dubai Tours, among many other stage races.
Viviani said: „I have fond memories of my two stage victories here last year. I haven’t won any road races since March but we have a very strong lead out here and Nicolas Roche is also very motivated for the overall.“ 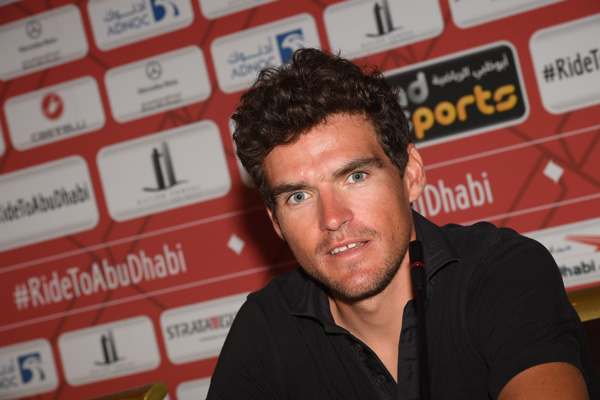 8) Greg Van Avermaet (BEL – BMC Racing Team)
Greg Van Avermaet has come of age at 31, compiling prestigious victories at Tirreno-Adriatico (overall ranking), stage 5 of the Tour de France – wearing the yellow jersey for three days – and victory in the Rio Olympics Road Race before winning September’s WorldTour event Grand Prix Cycliste de Montréal.
Van Avermaet said: „It might not be the best parcours for me, but I’m delighted to race here on my golden bike as the Olympic Road Race champion. I’ll make it difficult for other riders to win and I want to finish this great season on a high note.“ 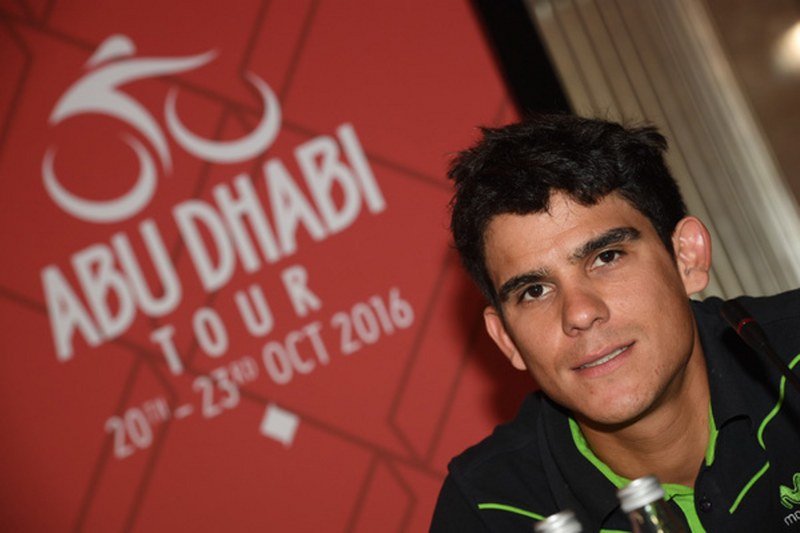 9) Andrey Amador (CR – Movistar Team)
30-year-old Andrey Amador Bikkazakova is the only Central American cyclist in the WorldTour. The Costa Rican has showed his true quality best in the Giro d’Italia in which he won a stage in 2012, finished fourth overall in 2015 and wore the Maglia Rosa for one day this year.
Amador said: „I’m truly happy to be here with Movistar. As the four-time WorldTour champion team, we had a great celebration last night. It’s great to see the support cycling receives in this part of the world.“ 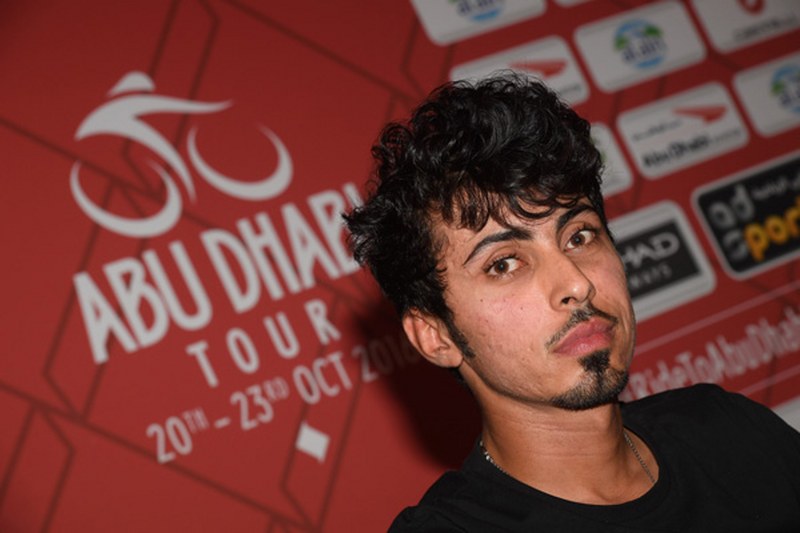 10) Yousif Mirza (UAE – Nasr Dubai)
Yousif Mohamed Ahmed Mirza Al-Hammadi, 28, represented the United Arab Emirates at the Olympic Road Race in Rio after he claimed the silver medal at the 2015 Asian Cycling Championship. He’s a four-time and reigning UAE Road Race champion.
Mirza said: „The experience of riding the Olympics was amazing. Now the Abu Dhabi Tour will show that we have strong cycling in the UAE.“ 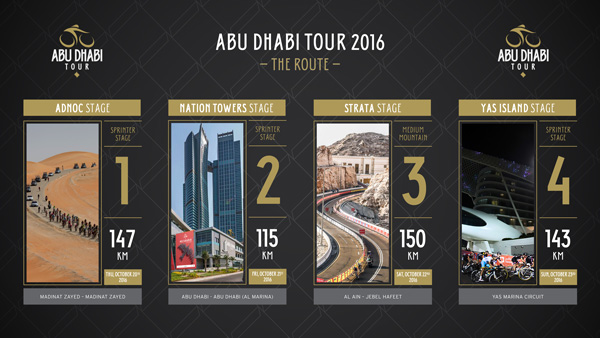 Abu Dhabi Tour Media Kit
From the official online pressroom the media can download high resolution pictures of the 2016 race, the various press conferences, the opening ceremony and the UCI Cycling Gala. The photos are free of charge for editorial use, as long as both the Abu Dhabi Tour and the photographer’s name is quoted.