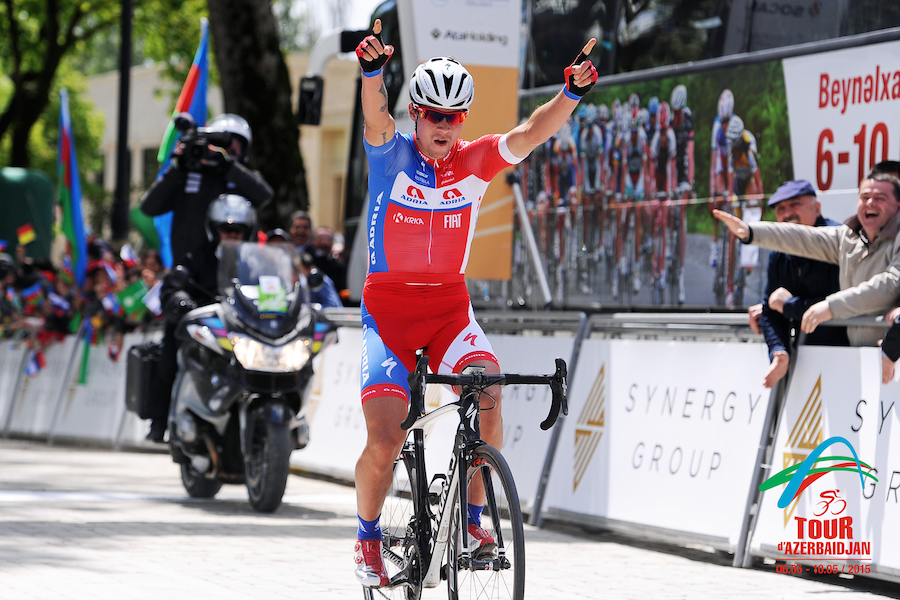 Ismayilli, 7 May 2015 – Primoz Roglic soloed in to victory on the queen stage of the Tour d’Azerbaidjan, claiming the second consecutive stage win for his Adria Mobil team. Second place went to Matej Mugerli (Synergy Baku Cycling Project) and third to Christopher Horner (Airgas-Safeway).

Roglic, who won this same stage in 2014, had been part of a break group which formed just before the first of three climbs on this second stage.The group eventually went from 16 riders to two, with Roglic dropping Mugerli on the final climb, ranked Cat. 1.

It was another overcast day, as the peloton left from the VeloPark in Baku and took off on the 187 kilometer Queen Stage to Ismayilli. There were multiple attempts to form break groups, but none of the early ones was successful.

The first intermediate sprint was dominated by the Synergy Baku Cycling Project, with the points going to their Maksym Averin and Alex Surutkovych, followed by Frantisek Sisr (Team Dukia Praha).

Shortly thereafter the day’s break group finally formed, a large one of 16 riders, including Chris Horner (Airgas-Safeway). The first ranked climb followed soon, with the first over being Synergy Baku’s Surutkovych. He repeated that feat at the second climb, also cat. 2.

The hard course took its toll and both the peloton and the lead group had shredded. With 35 km to go, Matej Mugerli (Synergy Baku) and Primoz Roglic (Adria Mobil) were alone in front, with Roglic eventually shedding his rival. Mugerli fell back into a chase group with Horner and Jasper Ockeloen (Parkhotel Valkenburg CT).

Roglic just kept pulling away, also claiming the last mountain title for himself. He finally sailed over the cobbled streets of Ismayilli to take the win.

Shortly after every stage, you can download photos and yesterday’s summary of Eurosport from our Press Center. Copyright Stiehl Photography.

Primoz Roglic (Adria Mobil, 1st place and leader in GC and GPM)
„I tried to get away on the last climb, that happened and then I hold on till the finish line. This win means a lot for me, it’s nice to win again after last year. I’m really happy. Of course we will try to keep the jersey till the end of this Tour d’Azerbaidjan, but there are some hard stages coming up. But I hope to keep it.“

Matej Mugerli (Baku Cycling Project, 2nd place)
“My team, the Baku Cycling Project, did everything for me to succeed. We were in a breakaway with three guys of our team. In the final I went to the finish behind Roglic with Chris Horner and Ockeloen of Team Parkhotel Valkenburg and we changed regular. At the finish I won the sprint and became second, but the Tour is not over yet.”

Chris Horner (Airgas-Safeway Cycling Team, 3rd place)
“It was beautiful course and a hard race. When the break established I jumped away with the breakaway and I knew for sure that we would stand till the finish. It was a very nice race. Our team had just one day rest between this race and our previous one and I’m happy that my legs are still good.”

Maksym Averin (Synergy Baku Cycling Project, leader in Points)
„It was our goal to get the points jersey again and we’ll try to keep it till the end. I missed the breakaway today, but I won the sprint of the bunch. I was more happy with yesterday’s third place, but I’m also happy that we still have the green jersey.”