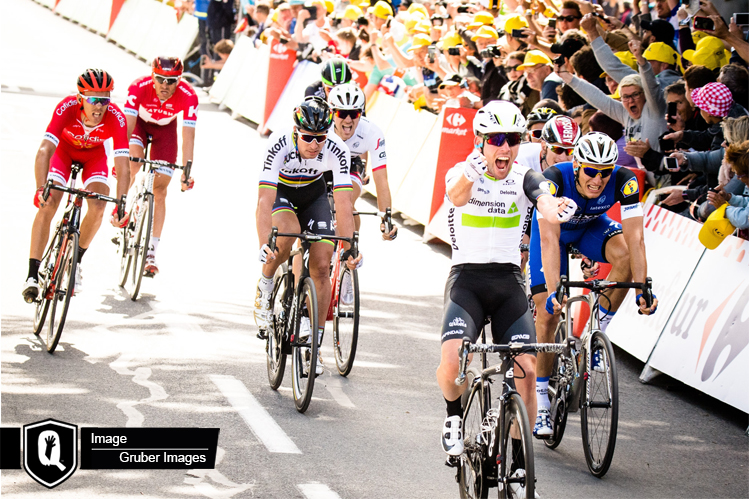 Team Dimension Data for Qhubeka sprinter places Qhubeka under world stage spotlight
The opening stage of the 103rd Tour de France came down to a bunch sprint in Utah Beach and Mark Cavendish gave Team Dimension Data for Qhubeka an incredible stage victory and also secured his, and our African Team’s, first ever yellow jersey of the Tour de France.

Starting in Mont-Saint-Michel, Team Dimension Data for Qhubeka had a clear plan of delivering Cavendish to the sprint finale with the hope of taking the stage victory and the yellow jersey. The 188km stage to Utah Beach suited the sprinters perfectly and so the 5 rider breakaway that did go clear early on, had zero chance of making it to the finish first.

Etixx-Quickstep and Lotto-Soudal did the lion’s share of the pace making from the peloton while Team Dimension Data for Qhubeka rode near the front, out of trouble, during a nervy stage which saw a number of crashes and splits in the peloton caused by crosswinds. With 5km to go, the race was all together and our African Team started to put our stage plan into action.

Moving up the left side of the peloton, Bernhard Eisel led Reinardt Janse van Rensburg, Edvald Boasson Hagen, Mark Renshaw and Mark Cavendish to the head of the bunch. Our African Team was shoulder to shoulder with the Belgian Etixx squad, as they had the stage favourite, Marcel Kittel, at the rear of their train.

After two powerful turns by Janse van Rensburg and Boasson Hagen respectively, our African Team edged ahead as Renshaw led under the 1 kilometer to go sign. Cavendish waited in the wheel of Kittel who had to start sprinting early, before our Manxman burst out of the German’s slipstream with 200m to go, to take a historical victory. 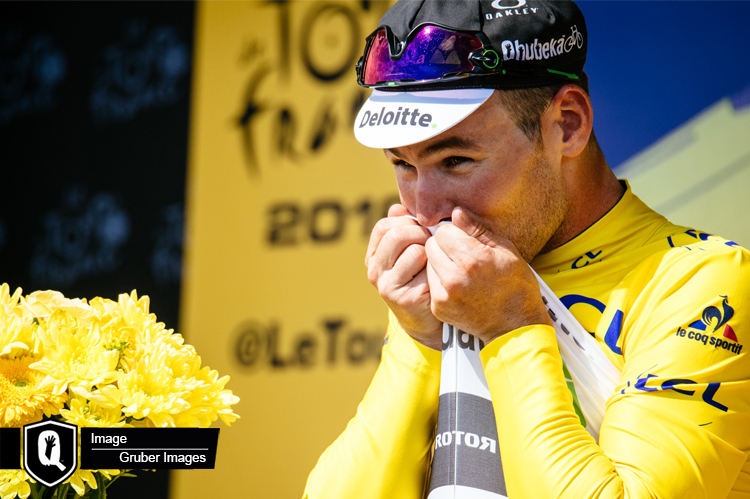 Mark Cavendish – Rider
This is a very special win. It is the first time I have had the honour of wearing the yellow jersey. What a special moment to do it, with such special people. Three of my last guys, Edvald, Mark and Bernie were guys that have been with me my whole career and to have Reinardt Janse van Rensburg pulling full on for me in the final, it was super emotional for me. In this team, we race for more than just our sponsors, we race to raise the profile of the Qhubeka charity and to put 5000 kids on bicycles. There is no better way to do that than to wear the most iconic symbol in cycling and that’s the yellow jersey. I am very, very happy.

Douglas Ryder – Team Principle
A Tour de France win, our first stage this year, our first yellow jersey, our first year in the World Tour with a new sponsor, this is just unbelievable for this team. The team has an x-factor because it’s got everything going for it at the moment. It has a social cause that everybody really cares about and that the riders believe in. For all the riders to work like they did today, to commit to one objective and one goal and then to pull it off, it is sensational. To wear our first yellow jersey in our second Tour de France and win the first stage, after an incredible start to the season where we had a hugely successful Dauphine, this is an amazing moment for this team. It is amazing for our new partners and for that group came, Bernie, Renshaw and Cavendish, it is incredible how they have integrated with our African riders to make this a special moment for this team and for African cycling.