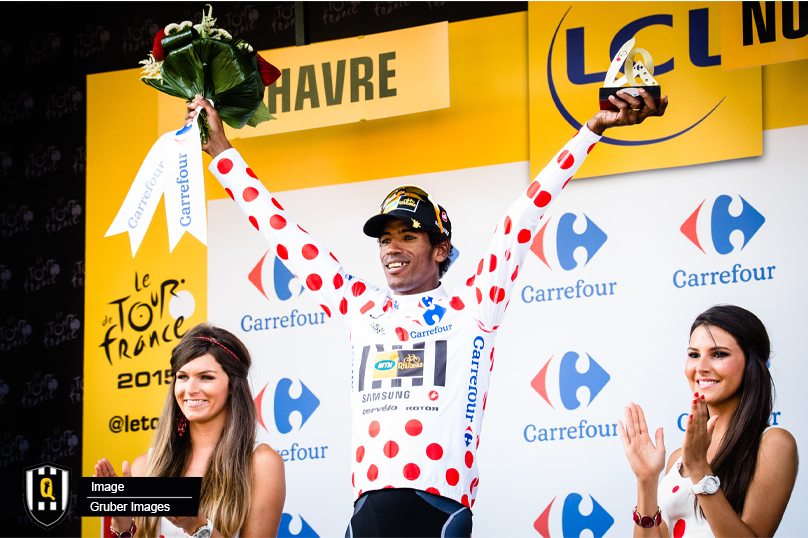 For MTN-Qhubeka p/b Samsung it was another terrific day as Daniel Teklehaimanot got to start the stage in the Polka Dot jersey he earned yesterday. With a category 4 climb coming just 12km into today’s stage, Daniel was keen to show off his new jersey in the break as he looked to further his lead in the King of the Mountians competition. Daniel was successful in his task and got into a 5 rider move inside the first 5km.

Daniel would comfortably take the single point on offer at the top of the Cote de Canapville. Initially the team plan was for Daniel to secure the point and then return to the peloton but with sky high confidence at the moment, Daniel chose to push on in the breakaway for the day. With not many sprinters stages in this year’s Tour, the teams of the fast men did not want to risk their chance today and kept the break on a short leash.

After hovering just above the 2 minute mark for most of the day, the break eventually had to give in to the peloton with 10km to go. Reinardt Janse van Rensburg and Tyler Farrar were both up for the mass sprint as they went shoulder to shoulder with the World Tour sprint trains. Tyler was looking really good until he lost some momentum when narrowly avoiding a touch wheels with Greipel at 200m to go. The American was able to hold on for 7th though while his South African teammate Reinardt finished with good speed on the outside to collect 8th as well for our African team.

Having two riders in the top 10 and with Serge Pauwels in 29th, our results were good enough to see MTN-Qhubeka p/b Samsung winning the best team for the stage today.

Daniel Teklehaimanot – Rider
It was a great moment to start in the jersey this morning. We obviously had a plan with the early categorised climb today so that’s why our team was in front to keep things under control before the start. It was good though that I could get away early and then won the point. I wanted to keep going and wasn’t worried about saving power for the next weeks because I am feeling strong. Every day we can spend in the jersey helps our 5000 bikes campaign so I will work for it each stage.

Qhubeka is an Nguni word that means “to progress”, “to move forward”. Qhubeka (qhubeka.org) is World Bicycle Relief’s program in South Africa. World Bicycle Relief (worldbicyclerelief.org) is a global non-profit organization dedicated to advancing education, health and economic opportunities by providing simple, sustainable transportation. Since World Bicycle Relief’s founding in 2005, it has delivered more than 220,000 specially designed, locally assembled bicycles to people in need. To contribute to the #BicyclesChangeLives Campaign, click here.

MTN (mtn.co.za) is a long-time supporter of Qhubeka and the team. Launched in 1994, the MTN Group is a leading emerging market operator, connecting 219.2 million subscribers in 22 countries in Africa, Asia and the Middle East.