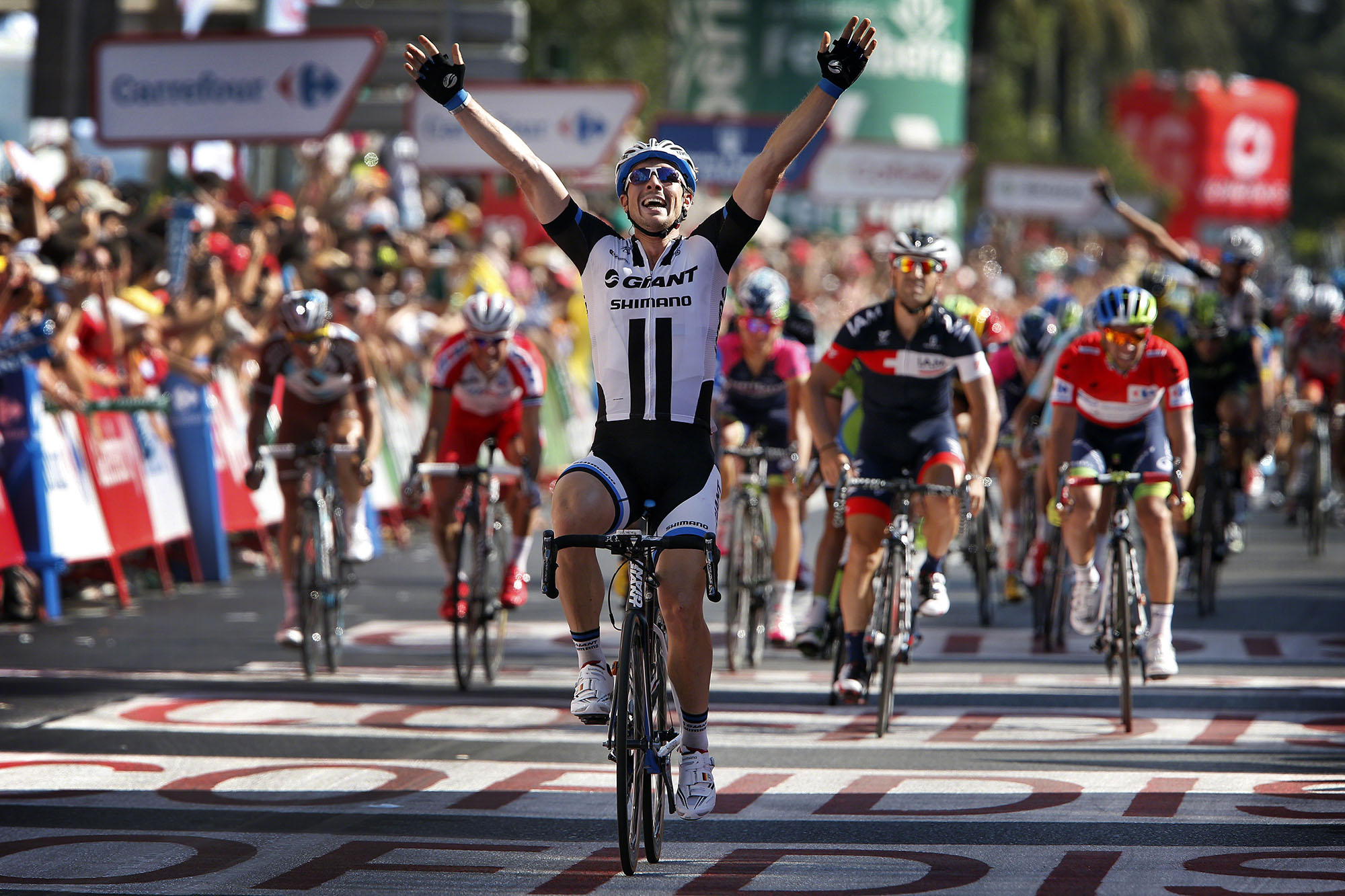 Foto via Team Giant
John Degenkolb has sprinted to an emphatic victory on stage four of the Vuelta a España today into Córdoba, completing the team’s second year of a hat trick of wins in all three Grand Tours of this season, and making it the seventh Grand Tour in a row where the team have won a stage.

John dug deep to make it over the day’s main climb, a second category ascent in the final 30 kilometres, while other sprinters dropped off the pace. At the finish he was privy to a strong lead-out from Chad Haga, putting him in a perfect position to finish off the job in style.

The stage started under much more normal circumstances that yesterday’s aircraft carrier roll out, but once again the day’s break didn’t take long to get going with the majority of the peloton more occupied with the oppressively high temperatures.

Four riders pulled clear and set about building their advantage, but they weren’t allowed much room. The pace was controlled for the first part of the stage before the race hit the day’s first climb after just over 100km in the saddle. From here on the pace was on, and with the mercury hitting over 40 degrees keeping cool and hydrated was nearly as hard as the racing.

Team Giant-Shimano rallied around both John and Warren Barguil, with riders making sure they were well hydrated, in position, and even keeping everyone cool with the use of ice socks. The decisive point of the stage was, as expected, the final climb of the day, a second category ascent that crested with just under 30km to race.

The pace was hard but with the help of the team John was able to stay well positioned and he kept fighting all the way over the top of the climb to stay in contact and make the select front group down the other side.

John had Warren together with the team’s two Texans, Lawson Craddock and birthday boy Chad Haga for company and they set about positioning him and keeping the front group together for the sprint which, which John opened up his effort was always going one way.

Warren also continued to climb the general classification after today’s stage, moving up a further two places to 14th.
Reaction

“It was like riding in a sauna today, it was impossible to get enough drink and ice,” John told us after returning to the team hotel. “The team were great firstly before the climb in helping with this then after in positioning me and chasing the attacks. Birthday boy Chad especially did a fabulous job and it’s nice to make him a birthday present.

“It’s a long time since my last win, I counted last night and it’s a lot of second places since winning Gent Wevelgem so it’s a big relief to be back winning.”

“It was fairly easy today until the first climb of the day where it got really hot and hard, and the pace never let up,” said birthday boy Chad. ”When we hit the final climb it was full gas. We were working hard to keep John and Warren at the front as we knew it would explode.

“We ended up getting over the top and down the bottom with four of us in the front group and from there it was about doing what we had to do.

“It is great to be here and to learn at a Grand Tour – I just keep getting goose bumps thinking about being part of a stage win like this.”

Coach Christian Guiberteau added: ”That was a really big performance from John and the team to get over the climb today. We knew it would be tough but made a plan to go for it.

“Having Lawson and Chad together with Warren with John at the finish put us in a strong position. The whole team did a great job all day in supporting both John and Warren and it paid off.”