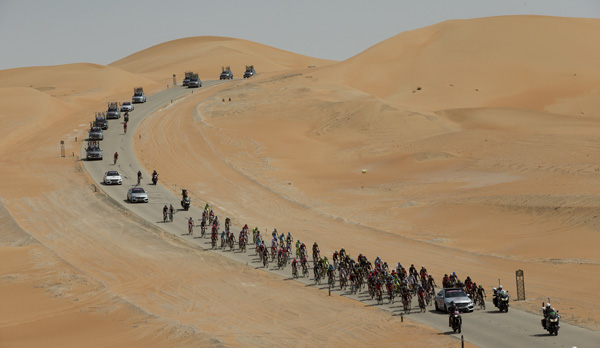 Abu Dhabi, 17 October 2016 – Following the UCI Road World Championship brilliantly won by Peter Sagan in Doha so narrowly ahead of Abu Dhabi Tour Official Ambassador Mark Cavendish, a great week of cycling is expected in the United Arab Emirates with the second edition of the UCI Cycling Gala and the second Abu Dhabi Tour just around the corner.

A special event to celebrate the end of the UCI professional road cycling season and its stakeholders, the UCI Cycling Gala will take place in the evening of 18 October at St-Regis Abu Dhabi in the presence of Peter Sagan and other big names.

The Abu Dhabi Tour features three stages likely to favour the sprinters and one uphill finish with a spectacular grand finale on the Yas Marina motor racing circuit on Sunday night. The event will be part of the UCI WorldTour from 2017 onwards.

ROUTE INFORMATION
Stage 1 – ADNOC STAGE / MADINAT ZAYED – MADINAT ZAYED (147KM)
Stage
The first stage runs entirely into the desert, with the first and last parts of about 45km on straight, wide roads. Once in Liwa, first Intermediate Sprint riders will find a short circuit characterised by constant undulations over dunes, adding up to a significant total elevation. After a second Intermediate Sprint passage in Liwa, the second part of the stage takes the riders to Madinat Zayed, where the stage will finish.
Last km
A city path with only three proper bends, one to the right and two to the left (the final bend being to the left). The last kms are on wide, straight boulevards, punctuated by wide-curved roundabouts. The final km is straight on asphalt.

Stage 2 – NATION TOWERS STAGE / ABU DHABI – ABU DHABI (Al Marina) (115KM)
Stage
The second stage is mostly in the city. After the start, the peloton will travel on wide roads towards the Sheikh Zayed Grand Mosque, and then towards Yas Island with a passage through Khalifa City, where there are several roundabouts and speed humps. After the Yas Island first Intermediate Sprint, the race goes to the Sheikh Zayed bin Highway towards Abu Dhabi Corniche. It follows a route within Reem Island – including the second Intermediate Sprint – then returns to the Corniche finish line. The entire route is on wide boulevards with road furniture constantly dividing the lanes.
Last km
The final 5km are on increasingly large roads with large semi-curves leading to the straight finish on asphalt.

Stage 3 – STRATA STAGE / AL AIN – JEBEL HAFEET (150KM)
Stage
The third stage comprises both urban surroundings and mountains. The first part, inside Al Ain city, is all on wide roads with roundabouts and speed humps and is followed by a second part in the desert along wide and predominantly straight roads. At 15km to go, the route starts to rise slightly towards the final ascent, culminating in an uphill finish at an altitude of 1025m, following an 11km climb featuring slopes with an 11% gradient.
Last km
The final climb is on wide-ranging bends on a three-lane roadway. The gradient is mostly around 8-9% with a peak of 11% at 3km to go. There are short descents in the last kilometres before the final ramp with a straight finish on asphalt.

Stage 4 – YAS ISLAND STAGE / YAS MARINA CIRCUIT (143KM)
Stage
The final stage is entirely on Yas Island. There are 26 laps on the Yas Marina Circuit, each of 5.5km with three Intermediate Sprints as we count down to the finale. The first Intermediate Sprint is at lap 11, with 15 laps to go; the second at 10 laps to go and the last Intermediate Sprints with just five laps to go. Last year during the Yas Island Stage, for the first time ever in a men’s professional road race, live on-board bike camera footage was made available and used for live television race coverage.
Last km
On the perfect tarmac of a 5.5km race circuit with wide roads and large, sweeping bends. The final 250 metres are on straight, flat asphalt.

#UCICyclingGala
The second edition of the UCI Cycling Gala, an event conceived to celebrate the end of the UCI professional road cycling season and its stakeholders, will take place in the evening of 18 October. The event will be produced by Abu Dhabi Sports Council in collaboration with RCS Sport, in the presence of biggest names in professional men’s and women’s road cycling, UCI Management Committee members, representatives of national federations, international media and all the athletes that will take part to the upcoming Abu Dhabi Tour: during the evening the UCI Cycling Gala will also feature the official Team Presentation of the Abu Dhabi Tour. The following day (19 October), race preliminary operations and Top Rider press conference are scheduled.

Abu Dhabi Tour Media Kit
From the official online pressroom the media can download high resolution pictures of the 2016 race, the various press conferences, the opening ceremony and the final evening which was dedicated to the very first UCI Cycling Gala. In order to download the pictures, just go to http://pressroom.rcssport.it/ (username: press / password: press), select “Scarica contenuti/Download contents” on the top right, choose “2015” from the menu on the left, then “Ciclismo”, and then “Abu Dhabi Tour”. The photos are free of charge for editorial use, as long as both the Abu Dhabi Tour and the photographer’s name is quoted. In addition to the photos, the official promo video is available for the same purposes. The clip is free of charge for editorial use exclusively on internet, as long as Abu Dhabi Tour is accredited. Here is the link.