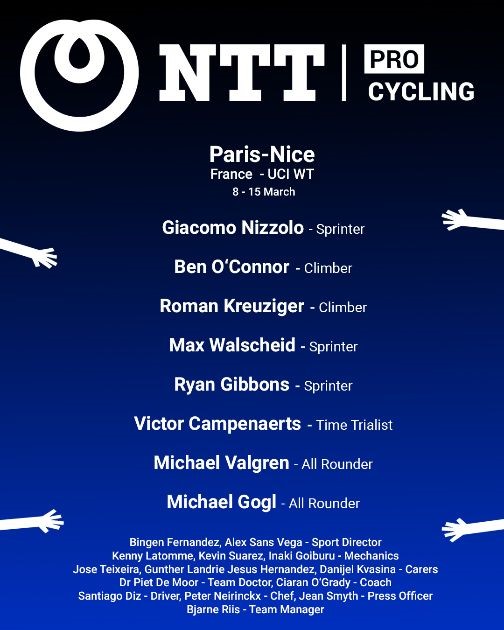 The 2020 ‘Race to the Sun’ gets underway on Sunday in Paris and we are delighted to confirm our roster to take part in the event, which has been expanded to eight-rider teams by the organisers.
Our selection is highlighted by the inclusion of time trial specialist Victor Campenaerts and some of the pre-race focus will immediately be on stage four’s 15.1km route, as he makes his debut in the discipline for NTT Pro Cycling. It’s a stage the 28-year-old Belgian has labelled a “big opportunity” for himself and the team.
The opening 154km stage, starting and finishing in Plaisir, is likely to be one for the fast men, along with stages two and three, and in a stacked bunch of sprinters slated to start, our selection features the trio of Giacomo Nizzolo, Ryan Gibbons and Max Welscheid.
All three have tasted success in 2020 with the Italian winning a stage at the Tour Down Under, Gibbons being crowned the South African road race champion and Weslcheid winning two stages at the Tour de Langkawi as well as claiming the overall points jersey.
While the second half of the race heads south for Nice and where the climbers in the bunch will take over in the fight for the general classification. To that end, Ben O’Connor and Roman Kreuziger come into their own and will be looking to test their early-season form.
Completing our selection is the exciting and experienced duo of Michael Valgren and Michael Gogl; both have been building steadily in the early season and were strong at the recently completed “Opening Weekend” in Belgium. This race forms a crucial part of their season and preparation for some of the challenges that lie ahead.

Victor Campenaerts
I’m really looking forward to Paris-Nice; the time trial is very suited to me and I can’t wait race on my BMC time trial bike with disc brakes.

They will be such an advantage on this parcours because you have a number of corners coming out of a descent, and it’s such a big advantage to be able to brake that much later. A lot of teams have disc brakes already on their time trial bikes but it’s still less than 50% of the peloton, so it’s super-cool to have that edge.
Also, with the first few days being very hectic as we’ve seen the effect of echelons in previous years and especially in stage two and three which the course is more or less “designed” for, then there’s a big opportunity for the team.
It’s always very hard and hectic to be in the right echelon but if it’s possible not to lose time on those in first three stages, then there’s a big chance to not only win the time trial, but also take the (leader’s) jersey. That would be not just for me but the whole team, a super-cool experience.