The Slovakian crossed the line first in the exhibition event in Dubai, following a two-up sprint with Ineos Grenadiers‘ Egan Bernal.
Behind them came Marc Hirschi (UAE Team Emirates) in third ahead of Ag2r Citroën’s Geoffrey Bouchard.
Seven seconds later, Elia Viviani led the bunch home ahead of Grega Bole.

The criterium race, which also featured Bernal’s Ineos team-mate Filippo Ganna, consisted of 30 laps of a 2.1km circuit, and took place as part of the Expo 2020 Dubai, the first World Expo ever hosted in the specified Middle East, Africa and South Asia region, where the ‘Made in Italy’ campaign has been created to showcase Italian excellence.

While this was Bernal’s first time in Dubai, the Colombian saying he was looking forward to once again wearing the maglia rosa he won in Italy in May earlier this year, Peter Sagan returned to the country having competed in the first-ever Abu Dhabi Tour, with this outing in the Middle East one of his last in a Bora-Hansgrohe jersey before his switch to Total Energies in the new year.

„This was a very special race, it is incredible to be here and have the opportunity to ride the Giro d’Italia Criterium at Expo 2020 Dubai. I am very happy I could take the win in this unique place,“ Sagan said afterwards. „I want to thank my teammates that kept the race under control. In the first part of the Criterium, I tried to be in the front and contest the sprints to win the Points Classification but I soon realised Elia Viviani was faster than me today. I decided to change my tactic. I tried to recover for 10-15 laps, it was a very fast race. Then in the last few laps Bernal, Hirschi and Bouchard attacked and I decided to follow them – it was the right move. After Bernal attacked again, I managed to stay with him and beat him on the line. I am very happy with this success!“
In other end-of-season criterium news, the Tour de France’s Saitama Criterium in Japan has been cancelled for the second year in a row due to Covid-19, the exhibition event showcasing the summer race’s top talents in east Asia.
@cyclingweekly

Tadej Pogačar lands in Trento: the European Champs turn yellow
Winner of the last two editions of the Tour de France, the 22-year-old Slovenian phenomenon will show off in Trentino from 8th to 12th September: the continental championships keep adding champions to their startlist
Another stage race giant is about to head to Trento for UEC Road European Championships in Trentino (Northern Italy) from September 8th to 12th, 2021: Slovenia’s Tadej Pogačar is set to feature among the greatest stars of the Continental event.
The Slovenian has won the last two editions of the Tour de France and showed his immense talent also in one-day races, winning Liège-Bastogne-Liège in 2021 and achieving an Olympic Bronze medal in Tokyo.
Pogačar is a champion who loves to attack, and that is exactly what he might have to do to shake up the plans of the puncheurs in the Trento circuit, and maybe even before, on the ramps of the Monte Bondone, the highlight of the in-line section of the Elite Men’s course.
The presence of eclectic talents such as Pogačar and Evenepoel brings an added tactical dimension to the race. The limited distance of the Elite Men Road Race route of Sunday, August 12th (179,2 Km) could make it more adapt to daring long-distance moves, something certainly in the style of Pogačar.
An exceptional climber and a talented time trialist, it is hard to find weaknesses in the 22-year-old rider from Komenda, central Slovenia. Pogačar will also participate in the European time trial, the 22,4km test of Thursday, September 9th, suitable for time trial specialists, providing another opportunity for Slovenia to aim big following the gold medal of Primoz Roglic in the Olympic Time Trial.

Elena Cecchini looks to add to family tally in Trento
A few days after the Olympic bronze medal was won by her fiancé Elia Viviani, the Italian went on reconnaissance on the route of the UEC Road European Championships in Trento, to which she looks with ambitions. „Watch out for surprises in the finale …“.

On August 5th, she was in front of the TV screen holding her breath for her life partner, Elia Viviani, who rode his way to the bronze medal in the Omnium at the Tokyo Olympics. On Sunday 8th, however, Elena Cecchini began working on her own ambitions for a medal, the one she will chase on Saturday September 11th, when the European Women’s Elite road race title will be up for grabs again in Trento.
The 29-year-old from Italy, vice-European champion in Alkmaar in 2019 behind Amy Pieters, has come to Trento specifically to discover the secrets and pitfalls of the circuit of 13.2 km (250 m of elevation gain) on which the road races will be held. Her ambition is to improve the result of the 2019 edition, and imitate Elia Viviani himself, who won that edition.
„Our coach Salvoldi had reported me about a challenging course, and he was right,“ says Elena Cecchini. – There might not be a huge elevation gain, but the circuit gives no respite. The Povo climb can make a selection as the laps sum up, especially in the women’s races.”
„I like the course – continued the three-time Italian champion – and I think it will be a beautiful European Championship, open and hotly contested. It could be resolved with a reduced sprint, but the finale in the city center is very technical: a small gap could make a difference with all those corners affecting the chasing effort. We will have to watch out.”

A course suited to strong rouleurs with a fast finish – a description that matches the skills of Elena Cecchini. „When racing with the National team, you always try to give your 110%, and racing at home is an extra motivation. It’s too early to say what our tactical plans will be, but I hope to have my opportunity. In the end, taking the win for Italy is the most important thing.”
The recent editions of the UEC Road European Championships often went down to the duel between Italy and the Netherlands, the latter clearly being the leading nation in World women cycling. In the Olympic race in Tokyo, however, the tactical stalemate ended up favoring an outsider, Austrian Anna Kiesenhofer, with Dutch Van Vleuten in second place and Italian Elisa Longo Borghini to the bronze medal. „The Dutch team is the one to beat, individually they are so strong. We watch out for each other a lot in these races, because we know our respective strengths. Compared to the Olympics it will be easier to control the race because relying on bigger teams and racing on a circuit makes things much easier to control. As Italians, we will also have the people’s support on our side: I am looking forward to racing in Trento.“ 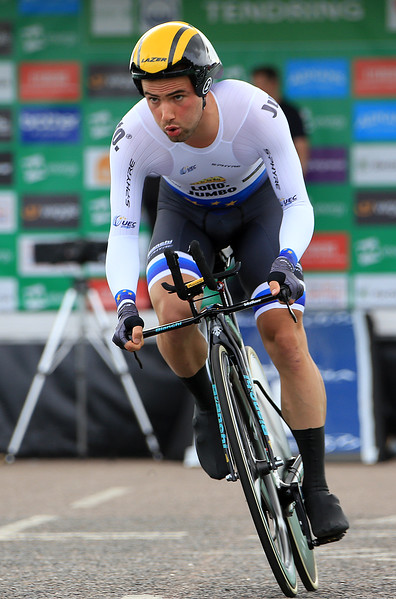 Gorizia, 23 May 2021 – Victor Campenaerts raced to an incredible 3rd stage win at this year’s Giro d’Italia for Team Qhubeka ASSOS, at today’s stage 15 ending in Gorizia. This victory followed his teammates, Mauro Schmid and Giacomo Nizzolo, triumphs on stages 11 and 13 respectively.
Team Qhubeka ASSOS, already having it’s best ever Giro d’Italia, started the 147km stage 15 with clear intentions to continue building on that success. From the gun, Campenaerts and teammate Max Walscheid were the first two riders to attack. After getting an initial gap, the race was then neutralized due to a mass crash in the peloton, which included Mauro Schmid. The young Swiss star was able to continue and finish but he suffered from multiple abrasions to his right side.
Fortunately, most of the riders that went down, were without serious injury, and able to continue. When racing got underway for a second time, it was again Campenaerts and Walscheid who were first to attack. This time a third Qhubeka ASSOS rider also got involved though, as Lukasz Wisniowski infiltrated the front group too.
15 riders forced themselves clear from the peloton and quickly built a race winning lead. With three riders up the road, Qhubeka ASSOS were in a favourable position despite being closely marked.
Coming toward the race finale, Walscheid, Wisniowski and Campenaerts began attacking and counter-attacking the break as the group did contain a strong mix of climbers and sprinters, who were possiblyon paper at leasr favoured for victory ahead of the Qhubeka ASSOS trio. However, it was the team work that proved the greatest asset on the day as the Belgian UCI world hour record holder managed to escape with two others in tow, Albert Torres (Movistar) and Oscar Riesebeek (Alpecin-Fenix), with 23km to go.

Campenaerts and Riesebeek were able to dislodge Torres on the final climb, as the rain came pouring down, adding further drama over the closing kilometers. From the top of the climb, the duo held onto a 15 second gap over their nearest chasers, and despite attacking each other a couple of times each, they went on to decide the stage in a two-up sprint.
Campenaerts had that extra kick in the legs to take a brilliant win, his first ever Grand Tour stage victory of his career.
Victor Campenaerts
I’ve been chasing a WorldTour, and specifically a Grand Tour, stage win for so long; having been four times second, twice third, once fifth, and I’ve always targeted victories in time trials. I’ve come so close but I decided to change how I race and focus more aggressively on racing on the road bike, and focusing a little less focus on the TT.
I am at my first Grand Tour with another objective and we’ve already had two victories with the team here. I can’t say that I helped Mauro that much in the break for his win but I helped Nizzolo for his victory and now I helped myself to a big victory – what a day! I had big, big help from the whole team especially Max and Wizzy, who were also in the break with me.
For two years we’ve speaking about Ubuntu in the team – I am because we are – which is about riding as a team. We cannot go alone, we’re stronger as a team together, and the spirit we have in the Giro is building up to an even greater spirit. Our mission as a team is to change lives with bicycles and the Qhubeka Charity, these successes mean that we play our part in changing the world.
I also hope that these victories is great exposure for the team, to keep the team alive for the future. It hasn’t been easy to keep it alive and we needed this, so I am just so happy.