Key information:
 Julian Alaphilippe will first showcase his recently attained rainbow jersey this Sunday at Liège-Bastogne-Liège. The Deceuninck-Quick Step rider comes to La Doyenne in great shape and is an obvious favourite to finally get a victory he was already close to in 2015 (2nd) and 2018 (4th). Four-times winner Alejandro Valverde will be one of the most-renowned rivals for the Frenchman.
 Fresh off his impressive triumph in Flèche Wallonne, Team Sunweb’s Marc Hirschi will try to prolong his winning streak. His companions on Wednesday’s podium, Benoît Cosnefroy and Michael Woods, will also be present in Liège.

By raising his arms last Sunday in Imola, Julian Alaphilippe made history. ‘Loulou’ was the first Frenchman to pull on the rainbow jersey since Laurent Brochard did back in 1997. The Deceuninck-Quick Step cyclist is now poised to set another landmark victory for his country this weekend in Liège-Bastogne-Liège. The last Frenchman who managed to write his name in the ‘palmarès’ of La Doyenne was Bernard Hinault in 1980, only months before claiming the rainbow stripes himself in Sallanches.
But history doesn’t come easy. Alaphilippe will contend against a man who knows how to win this race, and has rightfully done so four times already. Former rainbow jersey himself, Alejandro Valverde comes to Liège after narrowly missing top10 in the Tour de France (12th) and delivering at 8th place in the 2020 Imola UCI Road World Championships.
Both Valverde and Alaphilippe were absent at Flèche Wallonne, leaving the path clear for new faces such as Marc Hirschi. His runner-up last Wednesday at the Mur de Huy, Benoît Cosnefroy, defined the Swiss cyclist as “one of strongest riders in the world at this moment.” His stage win at the Tour de France, on which he was awarded the most aggressive rider prize, combines with his bronze medal in Imola and his outstanding triumph this week to tout him as a potential contender at La Doyenne. Cosnefroy himself will be present in Liège too, as will the other man standing in the podium of Flèche Wallonne, Michael Woods, who has already come close to victory in this race (2nd in 2018).
As far as star riders are concerned, is hard to look past the podium of the Champs-Élysées. All the top3 riders of the Tour de France will race Liège-Bastogne-Liège: the Slovenians Tadej Pogacar and Primoz Roglic, and the Australian Richie Porte. Between those who shone in Huy, it’s pertinent to highlight Dan Martin (winner of La Doyenne in 2013, as well as 2nd in 2017), Warren Barguil (6th in 2018) and Michal Kwiatkowski (3rd both in 2014 and 2017).

July 19 th 2019 – 18:02
Julian Alaphilippe celebrated the 100 years of the yellow jersey the best possible way by retaining the lead at the end of a time trial he dominated in Pau. First at all intermediate check points, he increased his advantage over defending champion Geraint Thomas by fourteen seconds.
Kasper Asgreen sets a time of reference
166 riders started the individual time trial in Pau. Four time world champion Tony Martin showed straight away that he wasn’t on a winning mood this time as he’s got other priorities as a domestique for Jumbo-Visma on this Tour de France. He was quickly overtaken by Chad Haga (Sunweb) and Kasper Asgreen (Deceuninck-Quick Step) who had left the starting ramp one and two minutes after him. The American rider almost caught Yoann Offredo (Wanty-Groupe Gobert), the first man on the road who started four minutes before him but it was Asgreen who set the first time of reference at the finish in 35’52’’ at the average speed of 46.2km/h. Hot favourite Stefan Küng crashed in a curve at the beginning of the race. The Swiss champion missed out on his chances to deliver a first stage victory to Groupama-FDJ.
Thomas De Gendt with the provisional best time
Although Matej Mohoric (Bahrain-Merida) and Nelson Oliveira (Movistar) scored faster times at the time check after 7.7km, it was Belgium’s Thomas De Gendt (Lotto-Soudal) who dethroned Asgreen from the hot seat at 46.5km/h after he saw his compatriot and national champion Wout van Aert (Jumbo-Visma) on the ground. 1.1km before the end, it was a serious crash for the winner of stage 10 in Albi who was taken to hospital by ambulance. Maximilian Schachmann (Bora-Hansgrohe) who was holding good intermediate time checks crashed in the same curve and reached the finishing line with great difficulty.

Foto: Gerhard Plomitzer – www.plomi.smugmug.com
Alaphilippe wins his duel against Thomas
The race of the GC contenders was another story. Rigoberto Uran (EF Education First) came close to dethroning De Gendt. At the first time check after 7.7km, Alaphilippe had the best time with an advantage of 6’’ over Thomas. It was the same difference between the first two riders on GC at the top of the côte d’Esquillot (km 15.5). The Frenchman continued to dominate the race even on the flatter section on the way back to Pau. He managed to beat Thomas by 14’’ and extend his lead in the overall ranking on the symbolic day of the 100th birthday of the yellow jersey.
@ASO

Épernay, Monday, July 8th 2019 – World’s number 1 Julian Alaphilippe powered to victory with a strong attack with 16km to go behind breakaway rider Tim Wellens in the hills of the Champagne area. A solo winner in Epernay, he took over from Mike Teunissen to become the first Frenchman in the lead of the Tour de France since Tony Gallopin in 2014. 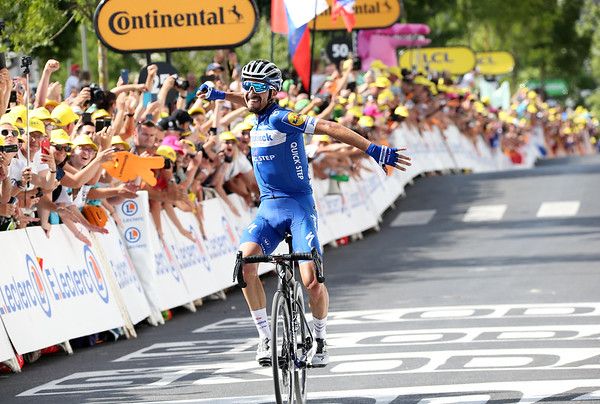 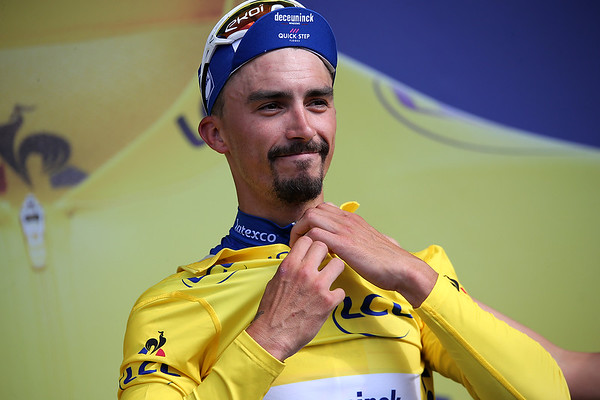 Huy, Wednesday April 24th 2019 – A year after overthrowing Alejandro Valverde from his throne, Julian Alaphilippe (Deceuninck-Quick Step) conquered the Mur de Huy again to take his second victory on La Flèche Wallonne. The race opened up much earlier than usual but the Frenchman was once again the strongest in the final climb to edge Jakob Fuglsang (Astana Pro Team), one of his most intimate enemies. Diego Ulissi (UAE Team Emirates) ahead of the youngsters Bjorg Lambrecht (Lotto Soudal) and Maximilian Schachmann (Bora-Hansgrohe). Julian Alaphilippe is only the fourth rider to win Milan-San Remo and La Flèche Wallonne the same year after Eddy Merckx, Maurizio Fondriest and Laurent Jalabert.

Julian Alaphilippe (Deceuninck-Quick Step), winner of La Flèche Wallonne: “Last year, it was my first big victory, ahead of a huge champion, it was a very special win that I’ll never forget. Now I’ve confirmed it’s one of the races that suit me the most. I felt strong expectations after my victory last year and with the fact that I’ve always been on the podium since the first time I came here. I tried to get away from the pressure after my good run early this season, to only focus on what I and the team had to do. It was harder than last year. It’s the kind of day that usually gets me very quickly pissed off, so I’m very happy. With the wind, it was very nervous from the start, it was mentally exhausting. On the final circuit, a rider in front of me did a bit of non-sense and he broke three wires on my wheel so I had to stop to change my bike and we were close to the finish… But we’ve done it all perfect with the team. I’m very happy.”

Huy, Wednesday April 24th 2019 – Like on the four previous editions, but this time with the World Champion’s jersey on her shoulders, Anna van der Breggen conquered the Flèche Wallonne Femmes for a fifth time. The Dutch rider waited for the final climb up the Mur de Huy to produce her effort, catching Newiadoma and eventually beating to line her compatriot Annemiek van Vleuten (Mitchelton Scott) while her Boels-Dolmans team mate Annika Langvad had to settle for third spot. 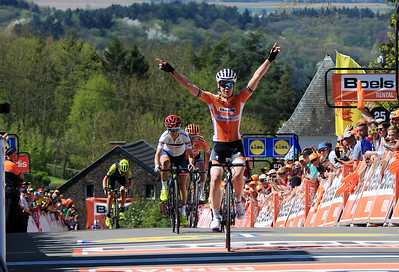