Six currently active riders took place on the final podium of the three Grand Tours: Alejandro Valverde, Vincenzo Nibali, Chris Froome, Nairo Quintana, Primoz Roglic and Richard Carapaz. If we extend the statistics to cycling in the 21st century, Carlos Sastre, Denis Menchov, Alberto Contador, Cadel Evans and Joaquim „Purito“ Rodriguez join them. But only one athlete, in the entire history of cycling, has achieved this treble and won the Olympic gold medal in the road race: Richard Carapaz, winner of the Giro 2019, 2nd in La Vuelta 20 and 3rd in the Tour 2021.

Richard Carapaz only returned to competition this year in the Volta a Catalunya (21st) at the end of March and was just as discreet at the Itzulia Pays Basque (19th), for the double reason that his 2020 season was ended late (November 8 with La Vuelta) and that he had big ambitions for this summer. In fact, he has perfectly managed his form: winner of the Tour de Suisse in mid-June, 3rd in the Tour de France and Olympic champion in July. It would have been more than enough to return and enjoy his glory at home. Before him, only one Ecuadorian athlete had won Olympic gold: Jefferson Pérez in racewalking in 1996, and a week after Carapaz, Neisi Dajomes did the same in weightlifting. But he has a still unfulfilled task that is close to his heart: to win La Vuelta.

Last year, instead of expressing any bitterness about the narrowly missed victory (2nd with a gap of 24“ to Primoz Roglic), he left the event by declaring: „I’m leaving very happy because I lived the end of the race with a lot of hope, and throughout the course, I saw a lot of Ecuadorian flags, it was beautiful. I felt special support. These were really great times!“ For the record, this was an autumnal Vuelta with a small number of spectators present. Richard Carapaz’s emotions are therefore likely to be increased tenfold with the support of the „responsible public“ (masked and concerned about social distancing) expected this summer, if he gets back „La Roja“, the red leader’s jersey he wore five days in 2020 before giving it a second time to Primoz Roglic at Mirador de Ézaro (in the ITT). He placed one last banderilla, sharp and sustained, on the final ascent of La Vuelta 20, the Alto de la Covatilla. „I finished this race with the same smile I had when I arrived because I gave everything, it was a beautiful La Vuelta, I had a lot of fun there“, he concluded at the end of this third participation in the Spanish Grand Tour.

Richard Carapaz was a bit late in becoming a hero of La Vuelta unlike the Giro d’Italia where he won (stage 8, Montevergine di Mercogliano), wore the white jersey and finished 4th overall in his first participation in 2018, before bringing the pink jersey all the way to Verona the following year. But it was La Vuelta that served as his first Grand Tour, in 2017, undoubtedly the edition that least favored Movistar, his team at the time (no stage victory, Dani Moreno the best ranked in the final, 18th). For his debut, Richard Carapaz attacked several times without success (his best result: 11th on the Angliru, the day Alberto Contador came out in style on the eve of his end of career). In 2018, despite his record of service at the Giro, he resolved to act as a teammate, in favour of Alejandro Valverde (5th overall after having occupied the podium for a long time) and Nairo Quintana (designated leader at the start, 8th at the finish).
He was still due to participate in La Vuelta 19, but he left the squad at the last moment following a crash in a criterium he rode in the Netherlands the previous Sunday. He was on the way out from Movistar, the team that had accompanied him in his professional debut following his apprenticeship at Lizarte. He often reiterates, citing his former amateur team in Navarre, that he owes the launch of his professional cycling career to Spain. Last year, he was equally grateful to Chris Froome, his Ineos teammate who had helped him despite the difficulties encountered in his physical reconstruction following his terrible accident in 2019, but he did not have the strongest armada to support him.

This time, the British team are lining up particularly impressive names on paper: Egan Bernal, Richard Carapaz, Adam Yates, Pavel Sivakov, Tom Pidcock, Jhonathan Narvaez, Salvatore Puccio and Dylan van Baarle! Carapaz is therefore not the only Olympic champion freshly covered with gold in this squad since Pidcock, 22, cyclo-cross prodigy and already protagonist of the great classics, won the MTB event in Tokyo.
„It is a great honour for us, the organisers, that Team Ineos has fielded such a selection of champions“, said Javier Guillén, General Manager of La Vuelta. „It says a lot about their ambitions. Bernal and Carapaz are the two current leaders in South American cycling and it is a continent that is dear to us. Both have the capacity to win the event like two Colombians did before them [Luis Herrera in 1987 and Nairo Quintana in 2016]. Carapaz is now an icon with its Olympic title. The mastery with which he won the road race has thrilled aficionados all over the world, I think. We also appreciate his kindness and his smile. He has everything to be a hero of La Vuelta.“ 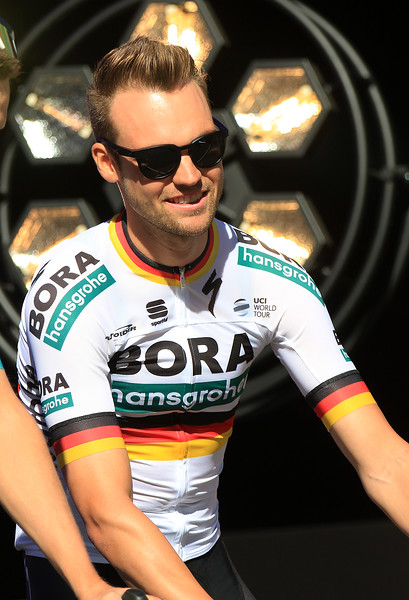 The final mountain stage of La Vuelta 20 has crowned David Gaudu (Groupama-FDJ), who claimed his second stage win atop the climb to the Alto de La Covatilla, and Primoz Roglic (Jumbo-Visma), who managed to save La Roja despite a powerful attack from Richard Carapaz (Ineos Grenadiers). The Frenchman made his way to a solo victory after spending the whole day at the front of the race, dropping all his breakaway companions on the last slopes. Roglic lost 21’’ to Carapaz but he still leads the GC with a 24’’ gap on the eve of the final stage to Madrid. The Slovenian champion is set to dominate the overall standings for the second year in a row.
The final climbing challenges of La Vuelta 20 inspire many attackers. 34 riders get away after 19km of battle. Among them, David de la Cruz is the best classified on GC (10th, +9’29’’) and he enjoys the support of three UAE Team Emirates riders: Rui Costa, Sergio Henao and Ivo Oliveira. Groupama-FDJ’s David Gaudu, already winner at La Farrapona, is another GC threat (11th, +10’51’’).
Ion Izagirre (Astana) also chases his second stage win in La Vuelta 20, while Pascal Ackermann (Bora-Hansgrohe) rides at the front on some unfriendly terrain for his sprinting abilities. Guillaume Martin (Cofidis) shows his polka-dot jersey again at the front, with the support of Victor Lafay and José Herrada. Team Sunweb also manage to put three riders in the breakaway: Mark Donovan, Michael Storer and Jasha Sütterlin.
Movistar put pressure on Roglic
UAE and Groupama-FDJ riders drive the breakaway to open a maximum gap of 4’07’’ at km 68. Primoz Roglic’s Jumbo-Visma set the pace in the bunch over the first ascents of the day, until Movistar take over with 61km to go.
The Spanish team put the hammer down and immediately create splits in the bunch. Richard Carapaz (Ineos Grenadiers) is among the riders off the back but he quickly returns with the help of one teammate. Movistar maintain a hard pace over the Alto de Peñacaballera and the gap is down to 2’17’’ at the bottom of the penultimate climb of the day, the Alto de la Garganta.
Soler on the move
Marc Soler (Movistar) accelerates 31km away from the line. Imanol Erviti, who was part of the breakaway, waits for him. They trail by 30’’ at the summit (26.2km to go). The GC group, led by Jumbo-Visma, is 1’ further behind. Soler eventually bridges the gap with 19km to go. The peloton then trail by 2’15’’.
Gino Mäder (NTT), Mark Donovan and Ion Izagirre enjoy a cobbled uphill section to attack their breakaway companions 18km away from the line. They reach the bottom of the final climb to La Covatilla (11.4km, 7.1%) with a 40’’ lead while the gap to the bunch is up to 4 minutes.
All in for Gaudu and Carapaz
Ion Izagirre accelerates twice, with 7km to go and 1km later to drop his two companions but David Gaudu gets back to him 4.5km away from the summit and immediately attacks to solo away to his second stage victory.
Hugh Carthy (EF Pro Cycling) opens up the GC battle inside the last 5km. Richard Carapaz (Ineos Grenadiers) goes with 3.5km and nobody can follow his powerful attack. Primoz Roglic enjoys the support of breakaway members Lennard Hofstede (Jumbo-Visma) and Marc Soler to limit his losses and save La Roja for 24’’.