Second consecutive victory in the Garden Hotels-Luxcom Mallorca Cycling Challenge for the Intermarché–Wanty–Gobert rider, Kobe Goossens, after winning the Serra de Tramuntana Trophy, starting and finishing in Lloseta. The Belgian team thus adds its third victory in the four Trophies held so far, after the success of Rui Costa on the opening day.

The Belgian rider went on the attack three kilometers from the finish ahead of the small group of the best, including Lennert Van Eetvelt (Lotto DSTNY) and Ilan Van Wilder (Soudal Quick-Step), who completed the podium of the day, ahead of Lilian Calmejane, the winner’s teammate.

The Serra de Tramuntana Trophy initially had 155 kilometres, but the organisation, due to the red alert existing on the Island due to snow, has reduced it to 123. The first attacker of the day was the Dutch champion Pascal Eenkhoorn (Lotto DSTNY), who Matteo Trentin and Rémi Cavagna joined, among others. But the peloton reduced the leading group for the first ascent of Coll de Femenias. That’s where the race really exploded.

Different escapes where Julian Alaphilippe, Goossens, Calmejane, Carthy were always involved, in the slippery descent new attempts that do not bear fruit. Four kilometers from the finish line, Calmejane lit the fuse. The French Intermarché-Circus-Wanty runner made a small hole that held him for a long time, but he was eventually caught up. From that moment on, a strong attack from his teammate Kobe Goossens. The advantage was immediately great, managing to hold out until the finish line in a gruesome day marked again by cold and rain.

Colombia’s Santiago Buitrago who had his breakthrough at the Saudi Tour last year wants to avenge himself on GC.

Before winning the first two editions of the Saudi Tour, Phil Bauhaus (2020) and Maxim Van Gils (2022) did not yet have an overall stage race victory to their credit. AlUla Saudi Arabia is a new El Dorado for cycling, where dreams of greatness take shape.

The other sensation of the 2022 edition, the Colombian Santiago Buitrago, kept a feeling of unfinished business. Winner of the second stage in Abu Rakah, the final victory had eluded him on echelons. Since then, he raised his profile by winning stage 17 of the Giro d’Italia (12th on GC) then stage 1 of Vuelta a Burgos. He wants to take revenge on the Saudi Tour, so his team Bahrain Victorious has enrolled him again. He will be the hot favorite on the start line at AlUla International Airport on January 30.

The teams of the Arabic Gulf are particularly motivated by the idea of making a name for themselves in the region. Bahrain Victorious has also called up very fast men for the stages likely to arrive in a sprint: Jonathan Milan, Andrea Pasqualon, Dusan Rajovic and Heinrich Haussler. Similarly, UAE Team Emirates is aiming for bunch sprint finishes with Pascal Ackermann and the general classification with Davide Formolo, supported by new recruit Felix Grossschartner.

Two teams established for some time in professional cycling have recently concluded partnerships in Saudi Arabia: Movistar, with the national cycling federation, hence the designation of its versatile new rider, the Portuguese Ruben Guerreiro, as leader for this race, and Australia’s only WorldTour squad, now named Team Jayco-AlUla. The latter returns in AlUla with Dutch sprinter Dylan Groenewegen after he won two stages last year. “We’ve got a couple of options with some younger guys for the general classification but the big focus is to build the sprint train around Groenewegen”, Team Jayco-AlUla’s sport manager Matt White explained. “Every race is important but obviously when your team’s sponsor hosts the event as well, it adds some motivation. We’re going there to win stages and showcase our sponsors in a good way.”

As part of the Asia Tour, the event also aims to provide access to the top level to the best squads of the continent, namely Terengganu Polygon from Malaysia and Team Ukyo from Japan. This time around, the national team of Saudi Arabia will ride at home !

The 16 teams and main riders of the 3rd Saudi Tour, from January 30 to February 3rd:

The young Dutch runner from EF Education-EasyPost, Marijn Van den Berg, 23, has claimed his first success as a professional, at the finish line of the Ses Salines-Alcúdia Trophy, ahead of the British Ethan Vernon (Soudal Quick-Step) and the Eritrean Biniam Girmay (Intermarché-Circus).

The four rode together, at which point the pace in the peloton was set by the Intermarché-Circus-Wanty with Girmay in the lead, being returned to the discipline of the group on the ascent to Sa Batalla, where a select group formed in the lead with just 40 units. 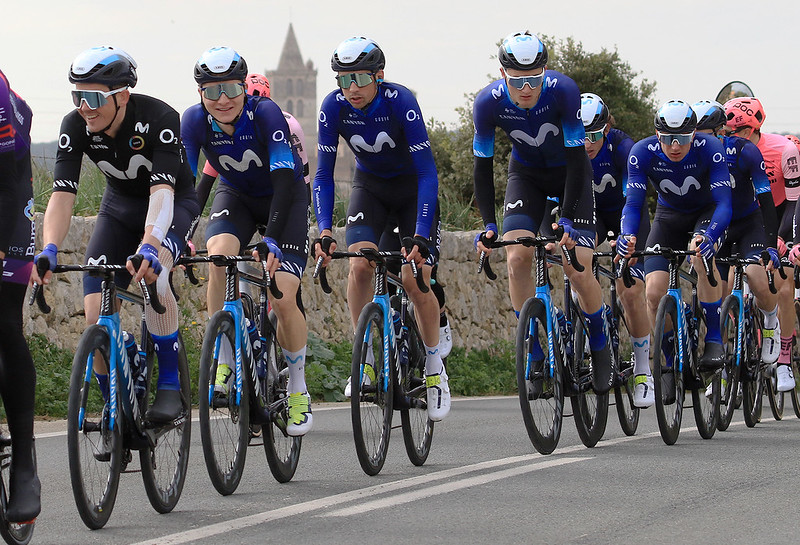 The peloton reach the streets of Alcúdia in a group where Van den Berg came out ahead of all his rivals in the last corner, which was located just fifty meters from the finish line, achieving his first victory as a professional.

This edition will take place between Wednesday the 25th and Sunday the 29th, with the final participation of twenty-one teams, after the last-minute withdrawal of the Kiwi Atlántico Cabo de Peñas, due to license problems with the UCI, and the presence of one of the Outstanding riders on the international cycling scene such as the double French world champion Julian Alaphilippe (Soudal-Quick Step), Guillaume Martin, the Herrada brothers (Cofidis), Juan Sebastián Molano, Tim Wellens (UAE), Emmanuel Buchmann (Bora-Hansgrohe) , Biniam Girmay (Intermarché Circus Wanty).

One of the main novelties for this edition is that live television returns. From Wednesday to Saturday, from 3 to 4:30 p.m. and on Sunday, from 12:45 to 2:15 p.m., through Teledeporte and Eurosport, adding the GCN platform and the Spanish International Television Channel, more than seven hours that will Mallorca in the showcase of millions of viewers from all over the planet, with a wide technical and human deployment.